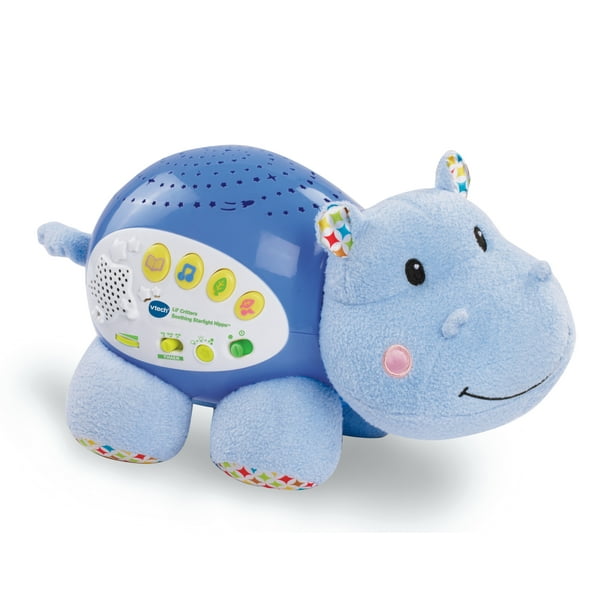 We aim to show you accurate product information. Manufacturers, suppliers and others provide what you see here, and we have not verified it.
Sweet dreams are ahead with the Lil' Critters Soothing Starlight Hippo by VTech. This cuddly hippo projects a vibrant starry night sky onto the ceiling in four different colors to the sounds of peaceful tunes, seven nursery rhymes, nature sounds and lullabies. Colorful light effects enhance visual awareness, while the comforting sounds and songs help soothe them to sleep. This helpful hippo also responds to your baby's cries with calming music. The parent-friendly volume and timer controls let you choose how loud and long the sounds play. Sleep tight, little one!

I love the Vteck Lil' Critters Starlight even better than I thought but most important is that my grandson Gabriel loves it. He really loves the color lights and the soft music. We can really tell he is very curious about the splash of the color changing display.

I honestly don't know who loves it more, my baby or me! It has a lot of features from the songs to story telling and the color changing lights. It is very calming and helps my baby calm down and start a relaxing ambience to help him fall asleep. [This review was collected as part of a promotion.]

My grandson cant sleep without his Hippo!

This Lil' Critters Soothing Starlight Hippo by Vtech is absolutely adorable! Since my grandson is not a fan of his crib, I was super excited to get this soothing toy, in hopes that it would make him a little more content while being in his crib. I put my grandson in his crib, turned on the Hippo and immediately he was so fascinated! He was staring up at all the lights projecting off of the ceiling. My grandson actually fell asleep while listening to the melodies. The music is very soothing and I also like that it has the timer and the volume control. When he started to fuss, the Hippo turned back on, soothed him and back to sleep he went! I was so amazed! There are so many different functions on this toy from the various light settings, songs, melodies and nature sounds! I would definitely recommend this Soothing Starlight Hippo to anyone who has a little one as well as anyone who is currently expecting! This would also make a fantastic shower gift! Thanks Vtech for continuing to make amazing products! [This review was collected as part of a promotion.]

I was not expecting to be so amazed by this product. I have 2 young children who have not let this hippo go since I took it out if the package. The stars and shapes fill the entire room with the projection, it has multiple functions including volume, timer, sound, and story mode. The sounds are clear and very peaceful. The stories are some I remember my mother reading me. I wish I would have had one for my older children, and I'll be buying one for all my family members with young children. [This review was collected as part of a promotion.]

This is amazing. My baby would always fight bedtime. Since getting this I lay her down turn it on and she’s asleep within 5 mins. I got my sanity back. It has all different feature. Nature sounds , stories, lullabied and songs. It has a nice light projected out of the top and even has a feature that if she starts to stir it will activate. Best thing ever. [This review was collected as part of a promotion.]

great features, we love it!

I received the VTech Lil’Critters Soothing Starlight Hippo to test. The hippo is blue with darker blue plastic back that has the stars on it, so that light can project through. On the side is the setting buttons that you can use to adjust to your preference. You are able to adjust how loud or quiet you want it to play and how long you want the music to play which can be changed from 15 min to 30 mins to 45 mins. You can also choose how you want the lights to be displayed, it has 6 different settings with 4 different colors. As for the music, it can play “100+ songs, melodies, sounds and phrases. There are so many options.

One really funny thing is that I didn’t read the instructions before using the hippo since my daughter was so excited to try it. During the day, my daughter was talking and it started playing music and doing the starlight. We just thought that was odd. Then it happened again and again, when my daughter was talking or we were talking to each other. Then we realized that its voice activated. It’s meant to activate and turn on to sooth your child when they wakes up and cry in the middle of the night. How cool is that? I can see how that might bother other people, but I think it’s a great idea. Lately, my 18 months old daughter has been getting up multiple time in the night. The hippo has helped to put her back to sleep. Also, I’ve started to use it to establish a bed time route with her that she is getting used to.

My daughter really likes the hippo. When the star lights came on, she said pretty, pretty in her little baby voice. The music really did sooth her and helps her fall asleep. This is definitely a nice gift to give to young mothers.

Overall, my family and I love this soothing starlight hippo. It does exactly what it supposed to and keeps my daughter entertained and calm. We love that we can control the setting to our preference and the voice activation is awesome.

Con: none [This review was collected as part of a promotion.]

My son absolutely love his little critter hippo! There are many settings and thankfully you can adjust the volume as well. It is easy to use and his sister have already mastered the functions. It has buttons for story time, music, natural sounds, and a mix of natural sounds and music. You can choose the color of the light and set a time for it to shut off (15,30,45mins). [This review was collected as part of a promotion.]

must have baby item

the lights are very bright and fill up the entire ceiling in our room, my daughter loves laying down watching the lights and listening to the music, it took her all of five minutes to fall asleep with this toy, I am very glad I bought this, if it ever breaks I will definitely buy a new one

This hippo is such a cute little toy. Baby boy isn’t too sure about all of it’s features just yet, but he’s definitely interested. He gets excited for a few of the songs/nursery rhymes. It gets fairly loud, the buttons are easy to work...they have pictures for what it’s supposed to be for. I like the timer! It hasn’t automatically played anything to baby crying yet so I’m not sure how that works even after reading the instructions. The only thing that I’m not a big fan of is that you have to keep pressing the button after ever song or sound and you have to click multiple times to change to a new sound. [This review was collected as part of a promotion.]

Written by a customer while visiting vtechkids.com

1. Yes
by GlennP
2. Yes, batteries are included.
by CommunityAnswer
2 Answers

1. Hi Joi, Yes you can see it on the ceiling. The unit has a light control that lets you choose from 6 lighting effects. Best Regards, Vtech
by VTech_Support
2. Yes but they are run down when you get the hippo. We returned one hippo thinking there was a defect and when we had the same problem with the second hippo figured out it was the manufacturers batteries. Fresh batteries cured the problem and welove this item it has so many neat features for the price.
by SpecialOma
2 Answers

1. Hi, no I am sorry you can not turn off the sound sensor
by VTechKids
1 Answer