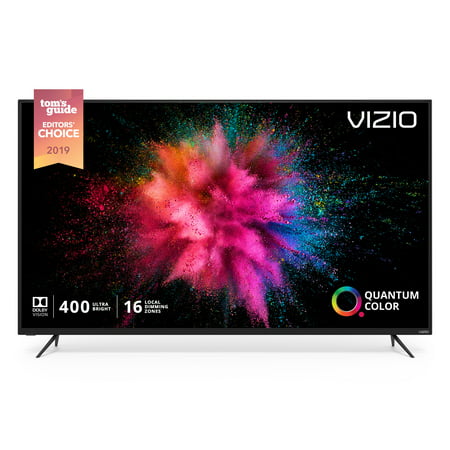 We aim to show you accurate product information. Manufacturers, suppliers and others provide what you see here, and we have not verified it.
Experience a world of extraordinary color with the all-new VIZIO M-Series? Quantum 55? Class (54.5? diag.) 4K HDR Smart TV. The first in class to utilize cutting-edge quantum dot technology, the M-Series? Quantum delivers cinematic color intensity as more than one billion colors jump to life. UltraBright 400 produces bright, detailed highlights at up to 400 nits of brightness, while VIZIO?s powerful Active Full Array® backlight offers 16 local dimming zones, resulting in deep black levels with stunning detail and contrast. Featuring VIZIO?s SmartCast? with Apple AirPlay 2 support and Chromecast Built-in, streaming, controlling, and sharing your favorites has never been easier? no extra streaming devices or remotes needed. And every M-Series? Quantum makes a great smart home companion, with voice control support for Siri, Google Assistant, and Amazon Alexa. With a breathtaking picture and brilliant streaming solutions ? the M-Series? Quantum is the perfect entertainment centerpiece for any home. VIZIO 55" Class 4K Ultra HD (2160P) HDR Smart LED TV (M557-G0) (2019)

The color and sound are great, I'm pleased with the apps that that come with it.

It was a great tv

Clarity so real/life like you feel as if you could touch the action. Color is breathtaking on nature programs and the interactive function available on programs is a hoot. Have had several Vizio's over the years - they just keep getting better!

This TV is a good price/performance ration. Lots of access, 4 htmi, external antenna, blue tooth, builtin Chrome Cast, WiFi internet, maybe others I haven't found. Input is easily switched, but you do have to have a quick finger on the button. Excellent color.

I got his TV for $429 on sale the first week in November. The TV is built well even though it seems to be mostly plastic (I don't really care about the material they have used, as much as I care about the quality of the picture). I read a review that said this TV tilts toward the viewer, I don't see any lean at all, so maybe the review had a problem with the legs. Speaking of the legs, they seem sturdy enough to hold the TV w/o any problems (the review I read said the TV was wobbly, but that wasn't the case on my TV). So, it was an excellent buy for me since I use it in my man cave for gaming, movies, and television. I had a two year old 55" Vizio M series HD but not HDR or 4k and this TV's images are so much better it's hard to imagine, the picture is crisp and clear and it's really remarkable by comparison. If you ever wondered, like I did, if 4K was worth it over HD (1080p), it is so worth it, much more vivid, much more clear. And it has voice control, although I haven't tried it. The sound, much like the 2017 model is OK, but I normally wear wireless headsets when I play games and watch TV since my game room is next to our living room, so I don't use the speakers all that much anyway. IF it was a primary TV, I'd suggest you get an external speaker system, sounder or whatever. I LOVE that this TV has Chromecast and Airplay casting, that's a great benefit to me. Love that I can cast my iPad or even my iMac onto the screen and surf with my mouse and keyboard input mirroring my session. Never thought I'd want a 55" screen for surfing, but it works seamlessly and I enjoy popping into a video full screen on the TV. I also appreciate that this TV has four UHD/HDR-Ready HDMI Ports - I only had one on my 2017 model and it was dedicated to my XBOX which dumbed down my regular viewing. Smart TV - Review I read didn't care for the speed of the smart TV functions, but I have an Apple TV hooked up and it isn't much faster and neither is slow IMHO. AND yea for Vizio's Smartcast which has the same features of Apple TV or Fire TV, works great and it's supplemented by a dedicated channel/input called "Watch Free" that sorts out all the paid television options available from other sources I don't have (like HBO or Cinamax for example). And finally the remote is laid out well, works well, and is pretty straight forward. Using the DPAD design, it's easier to use than Apple's swiping pad - much more specific in selecting what you want to do. Kudos Vizio. So the pros are the great pic, low lag rate for gaming, streaming capabilities, connectivity, design, great remote, and HDR. The only CON I have noticed is the speakers aren't that loud on some channels. Highly recommended.

After viewing this 4K TV in the Sam's Club store on several occasions, I was happy to find that this model was on sale. I was ready to buy it at the listed price, so this made the deal a bit sweeter. I have hooked this up in my home and I love the picture. I paired it with the Vizio 2.1 soundbar, and it is a great combination and recommend it with the TV. So far I've used it with a BluRay DVD player, and the picture is great with it... also, a Roku 4K running Netflix with the 4K signal has a beautiful picture. Basically this is a premium TV for a bargain price... no regrets in the purchase, can't wait to get it wall mounted.

We bought this TV las month. Very light weigh the quality is awesome we got $50 gift card with this purchased. Very happy with this buy.

Great picture, miss on the Apps

Overall, great TV. Don't absolutely love the cast feature and think for the price and brand name Vizio could come with better apps (no Disney+ or ESPN). Picture and refresh rate are great for sports and action movies. Got it on sale around Black Friday so happy with the price.

It's beautiful and Bright, but it kicks me off shows sometimes, hard to turn on other times, just spazzes out sometimes, enough to make you upset you spent 500 for a tv that spontaneously turns off your shows. Other than that, tons of channels, awesome layout, works quick, I like it overall because it is pretty, especially my kids shows really colorful.

Written by a customer while visiting samsclub.com
00

Comment from VIZIOEntertainmentExpert - 12/23/2019
Hello Jonathan, this behavior of the television turning off is not usual behavior. We’d really love the opportunity to have our tech support team run through some troubleshooting steps to see if we can get the TV up and running for you. When you have a free moment, they’re available through text message, chat, or over the phone. Just go to support.VIZIO.com and click on ‘Contact Us’.
Average rating:1out of5stars, based on0reviews

After 2 weeks of use the tv wouldn't turn on without unplugging and plugging back in to the electrical outlet. This has happened about 6 times in the last month. After reading reviews, this appears to be a common issue. Will contact the Vizeo service help line the next time it I have the issue.

Written by a customer while visiting samsclub.com
00

Comment from VIZIOEntertainmentExpert - 12/16/2019
Hello Camf, you should not need to disconnect this television from power. We’d really love the opportunity to have our tech support team run through some troubleshooting steps to see if we can get the TV up and running for you. When you have a free moment, they’re available through text message, chat, or over the phone. Just go to support.VIZIO.com and click on ‘Contact Us’.

1. This setting would depend on the kind of content being watched. Please reach out to our customer support at 877-878-4946 for assistance.
by VIZIOEntertainmentExpert
00
1 Answer

1. This television does not have a Google Play application. We are continually evaluating new applications for addition to the SmartCast screen. In the meantime, you can cast any Chromecast enabled applications to the television from your mobile device.
by VIZIOEntertainmentExpert
00
1 Answer

1. This television has an effective refresh rate of 120 Hz.
by VIZIOEntertainmentExpert
00
1 Answer