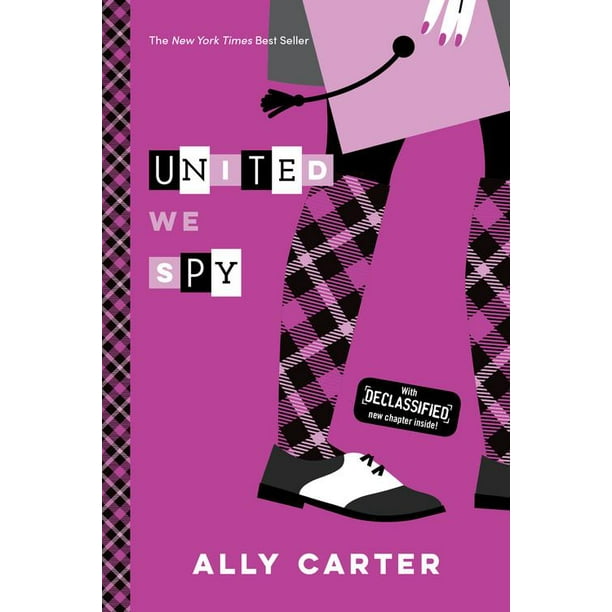 Get ready for the Gallagher Girls' most astounding adventure yet as the series comes to breathtaking conclusion that will have readers racing to the last page.

The Great Gallagher Girls Reread/Read I have arrived. The last one. I am so much more emotionally attached to characters like these ones who have been with me for so long than to characters from stand alone novels. I have watched these girls grow and mature from giggly sophomores to seasoned operatives in their senior year. I have laughed with them, cried with them, and now I have to let them go. I always knew I would. I just never imagined it would be so hard. Cammie has recovered from her subconscious a list of very important names identifying the key players in the Inner Circle of the Circle of Cavan. They are very close to taking them down and ending it all. But there are other people who want that list from here. Who will stop at nothing to get it. There was a point of this book that reminded me of Harry Potter and the Deathly Hallows: Cammie and her roommates along with Zach leave the Gallagher Academy on a dangerous quest and return for a final showdown. But I believe this book stands on its own merits too. United We Spy is a fitting title for this novel and perfectly describes how our team stands: together. They are a united front against the wrongs, the evil being committed against the world. The girls are just as tough and just as smart as any boy and can hold their own against the men and also the crazy ex-Gallagher Girl after them. I can't help but feel a bit proud of who they are and how far they've come. I love their friendships, their sisterhood and how they will do anything to protect each other. And while I love Zach, and I love him with Cammie, he is not as important to the overall theme of friendship and sisterhood so central to this story. This sixth and final Gallagher Girls story is another action packed adventure that I have come to expect from Ally Carter. There were a couple of things I picked from the start, but there was more I didn't expect. I cried watching my Gallagher Girls graduate and reading Liz's perfect speech. I felt like a Gallagher Girl. And Gallagher Girls are forever.

I have to say that this is one of my favorite series - The Gallagher Girls. Love it! United We Spy is the 6th and final book. Ally Carter ends the series very well-you have to read it! Cammie still doesn't have all of her memories, but she's got enough knowledge to know what she wants to do: bring down the Circle of Cavan. Preston's father is part of the Circle, but Macey is convinced that Preston is not evil. She convinces the girls to fly to Italy and get him. In the process, they walk into the middle of a CIA operation and Preston is arrested along with his father. Preston's father refuses to say anything during interrogation but does agree to talk to Cammie. She agrees to talk to him after being lead to believe that Preston requested her presence. She is drugged and taken to a secret prison. When Cammie comes face-to-face to Preston's father, she is given a clue: Liz is really smart. Then, the prison is compromised and Preston's father is killed while Cammie barely escapes. The girls are now convinced that Preston is in danger. They must rescue him, figure out the clue, and bring down the Circle of Cavan. I'll ruin the book if I say anything else, but I can say that there are plenty of action scenes and a doozy of a conclusion. Ally Carter does end the series and it's well done. You won't be disappointed. There's also a short story, "A Gallagher Wedding" that was included in some copies of the books. I have copies of the story if you finish the series and want to read it. If you haven't read this series, you are missing out! It totally rocks!

Warning: This is NOT a spoiler free review! This is, without a doubt, one of the best books of the series. This book had me laughing, screaming and crying. One of the things about this book that I love are the characters (minus the bad guys, of course), the character development is fantastic! The plot was also very awesome and realistic. There's really no cons for this series (well, at least in my opinion). Now its time for the Zammie parts! Out of all the amazing Zammie moments that happened through out the series, this book takes the cake. I love the part when Cammie walks into her dorm and Zach is sleeping in her bed, wait for her! and the part when they were in the cave, and the part when Zach was frying bacon with his shirt off and he was comforting Cammie. I was definitely not disappointed with the romance in this book. And here is something really cool, before the book came out I was talking to my mom (who also loves the GG books) about who wouldn't be awesome is Grant and Jonas from the second book to come back but I didn't get my hopes up. Then when I was reading the United We Spy guess who was in it. Yep, Grant and Jonas came back! And I'm not gonna lie - I screamed. It was like a dream come true. Another thing was when they found out who Zach's dad is, which was another part of that I screamed. I DID NOT SEE THAT COMING!!! And hats off to Professor Buckingham! She was so awesome! Who else just loved her in this book? Let's just take a moment and give Professor Buckingham and the rest of the teachers at the Gallagher Academy for Exceptional Young Women a round of applause. *claps* And does anyone remember the guy from Interpol who gave Cammie his card in book one? He comes back. I never liked him. I thought in book one that he would be some character who shows up once and is never seen again - boy was I wrong. I was also really glad that the only people that did die were the bad guys like Zach's mom and Dr Steve. Zach's mom is crazy! I knew it! One more thing before I go, who else loves Preston? All in all, this is an amazing book. I love it and I recommend this series!

This book was amazing,...

This book was amazing, it somehow managed to tug at all my heart strings and hold my breath. I'm so sad that this series has ended, but happy all the same.

The last book in a series I didn't want to end! UNITED WE SPY picks up right where OUT OF SIGHT, OUT OF TIME ends. Cammie and her friends are seniors now and basically end up taking The Circle on on their own. This is a very action-packed book with lots of shooting, bombs, and fighting. As much as I loved this series, I didn't love this book as much as the others. I often felt confused during this book and it felt like loose ends from the rest of the books were being tied up, but not cohesively. And although it does end on a positive note, I felt that the characters and the story lost some of its charm during this book. It really did feel like, "let's just get this wrapped up and over with." It wasn't a satisfying end to the series for me. I still love the Gallagher Girls, I just felt like they went missing from this book.