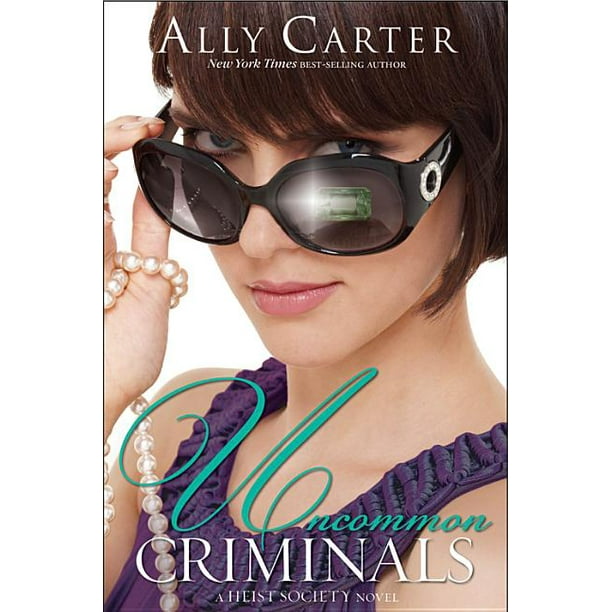 Katrina Bishop is one ...

Katrina Bishop is one of the youngest, smallest, but surely one of the best thieves in the world. Her currently heist is one of biggest thus far is for the world's biggest emerald: the Cleopatra Emerald. Many thieves have attempted to steal the jewel and all have claimed that it is cursed. Even Uncle Eddie forbids Kat to even try. But things get personal for Kat when she gets conned. A thief does not get conned. There is a low chance of me reviewing this book without gushing like a lovestruck teenager. Uncommon Criminals just hit that sweet spot that no other book for the past month had managed to strike. The prequel, Heist Society, was okay, decent, but no means better than Carter's Gallagher Girls series. Uncommon Criminals, on the other hand, was almost perfection. Ally Carter seems to enjoy teasing the audience by giving them enough clues that they think they've figured everything out. But then out of the blue, up pops an important fact that turns an entire situation around. A lose becomes a win. A clumsy fight because an orchestrated scene. A sweet innocent Kat becomes a focused thief playing her part without one thinking the wiser. And yet, it was just one single thread of the whole series that made my day. Kat kissed Hale. If I didn't look so ridiculous fist-pumping, I would do it. In the Gallagher Girls series, it's taken readers several books for the romance to develop to be called a romance. I was expecting the same slow trickle of a smile, a touch, a hug, a kiss, for this new series. There was the same tension and the same voice in my head chanting "Come on, you know you want to kiss the boy", but miraculously Carter decided to show mercy this time. Ally Carter always keeps me in suspense in her well-crafted novel that screamed details. Her originality astounds me at times and the humorous names for cons leave me grinning. When Carter intentional leaves out very important facts, I found myself not being the slightest upset. Every author should have a trick up their sleeves and Ally Carter has many tricks. What came after each plot twist only made the reading experience more enjoyable. Uncommon Criminals gave the readers a better glimpse of Kat's inner turmoil about being a thief. It's like delving into the murky mind of a brilliant girl who's lost her own focus on her life. And as Kat begins to be submerged into her thoughts, her family and friends pull her out. The strength I found in their relationship was amazing and brought out some of the smaller character developments, which I instinctively search for in series. I think you get the gist right? I loved this book. The End.

Reviewed by ylin.0621ylin.0621
Written by a librarything.com customer.
Helpful?
Average Rating:(5.0)out of 5 stars

Aw, man. This book is so awesome. So freaking fun and exciting without being any bit unrealistic. I was expecting it to be just another robbery or major 'job' just like the first book. Just another Kat-adventure. Some more action and adios. But no, what I got was a way better story, full of surprises, filled with twists and turns and shocking discoveries. I liked the first book, but didn't love it. But this was beyond that and beyond any expectations. One of the things I love the most is the storytelling. The way the story is narrated as if it were a movie. At least that's how I see it. No narration I've ever read is as original and fresh as this one. Plus, in this sequel the action and the plot are fascinating! Not a single boring moment, not a single boring character, not a single moment of dullness. Just plain fun coming at you in all the forms, and complications to spike that fun and top it with some more. With all its entertainment, Carter still manages to make a very layered story. You can feel Kat's fear of becoming what she doesn't want, you can see the deepness and complications in her relationship with Hale, you can taste a bit of the sweet friendship that exists in this uncommon crew and you can smell all the sneaky tricks that are to come. A seemingly just-fun book, is actually a very deep and provocative read. I cannot wait for more!

Reviewed by YABlissYABliss
Written by a librarything.com customer.
Helpful?
Average Rating:(5.0)out of 5 stars

This is a great book! First you have a SMART girl raised in a family of thieves and con men. Then you have Gabrielle (her cousin), Hale (a love interest with money and the means to get where they all need to be fast), Simon (another cousin and boy genius) and a great tale about a emerald - that's cursed. Kat is tricked into stealing one of the emeralds when a older woman (with a connection to 'The Family") uses a forbidden name making Kat think the woman is for real and therefore deserving of being helped. When she finds out that she has been tricked she decides to steal the emerald back and from there we travel with Kat from Brooklyn, NY to Lyon, France and on to Monaco - the tiny country with the tightest security. I really liked how the time line of the adventure is used to set up the story and each section of the story. It makes it easy to keep everything straight in the story and to keep both sections of the story apart. Ideal for kids 13+, the main character Kat in the book is a 15 year old girl. Trained in the "art" of thieving and belonging to a Family who has honed the craft for centuries. Kat has left the family crime life behind to use her skills to steal from the criminals and give back to the original owners (picture paintings the Germans stole from Jewish families and kept or made to disappear). Now she needs to learn to tell the good from the bad to keep from being conned.... The Heist Society Series and another series "The Gallagher Girls" by the same author are a new type of series for girls 13+. You have strong female characters trying to solve crimes or mysteries in the way kids do. Brilliant, genius level kids trained to steal or be spies. The action is fast paced and never stops - you're kids will LOVE these books.

Reviewed by tiinaj1tiinaj1
Written by a librarything.com customer.
Helpful?
Average Rating:(5.0)out of 5 stars

Katarina Bishop is not...

Katarina Bishop is not your average 15-year-old girl--growing up in a family of con artists and thieves made sure of that. But she isn't your common criminal either. Instead of stealing for herself, she steals back what was taken and returns it to the original owner. That is why, when approached by a woman and her grandson, she can't resist helping them--even when it means stealing the Cleopatra Emerald. Everyone believes the emerald is cursed which is why every attempt to steal it has failed. Even her great Uncle Eddie was unable to do it. But when Kat and her crew do the impossible and return the stone to who they believe is the rightful owner, they congratulate themselves on a job well done. What they realize a bit too late is that they themselves have been conned and now they have just two weeks to get the emerald back where it belongs. I enjoyed Heist Society, but Uncommon Criminals was so much better! I don't know how she does it, but Ally Carter has once again made a book about teenage con artists seem completely believable. I went into this thinking it was going to be a repeat of the first book with a few changed details here and there, but boy was I wrong. I love how much detail Carter puts into these books and the back story. There are so many twists and turns that there is no time for a dull moment. Every time I thought I had everything figured out, new details would be revealed--things I had never even thought of! Another thing I love about this series is the characters. They are all well developed and likable despite all of their flaws. Kat is, by no means, the perfect thief, but she is great at what she does. Her friends and cousin all look up to her and trust her completely. I think she is also a good friend, but has a difficult time showing it. And then we have, W. W. Hale the Fifth. Hale is smart, rich, and devilishly attractive. He also happens to be Kat's best friend. Despite growing up in a completely different world, he seems to fit in just fine with Kat and her thieving family. I love their banter and how Kat is always trying to figure out what the W's in his name stand for. I won't say much about it, but I'm glad their relationship is heading in a new direction. ;)

Reviewed by joanab951joanab951
Written by a librarything.com customer.
Helpful?
Average Rating:(4.0)out of 5 stars

In Uncommon Criminals, Kat has been on her own righting wrongs. Pretty soon, though she learns that she really needs her crew to rely on. As far as teen action/suspense novels go, this series is the best I've read in a long time. There were lots of unexpected twists and turns, and Kat learns a lot along the way. I love the Ocean's Eleven-y-ness of these books and I really like Kat and Hale's relationship! I definitely want to see where they go from here. I'm wondering when we're finally gonna learn Hale's first name. Wendell? Wayne? Worthington? Can't wait to find out.

Reviewed by AnnesanseAnnesanse
Written by a librarything.com customer.
Helpful?