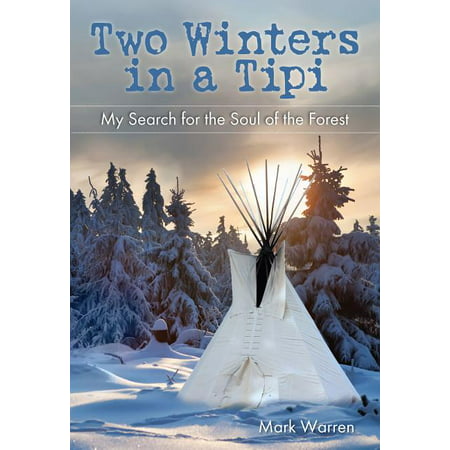 Two Winters in a Tipi : My Search for the Soul of the Forest

We aim to show you accurate product information. Manufacturers, suppliers and others provide what you see here, and we have not verified it.
The inspirational adventure of a man who went back to the land to show us how we can rediscover and reconnect with the wilderness around us. One stormy August night while he was away, a lightning bolt struck Mark Warren's tin-roofed farmhouse and burned everything to the ground. Even his metal tools melted. Friends loaned him a tent, but after just a month it began to break down--which Warren vowed not to do. He decided to follow a childhood dream and live in a tipi. Excitement stirred in his chest, and so began a two-year adventure of struggle, contemplation, and achievement that brought him even closer to the land that he called home. More than just the story of one man, TWO WINTERS IN A TIPI gives the history and use of the native structure, providing valuable advice, through Warren's trial and error, about the parade of confrontations that march toward a tipi dweller. It shows, without thumping the drum of environmental doom, how you can go back to the land--for two days or two years. The wild plants that Natives harvested for food and medicine still grow nearby. The foods still nourish; the medicines still heal. As Warren beautifully reveals, the wild places of the past still exist in our everyday lives, and living that wilderness is still a possibility. It's as close as the river running through your city, the woods in your neighborhood, or even the edges of your own backyard.

Mark Warren is a natur...

Mark Warren is a naturalist who taught outdoor skills, and so much more, to all ages.  He wanted to teach respect, appreciation and love for the outdoor world, animals and plants.  His work included elementary school programs as well as senior citizens and all ages in between.  Most of the book takes place in the forests of north Georgia in the U.S. After completing his undergraduate work, Warren was accepted into medical school.  He called the school and said he wouldn't be showing up because he had changed his mind.  However he still had some scientific training which he took to the woods with him and that is one of the things that made the story fun for me.  Warren told the usual tale of becoming one with the world and running with the deer, but then gave some of scientific explanation for it, which I always think is fun.  For example when he talked about trees communicating with each other he talked about some research in that area.  He said that it had been found that when a tree was ill or was experiencing an infestation of insects for examples, the trees surrounding it responded by going into a self-defense mode.  Can't remember the details and have NO biology knowledge, but the trees pulled something in their leaves back into itself, the harder part of itself, making the tree less vulnerable.  So Warren gives some explanation for what used to be considered old wives tales or new age gobbledygook and I always love it when I come across that kind of info. When Warren's rental home in the woods burnt down, he decided to try living in a tipi and did so for two years.  There is a lot of detail about building tipis and how they function that I found a little tiresome, and yet I had wondered about some of those things.  Smoke, for example, problems with rain and other things were explained and was interesting. There is also information about the Cherokee and their relationship with the world and with the government.  I  spent yesterday afternoon in the Anasazi Center in Cortez, CO and just left feeling so sad.  It is a wonderful BLM museum, but I was just so struck by one particular photo that was described as being taken during the American Occupation.  Something about that terminology and the reality of it struck deeper.  The only place that made me more sad than that was Little Big Horn. You can see there is a lot of variety in this book and it is a quick and interesting read.