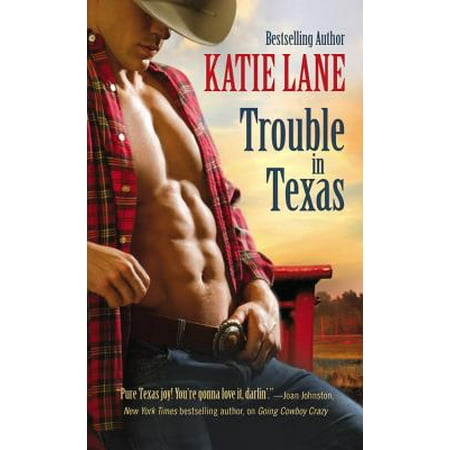 We aim to show you accurate product information. Manufacturers, suppliers and others provide what you see here, and we have not verified it.
Lane's bestselling Deep in the Heart of Texas series continues with the fourth trouble-filled, smokin'-hot adventure. Original. THERE'S A FOX IN THE HENHOUSE
Inheriting the most notorious house of ill repute in Texas can spell trouble for a girl's reputation . . . especially when she's Elizabeth Murphy, Bramble's prim and proper librarian. Yet when she discovers a buck-naked cowboy handcuffed to a four-poster bed, she forgets all about the town gossips. Elizabeth has sworn off men, but the stranger's kisses melt her resolve faster than ice cream on a hot summer day.
Waking up in Miss Hattie's Henhouse isn't how Brant Cates reckoned on getting to the bottom of his great-granddaddy's murder. The plan was to solve the centuries-old crime, then get the heck out of Dodge. But after meeting Elizabeth and discovering that the buttoned-up beauty is a sexy siren in disguise, he just can't pull himself away.
Now Brant needs Elizabeth to finally put his past to rest, but is she willing to risk her future on Bramble's newest bad boy?

ABOUT THE BOOK: Inher...

ABOUT THE BOOK: Inheriting the most notorious house of ill repute in Texas can spell trouble for a girl's reputation . . . especially when she's Elizabeth Murphy, Bramble's prim and proper librarian. Yet when she discovers a buck-naked cowboy handcuffed to a four-poster bed, she forgets all about the town gossips. Elizabeth has sworn off men, but the stranger's kisses melt her resolve faster than ice cream on a hot summer day. Waking up in Miss Hattie's Henhouse isn't how Brant Cates reckoned on getting to the bottom of his great-granddaddy's murder. The plan was to solve the centuries-old crime, then get the heck out of Dodge. But after meeting Elizabeth and discovering that the buttoned-up beauty is a sexy siren in disguise, he just can't pull himself away. Now Brant needs Elizabeth to finally put his past to rest, but is she willing to risk her future on Bramble's newest bad boy? REVIEW: Oh...my...God, this was a fantastic read! I really enjoyed the suspense kept throughout this piece and thoroughly enjoyed the buildup in tension between the hero and heroine. Ms. Lane does a phenomenal job at building everything up. She doesn't give too much away and allows it to seep in before she moves on to another piece you are waiting for. The premises is entirely original and completely a welcomed addition to the romance genre. I definitely think this is a piece that you will want to snatch up as soon as it hits the market. Five out of five stars for a job well done!

Legend has it, William...

Legend has it, William Frances Cates, great-grandfather of Brant Cates, was shot and killed by Sheriff Murdock over a hundred years ago. The shooting was the result of a dispute relating to a dedication plaque for the town of Bramble. The legend goes on to state that the dispute was about money. William was commissioned to make a plaque for the town hall. The building of the town hall fell behind schedule, thus the plaque William presented had the date the town hall was supposed to be completed, not the date it was actually completed. Since the date was wrong, the town didn't want to pay. To make matters worse, William's body was never returned to his family. However, over the course of generations, William's death turned into the Cates' family curse, which included several deaths. Branston William Cates is now the oldest of the Cates children. He has it set in his mind that there is a curse on his family. The true oldest child, Buckley, died as a teenager, trying to outrun a train. Brant's wife Mandy and young son, B.J., were killed in a tornado. And his younger brother, Beau, who is probably in his twenties is a cancer survivor. We first heard of Brant, President of C-Corp, a large family owned oil and gas company, in book three of the series, Catch Me a Cowboy. In that book, C-Corp had just purchased Dalton Oil, one of the largest employers in Bramble, with the intention of closing it down and ruining the town, revenge for killing William Cates. Elizabeth Murphy is the prim and proper librarian of Bramble. She's a thirty-seven year old woman, who many consider to be an old-maid. She is strictly business and her clothes show it. Well, maybe not. Her clothes are probably what a seventy-year-old uptight school teacher would wear, if she wasn't into the latest styles and fashion. Picture hair pulled back into a SUPER tight bun, glasses, and Miss Hathaway from The Beverly Hillbillies. She lives alone with her cat, Atticus. Oh, I forgot to mention she's never been with a man before. This is probably the best book in the series. I don't know what it is about this book, but I love it. Brant and Elizabeth are two people you wouldn't dream of putting together, but they work. It probably has something to do with the "hens". The "hens" are a couple of women who use to live and work at Miss Hattie's Henhouse, just outside of Bramble. In case you haven't figured it out, the henhouse is a place where a lot of X-rated activity occurred. Or maybe not. Appearances and perceptions are not always as they appear. The henhouse isn't totally what you think it is. Brant isn't anything like the guy he appeared to be in Catch Me a Cowboy. Elizabeth isn't the quiet, let everyone push her around, not standing up for herself woman. In Trouble with Texas, Elizabeth is contacted by a lawyer and told her grandmother, a woman she has never met, has left her the henhouse. Miss Hattie's Henhouse was at one point in time a beautiful place. In fact, it still houses a library any booklover could only dream of being able to step into; and enough antiques to make the host of Antiques Roadshow salivate. But it's also rundown and in desperate need of repairs. Not only did Elizabeth inherit the house, but she also inherited the three women currently living there. Minnie, the head hen, Sunshine, and Baby don't want to leave and have some plans of their own. The story starts out with Brant driving to Bramble to attend the wedding of his brother Billy and Sharlene. On the way to the wedding, he decides to stop at Miss Hattie's and see if he can find out some information about his great-grandfather. Well, one thing leads to another, and Minnie shoots Brant and then the other hens drug him and handcuff him to a bed. This is only the start of the laughable moments for this book. I'm all about the journey writers take readers on to get to happy endings. Katie Lane did a wonderful job of taking us on the journey of Elizabeth and Brant towards their HEA. We're able to find out more about Elizabeth and her background. We're also able to get to the bottom of the Cates curse and find out what actually happened to William Frances Cates. Trouble in Texas is full of surprises and twists. I can't wait to find out what Ms. Lane has in store for us in book five, Flirting with Texas, featuring Beau Cates and Jenna Jay Scroggs. Source: NetGalley Reviewed for Read Your Writes Book Reviews

This book was a deligh...

This book was a delightful read that shows the characters land in one funny situation after another. All of the characters were likeable and the even the side characters were very colorful. The Hens were simply hilarious. Trouble in Texas is book four in the Deep in the Heart of Texas series, I haven't read any of the other books in this series and although it could be a standalone, I'd recommend reading the other books first. There are a lot of characters introduced in this book, and I think I'd have enjoyed it even more knowing who they were. Now don't let me sway you the wrong way with that, because I really did enjoy it. The book was funny and lighthearted, and also a really satisfying read. And I'm looking forward to reading the other books in the series as well. I think you'd like it if you're looking for a fun, light read, with a good Happily Ever After.***Review copy provided by NetGalley in exchange of an honest review***

Author Katie Lane has fast become one of my favorite authors to read. Her Deep in the Heart of Texas series is one of the best cowboy/ small town series out there and her latest book Trouble in Texas is just an enjoyable story to read. Elizabeth Murphy is the quintessential prim and proper small town librarian. She doesn't want the town to know of her family's sordid past - that is is related to women who used to work at the local 'hen house'. In fact she owns and is looking after the elderly hens that still call it home. Brant Cates has been seeking revenge for his grandfather's death. Now that his brothers won't let him accomplish that he heads into town to watch one of them get married. Before he gets there he makes a stop at Miss Hattie's, one of the places his deceased grandfather was said to have been. The next thing he knows he is naked and handcuffed to a bed! I have to say I love how well the plot moves with this old murder mystery and the romance between Brant and Elizabeth. It was nice to see Brant was mostly over his deseeded wife enough that she did not come in-between him and Elizabeth. I would recommend this book as well as the entire series to anyone who loves a good cowboy romance.