We aim to show you accurate product information. Manufacturers, suppliers and others provide what you see here, and we have not verified it.
The Tracfone Alcatel Raven‚Ñ¢ LTE¬Æ brings an easy-to-use smartphone experience with updated features. With the Android‚Ñ¢ 7.1.1 Nougat¬Æ OS and a compact design, the Alcatel Raven‚Ñ¢ LTE¬Æ will keep you connected at a price you can afford. GSM5.0 Display5MP main camera with LED flash2MP front cameraAndroid 7.1.1 NougatInternal Memory: 2GB RAM + 16GB ROM microSD‚Ñ¢ (up to 32GB)Talk Time: 12 hrsStandby: 10 days
Cannot return by mail
Due to federal restrictions, this item cannot be returned by mail. Before returning the item to your local Wal-Mart store, please be certain that all tanks are completely empty of any flammable liquids, if applicable. See our returns policy for more information. 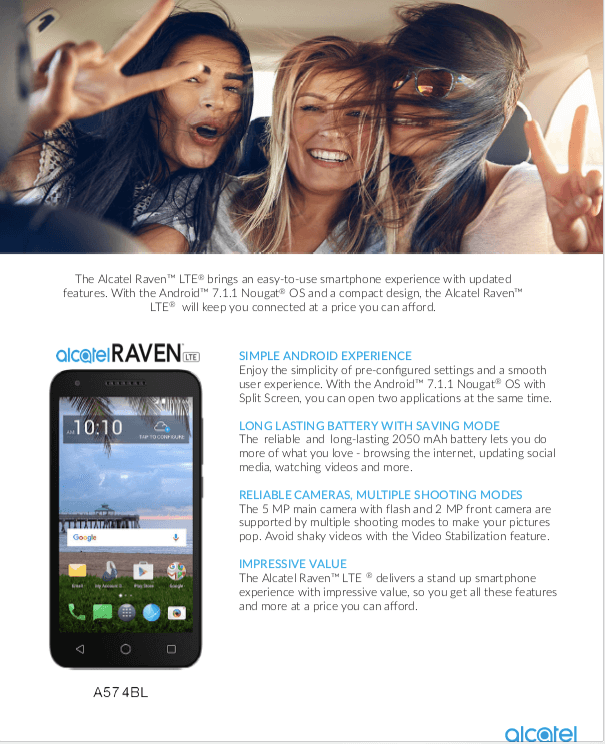 Honestly surprised by the performance of this phone. For $30 its decently fast, runs smoothly, and the display is decent. I've read a lot of negative reviews about this lil guy but for me it's a great backup phone for the low price. I don't use the device as a daily phone, I leave it on Airplane and use it as a mini home tablet and for when I want "Happy Time lol". My two cons are the display is low in pixels but bright and the battery does die fast but on Airplane mode I can get two days. All in all a great deal for the price and if you needed it as your daily driver it would do fine. My daily phone is a Galaxy S8+ its def nothing close to that...but worth every penny. Would definitely recommend.

So far this phone has been very easy to use. I had no problem transferring my minutes from my old phone to this one. I look forward to using the features on this phone, my old one did not have all the bells and whistles that this one has. Tracfone is the best!!!

I've had this phone for more than 3 years! I literally have drowned it 8 times, drop it out of my pocket 5-10 xs a day, my 6yr old kids have played with it numerous times, and the past year the screen has been cracked, but it continues to work! Absolutely amazing!! If you need a GOOD phone at a cheap price, this is definitely a steal!!! I am going to buy a new one, because I don't believe it'll be too long, it may stop working, but this is absolutely the one that I will purchase! I'd recommend for anyone!!

Bought this phone in a hurry because my old Tracfone phone broke. I bought a case and screen protector, then added 32g card. This phone has been a great replacement. I run OpenStreet maps with GPS tracking. The phone works like a charm. However, I did disable all the google apps and installed open source apps for most everything. That has kept the data use down to almost nothing.

The battery life is short if you use it heavily. I keep mine plugged in while driving.

While not the sleekest or the most attractive build ever found in a smartphone, being a simple blocky plastic thing with large face buttons, it definitely is a sturdy little device and worked great for what I needed it for, which was to not make me die internally if it broke (I work in a warehouse, breaking personal phones is not uncommon and people always end up absolutely devastated when it happens), yet still function as a decent smartphone for browsing and other phone activities. It gave me a good run for all the abuse it's taken and I'm finally letting it go due to its audio jack busting at last after about a little less than a year of use. Mind you, this thing went it's lifetime with only a tempered glass screen protector (which now has a bunch of tiny hairline cracks streaking across it, yet not the screen underneath), taking drops, spills, getting rolled over, tossed, lost, chipped, and only god knows what other atrocities. I will feel no regret as I move the sim card and SD to the new version.

I will say though that the biggest drawback was the lack of autofocus, but once again, I never expected iphone quality images.

It also started experiencing more response issues with the screen later on that had to be resolved with restarting, but that was always an easy fix and I'm more than sure that was due to all the hard falls it took finally taking their toll rather than the device itself. This little guy out performed a $300 tablet as far as processing apps, I couldn't be happier. While I would love to get another one, I think I could benefit from an upgrade to the newer alcatel model.

Written by a customer while visiting tracfone.com
30