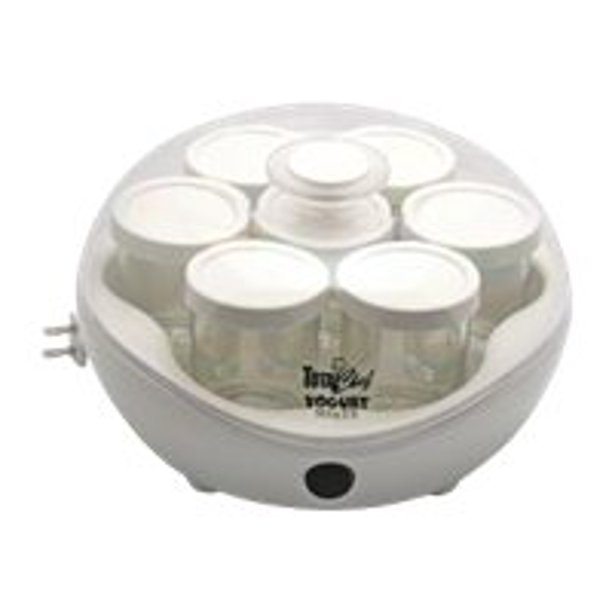 We aim to show you accurate product information. Manufacturers, suppliers and others provide what you see here, and we have not verified it.
Features

The Total Chef Yogurt Maker is the convenient and affordable way to make delicious, healthy yogurt at home. Save money and enjoy a natural treat without dyes, preservatives, or fillers. The flavor combinations are endless and accommodating dietary needs and requirements is simple.

The Total Chef Yogurt Maker lets you make up to seven different recipes at the same time in seven 6 oz. individual yogurt jars. Just follow the simple step-by-step recipe book and add your favorite ingredients. Homemade yogurt is a delicious and healthy treat. Try adding it to cakes, bread, desserts and dips. Enjoy homemade yogurt with your breakfast cereal or as a healthy snack during the day. The Total Chef Yogurt Maker will help you boost your health. By making homemade yogurt, you can control the fat and sugar content and eliminate additives, fillers and preservatives.

Not happy with a purchase? No problem. We've made returning items as easy as possible. And, most purchases can be returned for free. Learn more about our Returns Policy. Returns Policy. 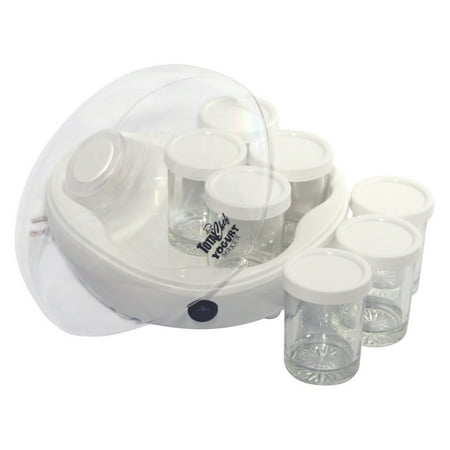 I had never made homemade yogurt before because I didn't want to risk it not turning out due to inconsistent or unreliable heat sources during fermentation. This little machine makes it EASY and pretty much foolproof, as far as I can tell. I've only made one batch, but it was a snap and turned out perfectly! Here's what I did: My goal was to make a very thick, Greek-style yogurt like Fage (which can cost up to $2 a cup!). First, I sterilized the jars in boiling water. Then I started with a quart of whole milk, and because I didn't have any powdered milk on hand, I whisked in two tablespoons of dried buttermilk powder, and also a teaspoon of sugar. I heated this mixture to 180 degrees and held it there for about ten minutes. Then I stuck the whole pan into the sink with cold water halfway up the side until the temp came down to 110 (or lower). I gently stirred in the starter (I used 5g of Yogourmet dried starter), filled the cups, put them in the machine, covered them with the lid, turned it on, and by morning (9 hours), it was perfectly thick and deliciously tangy and flavorful, though not TOO tart. Perfect for adding fresh fruit or a swirl of jam...or my favorite way, plain with homemade granola! YUM! Like other reviewers said, a timer with an automatic shut-off would be ideal, but what do you want for less than twenty bucks?? Contrary to other reviewers' complaints, I could see the "on" light just fine, there was no condensation from the lid, and I could get the lids on and off the jars just fine. All in all, I think this little gadget is terrific and a great value. And you will NEVER go back to storebought yogurt after using it! --Gina

Works great! Only problem is the lid does not fit nicely. Lid seemed to fit better before it was first warmed up, then after first use and onward, it does not seem to fit properly anymore. But, the quality of the yogurt that is produced from this yogurt maker is exceptional.

This is an awesome product and its priced right at walmart.com . I purchased and used it daily for 2 weeks now and it makes quality yogurt every time. All you have to add to the milk is a 2 tablespoon of purchased yogurt initially and then you can rollover every day. The durability is a little low as the top plastic cover is fragile and may get damaged if dropped on hard floor, so be careful. I use a pirex dish that fits well into the cover instead of the cups that came with it when I need to make plain yogurt otherwise I use the cups for flavored yogurt that my kids love to eat in breakfast.

I bought this for my dad as a gift. He has been making yogurt for years. He loves this yogurt maker. He says that it's easy to use, streamlined and makes great yogurt.

So easy, no fuss, no mess

After making yogurt with a soup pot and a heating pad, this was so much nicer. The yogurt is the same lovely consistency as store bought and all good quality of home made. I love the compact size and individual portions.

I bought this a month ago and it makes great thick yogurt. Only issue I have had is one of the 7 lids edge has split. Saving $ using this compared to the store bought greek yogurt.

excellent product. use it every week. need to have extra cups with it. plus needs a timer with a buzzer.also need to put it in all walmarts. think it would sell well.also would be nice if it had optional larger cups to buy that would fit in the machine.

I like this little machines. It makes great yogurt. I wish the jars were a little bigger, but over all, it's a good little machine. I would like to note that it's hard to tell if it is "on". So, if the button is "down", it's on. Just plug it in, press the button down and wait a few moments, feel the bottom, where you set the jars, it should be warm. One thing I do, I turn it on, with the top in place, so it can heat up while I'm preparing my recipe. I've made several batches and most set up nicely in 7 to 8 hours. I would recommend this machine to anyone that likes yogurt. I use my homemade yogurt to make "supercharged" oatmeal. Do a search for the recipe, it's really great for breakfast or a healthy snack!

Partner was very happy to receive this gift

The machine is lightweight and compact. Very easy to use too! Very happy with the decision to make my own yogurt it's so much heavier than store bought yogurt.

If you would like to share feedback with us about pricing, delivery or other customer service issues, please contact customer service directly.
1-3 of 42 questions
by coweyesAugust 24, 2010

1. No.
by prkw
2. Does not. Good luck with this unit.....it sweats bad and then shorts out the button below.
by Netshopper51
3. no you still need to by your favorite plain yogurt to start process.
by benybear
4. no
by jeepsee
5. NO. Bring 4 C of milk to 130degrees (not boil) Set off heat to cool until 110 degrees. (use meat or candy thermometer) whisk in 3 Tbsp of room temperature, plain yogurt. (non sweetened. if you are just beginning, Dannon plain yogurt will be fine to use as starter. Then you will have your own.) Pour into cups. Leave off individual lids. cover with machine lid. Turn on. Wait 10 hours. I put a large Coffee filter in a strainer over a bowl. I turn each small container of yogurt into the filter. I cover. Place in the refridgerator until chilled and drained. Pour liquid into your garden. Add fruit, nuts, honey, vanilla, granola or whatever you like to your yogurt.
by Hayden54
6. No. The instructions say to use 2 tablespoons of yogurt to start it and then use a little from your last batch to make the next. After 3 or 4 batches, they recommend starting with another 2 tablespoons from the grocery store yogurt.
by PlantStrongCook
7. No, no mix with the machine. You can purchase a good "plain" yogurt from the store and use that. it only requires 2 tablespoons to start it. Or you can purchase dry starters, but to me it's easier just buying the plain yogurt. Hope this helps :)
by PVvermont
7 Answers