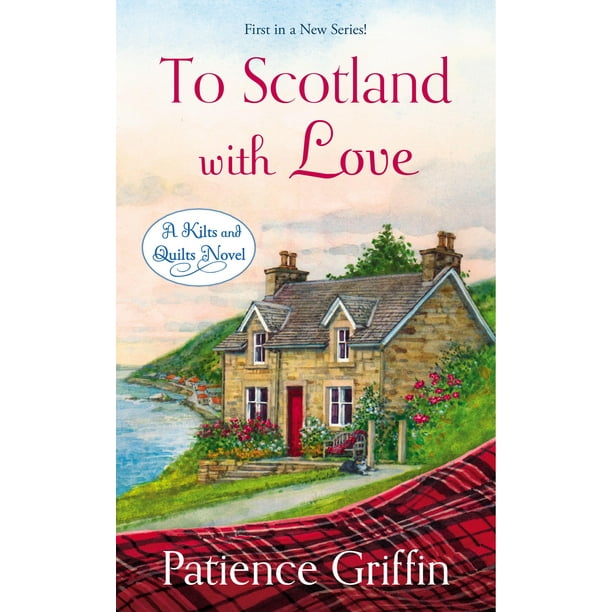 To Scotland with Love

Caitriona Macleod gave up her career as an investigative reporter for the role of perfect wife. But after her husband is found dead in his mistress’s bed, a devastated Cait leaves Chicago for the birthplace she hasn’t seen since she was a child. She’s hoping to heal and to reconnect with her gran. The last thing she expects to find in Gandiegow is the Sexiest Man Alive! She just may have stumbled on the ticket to reigniting her career—if her heart doesn’t get in the way.

Graham Buchanan is a movie star with many secrets. A Gandiegow native, he frequently hides out in his hometown between films. He also has a son he’ll do anything to protect. But Cait Macleod is too damn appealing—even if she is a journalist.

Quilting with her gran and the other women of the village brings Cait a peace she hasn’t known in years. But if she turns in the story about Graham, Gandiegow will never forgive her for betraying one of its own. Should she suffer the consequences to resurrect her career? Or listen to her battered and bruised heart and give love another chance?

Reviewed by whybehave2002whybehave2002
Written by a librarything.com customer.
Helpful?
Average Rating:(4.0)out of 5 stars

Good story about going home. The story opens with Cait's return to the small Scottish village where she was born and spent her childhood. She had given up her career as a reporter in an attempt to be the perfect wife to her cheating and emotionally abusive husband. Now that he's dead (in embarrassing circumstances) she's hoping to escape the scandal and mend her relationship with her grandmother. She doesn't expect to find Hollywood megastar and fellow escapee Graham Buchanan. Graham is a movie star who is extremely protective of his privacy. When he isn't filming, he comes home to Gandiegow to spend time with his son and little grandson. Duncan and Mattie are his world and he will do anything to protect them. Cait comes across as pretty selfish at the beginning. Though she claims she wants to reconnect with her grandmother, she has no intention of actually staying with her. Instead, she has bought her own cottage to live in. Her life receives one more blow when she discovers that said cottage burned two days before her arrival. She looks at it as just another indication that her life sucks. Then when she stumbles across Graham, her first thought is to use her time in Gandiegow to acquire the information to write an exposé on him and jump start a return to her former career. She doesn't give a thought to the effect it would have on him, his family, or the village and its residents. I liked Graham more, though he had his issues too. He is immediately suspicious of Cait and her intentions, which shows that he has good instincts. He obviously loves his son and grandson, though his relationship with Duncan is strained. Graham carries a great deal of guilt over the amount of time he spent away from Duncan due to his filming commitments and now seems to go a bit overboard in his attempts to make up for it. I loved his relationship with little Mattie who seems to be the lone bright spot in Graham's life. I enjoyed the development of the relationship between Cait and Graham, and the changes that they experienced along the way. In spite of his suspicions about her, Graham is attracted to Cait from the beginning. Cait was also attracted to him, which conflicted with her plans to out him. Both of them fought hard to resist it, having been hurt in the past and wanting to protect their hearts. Both of them are stubborn, passionate people, and there are moments of extreme sweetness between them as well as times of intense heat. The more time that she spent with Graham and the others, the harder it was for Cait to continue her plans for her tell-all. As a devastating crisis develops, I loved watching as the entire village pulls together to support those affected. Cait especially steps up to provide the emotional support that Graham needs, which only deepens their connection. But in spite of their growing feelings, both try to deny what everyone else can see - they are exactly what each other needs. It's not smooth sailing though, as Cait's plans come back to bite her and Graham has to decide whether he can trust her after all. Family is an important theme throughout the story also. Cait came to Gandiegow because of the memories of her life there and because Deydie is the only family she has left. She feels guilty because she allowed her husband to keep her away and isn't sure of her reception. Deydie is a tough nut to crack. She isn't very nice to Cait, with her snide comments and bossy nature, but there are occasional glimpses of her softer side. I felt that through most of the book, Deydie was just as intent on protecting her heart as Cait was. I loved seeing them come together at the end with a heartwarming and emotional scene. Graham also has his family issues to deal with. I ached for both him and Duncan as they butted heads. There were many times when I wanted to shake Duncan and tell him to let the past go. I loved the way that Cait read him the riot act and pointed out that he hadn't had it so bad after all. I adored little Mattie. I ached for what he had been through and what was still to come. It was sweet to see how he took to Cait and the bond that grew between them.