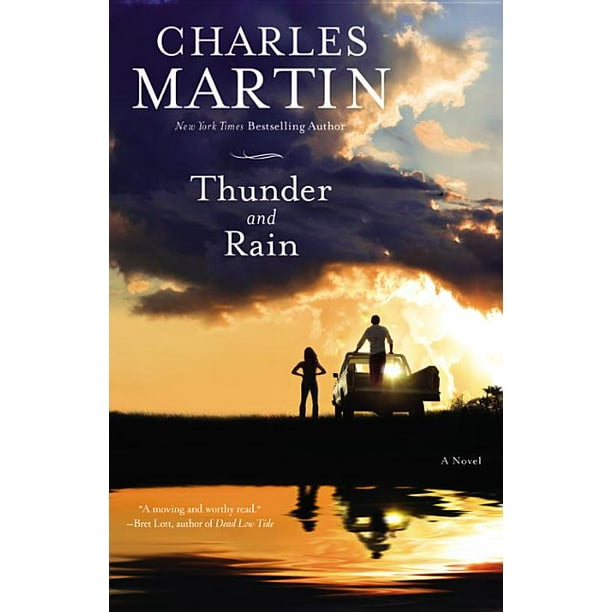 Thunder and Rain : A Novel


Third generation Texas Ranger Tyler Steele is the last of a dying breed--a modern day cowboy living in a world that doesn't quite understand his powerful sense of right and wrong and instinct to defend those who can't defend themselves. Despite his strong moral compass, Ty has trouble seeing his greatest weakness. His hard outer shell, the one essential to his work, made him incapable of forging the emotional connection his wife Andie so desperately needed.

Now retired, rasing their son Brodie on his own, and at risk of losing his ranch, Ty does not know how to rebuild from the rubble of his life. The answer comes in the form of Samantha and her daughter Hope, on the run from a seemingly inescapable situation. They are in danger, desperate, and alone. Though they are strangers, Ty knows he can help-- protecting the innocent is what he does best. As his relationship with Sam and Hope unfolds, Ty realizes he must confront his true weaknesses if he wants to become the man he needs to be.

I am a longtime fan of the Old West. My family watched all the great TV westerns together when I was growing up, and those times are among my most cherished memories. They're the stuff which helped to shape who I am as a person. My beloved Paw Paw was also a reader of western fiction, and Paw Paw was the male role model for my life-he still is to this day. With "Thunder and Rain", author Charles Martin brings together all the elements of classic westerns and blends them thrillingly together with the mores and moral conflicts of contemporary society. Tyler Steele, third in the family line to serve in the Texas Rangers, is now retired and raising cattle on his ranch. The pine knot-tough persona which enabled him to survive the unending danger of his profession also cost him his marriage to his troubled wife, Andie. Now struggling on his own to raise his young son, Brodie, Tyler encounters the last thing he needs-and the one thing he can't resist-a woman and child on the run from an abusive situation. Samantha and her daughter, Hope, are almost at the end of their limits when Tyler bumps his truck into their car, which is stranded in the middle of the highway. From then on, anything is possible, and most likely probable, as lives and hearts will cross lines and face challenges from old enemies and new threats. This story is an action-packed adventure, with knuckle-tight suspense, but it is also blessed with wonderful characterizations, with two remarkable young children to keep grounded the adults in their lives. Relationships are heartfelt and ever-evolving as more and more pieces of the pieces are revealed and connected. What will the final picture be? Who will survive, and how will their futures unfold? A highly-recommended read from talented storyteller Charles Martin. Book Copy Gratis Hachette Book Group

Reviewed by gincamgincam
Written by a librarything.com customer.
Helpful?
Average Rating:(5.0)out of 5 stars

"Unbelievable!! I just finished Thunder & Rain (could not put it down, as picked it up this weekend, and had to get up early on Sunday to finish it before going to church)....it was AMAZING! I have read all Charles Martin's books and each time, not sure how they can get better; however, each one is as good as the last in a unique way. Charles, you have a God-given talent and with your words speak to many - You fall in love with the characters, especially with Hope and her letters to God, Sam, Brodie, Dumps; however, my favorite is Cowboy! A little Clint Eastwood and John Wayne - I hope to see a movie based on this book and can see a sequel to continue the story of the next generation with Hope and Brodie's life. Thank you for your writing and bringing joy to your fans and readers. Now, I cannot wait for the next one!!!! Thunder & Rain is a must read for all ages - women or men! "

Reviewed by JudithDCollinsJudithDCollins
Written by a librarything.com customer.
Helpful?
Average Rating:(5.0)out of 5 stars

If you have ever wante...

If you have ever wanted to pick up and book and have it completely capture your attention until you find yourself turning pages faster and faster because the story is that intense you want to know how it will end, then pick up Charles Martin's latest novel, Thunder and Rain. This is the perfect summer read for those of you that love a contemporary suspenseful love story of a Texas Ranger and a single mother and her daughter looking to find a way to start a new life. The only problem is the ex-boyfriend/SWAT officer that will stop at nothing to find them. The conflict in this story is two-fold, with the first dealing with the pending divorce of Texas Ranger, Tyler Steele and his estranged wife Andie. Caught in the middle is Brodie, their only son, who only wishes for his family to work things out and be happy again. Yet Tyler hasn't been completely honest with the reasons why he can no longer be married to Andie and subsequently looks for a way to tell him that he is divorcing his mother. While trying to find answers of his own, he manages a cattle ranch with Brodie and an ex-con who goes by the name of Dumps. He takes care of Brodie and the ranch when Tyler is called out of town to work on a case. Tyler is now facing the same challenge his father before him had, which is finally realizing that his job has become the most important thing in his life while his family is slowly eroding away. When he attempts to find retirement as the answer, he runs literally into a single mother, Sam and her ten-year-old daughter Hope in the fog on a highway one night. Seeing her in dire straights with a run-down car that is on it's last leg, Tyler tries to help them get to safety at the local truck stop for gas and some food. Once they arrive, he finds out more than he ever wanted to know when Sam's abusive ex-boyfriend locates them and attempts to abduct them in his van. But Tyler being a Ranger knows that he can't turn his back when he knows he can help and that is protecting the innocent. Now he attempts to help them as much as he can and put a stop to why this man insists on hunting down Sam and Hope, but now, Tyler is his next intended target. Will Tyler's future end up just like his father's or will he be able to let go of his job and focus on what's really important, raising his son Brodie? I received Thunder and Rain compliments of Center Street, a division of Hachette Book Groups for my honest review and LOVED it. I was immediately drawn into the hero of the story and the details of Tyler's life and his past. The love his shares for his job and the responsibilities creates a likeable characteristic of what makes a true hero, one who will do whatever it takes to defend the innocent, no matter what the cost. There are memorable supporting characters you meet along the way that help balance Tyler's hard exterior and make you want to meet them in real life. For me, this book hooked me from the beginning and kept me up until I finished the final page. For those of you looking for a great crime mystery with a romantic twist, then you'll definitely want to pick this one up. The action is intense but with so much tenderness woven in between! In my opinion, this one is a 5 out of 5 stars and has found a permanent place on my personal library. Now I want to pick up more novels by this amazing author.

A story about a retire...

A story about a retired Texas Ranger whose sense of duty doesn't leave him. Another great Charles Martin read.

Reviewed by ebvebv
Written by a librarything.com customer.
Helpful?
Average Rating:(3.0)out of 5 stars

This was my third of Martin's books and my least favorite. It drags and the diary technique does not work. Read another one of his books.