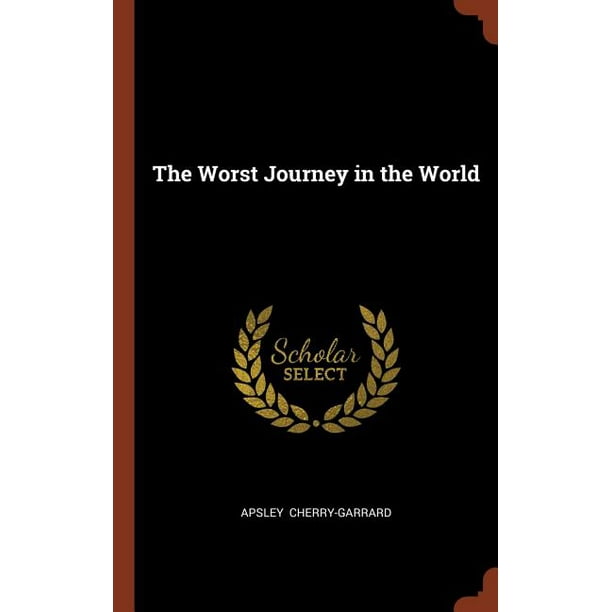 The Worst Journey in the World

This work has been selected by scholars as being culturally important and is part of the knowledge base of civilization as we know it.

This work is in the public domain in the United States of America, and possibly other nations. Within the United States, you may freely copy and distribute this work, as no entity (individual or corporate) has a copyright on the body of the work.

Scholars believe, and we concur, that this work is important enough to be preserved, reproduced, and made generally available to the public. To ensure a quality reading experience, this work has been proofread and republished using a format that seamlessly blends the original graphical elements with text in an easy-to-read typeface.

We appreciate your support of the preservation process, and thank you for being an important part of keeping this knowledge alive and relevant.

An incredible story to...

An incredible story told from a junior member of the team (Appsley Cherry-Garrad). The worst journey refers to a side trip taken to Cape Crozier by Wilson,Bowers,and Cherry-Garrard to observe and study the Emperor penguin. The expediton was organized as a scientific study, but was of course also a race to the South Pole against Amundsen. Scott's blunders and poor planning may be forgiven in light of the incredible amount of research undertaken by Wilson and others.

Paul Theroux calls this first person account of the ill-fated 1910-1913 Robert F. Scott expedition to the South Pole his "favorite travel book." I know what he means. My copy, a musty 2nd edition that I found in the bowels of the University library, is well over 500 pages long, and I think I read the darn book in three days. I simply could not put it down. It starts out "Polar exploration is at once the cleanest and most isolated way of having a bad time which has been devised." Theroux writes that the book is "about courage, misery, starvation, heroism, exploration, discovery, and fiendship." And it is about all that and so much more. What commitment these men had to science and to each other. As I get older I get more cynical about the world I am leaving to my children. This book restored my faith. And to think it happened less than 100 years ago is astounding. A personal connection to this book also added to its interest. Tom Crean, one of the members of this expedition, as well as Shackleton's legendary Endurance expedition a few years later, was a brother of my wife's great grandfather. This is the best book I have read in a long, long time!

I grew up listening to...

I grew up listening to heroic stories of Captain Scott and his brave men. This book covers the whole amazing expedition from start to finish and is a remarkable story of bravery and fortitude. Scott may not have been the first to reach the South Pole but his story in this book will live with me for ever.

Thank goodness that Cherry-Garrard was spared to relate this harrowing tale. Imagine it being so cold that it's hard to 'chip slivers off of butter'!? In places the language was so dated (or British) that I had to make out what was meant by the context. It must have been terribly disorienting to not be able to anchor yourself to seasons or 24 hour cycles of day and night. I found it very confusing to try and imagine where the heck they were - despite the supplied maps because South was essentially 'up'. I thought it very clever when they decided to ignore the construct of 24 hour days when it was continually dark twilight. Okay they were military, which I suppose helped but I found them admirably decisive on some unimaginably difficult issues. Some favorite passages; "Looking back I realized...that those Hut Point day would prove some of the happiest in my life. Just enough to eat and keep warm, no more -- no frills nor trimmings: there is many a worse and more elaborate life. The necessaries of civilization were luxuries to us: ...the luxuries of civilization satisfy only those wants which they themselves create." I can't help thinking that the men's buoyant mood is because they are thousands of miles away from the nearest woman. For sheer downright misery give me a hurricane, not too warm, the yard of a sailing ship, a wet sail and a bout of sea-sickness. Have you ever had a craving for sugar. Have you ever had a craving for sugar which never leaves you, even when asleep? Why can't men be like this at home; The best sledger is the man who sees what has to be done, and does it - and says nothing about it...There is nothing so irritating as the man who is always coming in and informing all and sundry that he has repaired his sledge, or built a wall, or filled the cooker, or mended his socks. Other things being equal, the men with the greatest store of nervous energy came best through this expedition. Having more imagination, they have a worse time than their more phlegmatic companions; but they get things done. And when the worst came to the worst, their strength of mind triumphed over their weakness of body. If you want a good polar traveler get a man without too much muscle, with good physical tone, and let his mind be on wires - of steel. And if you can't get both, sacrifice physique and bank on will. How much better has it been than lounging in too great comfort at home. Exploration is the physical expression of the Intellectual Passion. It's rather amazing how ignorant they were about scurvy and diet less than only 100 years ago. The passages on nutrition were fascinating to me.

Like most people, I have always "known" a bit about Scott's journey to the South Pole - how it was a race with Amundsen, how the Norwegians "won", how Scott did get there but didn't make it back, and above all how Captain Oates tried to sacrifice himself to save the others, famously quoted as saying "Well, I am just going outside, and I may be some time", then leaving the tent to walk to certain death in a heavy blizzard. What I hadn't fully appreciated was the wider context of the expedition - the meticulous advance planning, the fundraising, the gathering of the team and supplies, the advance journey to lay down rations for the final push, the considerations of how to spend the many months of "dead" time (in addition to work and scientific experiments, they had books, games and a pianola to divert themselves with), and the important jobs done by the teams who didn't go to the Pole with Scott, but stayed at the base camp, or formed the supporting parties for the first legs of the journey. Above all, I had never fully understood (or even thought about) just how cold it was, all the time. Cherry-Garrard makes all this real, and makes it fascinating. He was a member of the party that went in search of Scott and his team the year after they failed to return from the Pole (it had been obvious for a long time that they must be dead, as it was impossible to survive once their food and fuel ran out, even by killing penguins), but they had to wait for the next "summer" to be able to trace the route successfully. He writes movingly about finding Scott and two companions dead in their sleeping bags inside their tent (Oates had walked out, and the fifth team member had died and been buried earlier), reading Scott's final diary entries, and burying the bodies under a cairn. But the even more incredible part of this book is the description of a journey undertaken during the team's first winter in the Antarctic (that is, before the trip to the Pole) - Cherry-Garrard and two others set out to reach the Emperor Penguin breeding grounds (which a previous expedition had discovered) and to bring back some eggs, which hadn't been done before. This mid-winter journey was decidedly NOT a good idea, and it is this, not Scott's fated trip, that gives the book its name. It was so cold on this journey that breath and sweat instantly froze solid, coating the men with sheets of ice outside and inside their clothes. They had to chip their way through the ice blocking the tops of their sleeping bags each night, wherein they lay shivering for 6 or 7 hours, and when they got ready to start walking each day they had to be careful to emerge from the tent and immediately assume appropriate poses for dragging sleds (yes, they dragged them themselves), in case their clothes froze their bodies into the wrong positions before they got their harnesses on. Then they would drag heavy loads for hours, occasionally stopping to pull each other out of crevasses, stopping for tea and biscuits halfway, setting up the tent every night, cooking dinner, chipping into the sleeping bags, all without being able to take any clothes off or warm up at all. This went on for six weeks in, of course, complete darkness. But they found the penguins, got some eggs, and got back safely (hope that's not a spoiler). And every night, Cherry-Garrard wrote in his diary, as he lay shivering in his frozen sleeping bag. You couldn't make this stuff up. I cannot recommend this book too highly, even if "true life adventure" is not usually your cup of tea. Cherry-Garrard was a really good writer and observer, and the story is a truly exciting and inspiring, if tragic, one. Just be prepared to fee very cold while you are reading it.