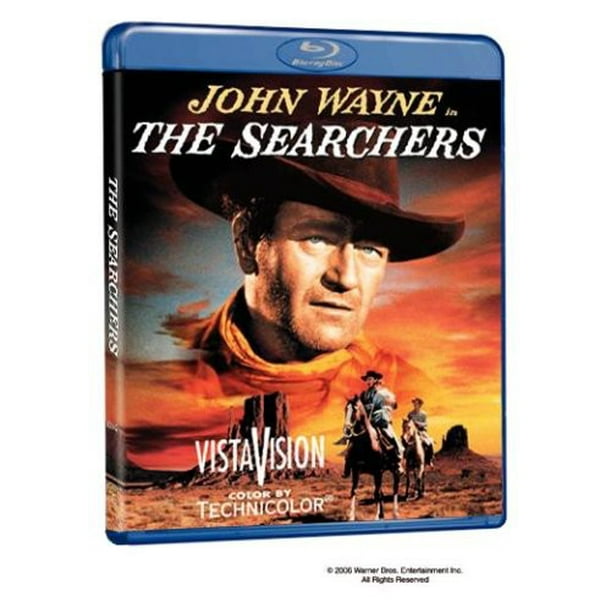 We aim to show you accurate product information. Manufacturers, suppliers and others provide what you see here, and we have not verified it.
John Wayne, Jeffrey Hunter. A tough Civil War vet hunts for his kidnapped niece in this legendary adventure. This digitally restored version features an introduction by John Wayne's son, Patrick, plus a 30-minute documentary and the original theatrical trailer! 1956/color/155 min/NR.The Searchers (Blu-ray)

This is a great movie. I have it on DVD, but after reading reviews on the re-mastered Blu-Ray, I decided to buy it. I could not be more pleased. The picture and sound are great, making this movie even better.

One of the greatest films ever made.

My favorite shot in the picture takes place just before the impending raid on the hostile Comanche camp, of which it's chief, so ominously named, Scar, is responsible for one kidnapping, at least three murders and multiple other acts of depravity toward women. The shot takes place just before the first light of dawn has arrived over the hills and consists of a tight-in close up of John Wayne's weary, wilderness beaten face. He looks just beyond the camera with those narrow, hawk-like eyes and gives a low signaling whistle to the small band of troops which lie in wait. Perhaps I so treasure this moment for the reason that there are simply not many close up shots in the film, only a handful. Most of the action is photographed in a more broad view so as not to so easily lead us on an emotional leash, but rather give us time to digest what is going on in any given scene and also to understand how the other characters are reacting, or not reacting. - The movie was released in 1956, so many of the more sinister aspects of the story are dealt with a bit more slight of hand than we are used to now. With movies like SAW I, II, & III, which are glad to show you the most horrific scenes of violence and cruelty that their depraved minds can think of. The Searchers decides to deal with these topics, but in a way that must be in some ways, a revelation to the viewer. To a child, The Searchers might easily appear to be a simple western story where two men decide to go out and rescue a girl from the Indians whom hold her captive. To an adult, one would find a complex story of how sometimes, just because you go out of your way to do a deed that is seemingly heroic, does not automatically make you the hero. John Wayne plays a complicated sort, a prototype for the 70's anti-hero model. He is a man who is suspected of criminal activity by the local law, a racist who hates Indians, but a man who also has knowledge and at times, a respect for their ways. The girl, his niece, that he "searches" for, for nearly six years, he wants to kill because he believes her to be "spoiled" by the Comanche "bucks", as he refers to them, in animal terms. And indeed when they finally meet near the end, she calls the Comanche "my people". - There is so much to write about in regard to this movie, so many layers of story and character to wade through. My best suggestion for you is, if you haven't already had the pleasure of watching one of the greatest movies of all time, than click on the "add to cart" button above, (because you're not going to get a better price for this Blu-Ray than what you see above.) and when it arrives, pop it into your player, sit back and get ready to experience a beautiful picture, beautiful sound and most importantly, an amazing motion picture that you will want to experience over and over again.

its great but it is a Christmas pritzen so we do not know it works yet,we'll have to get to

A Must Have Purchase!

Because the recently remastered dvd of The Searchers, had such great quality, I had reservations about whether buying the Blu-Ray version would be worthwhile. My curiosity finally got the better of me and I took the plunge. As good as the remastered DVD version was - this Blu-Ray version is MUCH better. My son and I have watched this movie hundreds of times, and we were both just dumbfounded at how we were noticing things we had never noticed before. It would be a worthy purchase at twice the price.

Everyone who has watched this on our blu ray was extremely impressed. The picture quality is the best of any movie we have seen. Saw details in the movie never seen before. Everyone commented that it was like watching the movie for the first time even though most in our home audience have already seen it at least a dozen time before they saw the blu ray version.