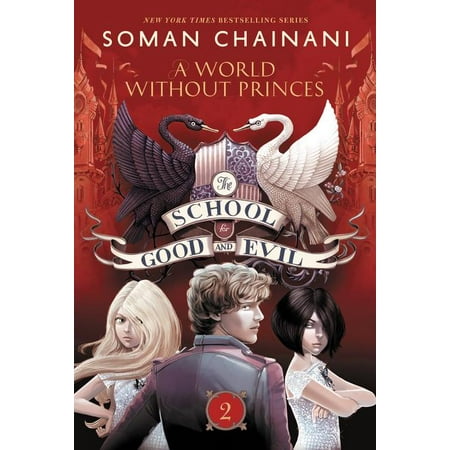 The School for Good and Evil #2: A World Without Princes (Paperback)

In the New York Times bestselling sequel to Soman Chainani's debut, The School for Good and Evil, Sophie and Agatha are back in Gavaldon, living out their Happily Ever After, but life isn't quite the fairy tale they expected. Now with a beautifully redesigned cover!

Witches and princesses reside at the School for Girls, where they've been inspired to live a life without princes, while Tedros and the boys are camping in Evil's old towers. A war is brewing between the schools, but can Agatha and Sophie restore the peace? Can Sophie stay good with Tedros on the hunt? And whose heart does Agatha's belong to--her best friend or her prince?

Soman Chainani has created a spectacular world that Newbery Medal-winning author Ann M. Martin calls "a fairy tale like no other, complete with romance, magic, humor, and a riddle that will keep you turning pages until the end."

In the New York Times bestselling sequel to Soman Chainani's debut, The School for Good and Evil, Sophie and Agatha are back in Gavaldon, living out their Happily Ever After, but life isn't quite the fairy tale they expected

I enjoyed the sequel t...

This was an interestin...

This was an interesting twist in Sophie and Agatha's fairytale. I didn't enjoy it as much as the first one but it was still a very fun read. I was not expecting the twist at the end, I'm now waiting impatiently for the 3rd book in the series. Thank you, Julie, from Pages and Pens for reviewing this series I wouldn't have found it if you hadn't talked about it on your channel.

Sophie and Agatha are ...

Sophie and Agatha are back at the School for Good and Evil, but the events when they last departed have divided the schools by gender: the School for Girls is run by the vaguely menacing Dean Sadar; Evers and Nevers are no longer enemies so long as they're the same gender; and the School for Boys is more or less anarchy personified. Once again, Agatha and Sophie are torn between their love for each other and pretty much every other aspect of their lives: boys, school, family, friends, etc. I'm still enjoying the series, but I do become quite reflective about what it says about gender roles and sexuality. In some ways it seems to be awkwardly heteronormative but then again, perhaps not? I'm curious to see if this series is going anywhere in particular. This book, much like the last one, has both a definitive ending and a slight cliffhanger. It's like, "yes, I know this chapter is over, and that's fine, but what happens next?" Which I suppose is what you want in a series, so long as the last book doesn't end that way.

Once upon a time, two girls kidnapped from the sleepy town of Gavaldon by the mysterious Schoolmaster. One was perfect and beautiful, thought to be destined for the School of Good, while the other was an oddball and an outcast from birth, sure to have been a shoo-in for the School of Evil. But pretty Sophie with her flawless features and dreams of princes and pink dresses ended up being dumped in Evil, while strange, frumpy Agatha landed in Good! Together, the two friends discovered the truth behind this apparent mix-up, and learned more about each other and themselves along the way. They worked to escape the clutches of the sinister Schoolmaster and made it back home to Gavaldon, but the adventure is far from over. As you can probably tell, there were a couple of really heartwarming messages in the first book of The School for Good and Evil series, as befitting a novel more suitably aimed at Middle Grade readers. "Beauty is only skin deep" and "Believe in yourself" are only a couple examples, woven into a unique and magical fairy-tale style story. This sequel, however, is a bit more complicated and a little more twisted. Once again, Sophie and Agatha find themselves back in the land of princesses and witches, princes and henchmen. But gone are the Schools for both Good and Evil, and in their places are the School for Girls and School for Boys. Some major changes have taken place since the two girls left; new alliances have formed while old bonds have broken, and now boys and girls are locked in a bitter war. The fate of the schools and this world rest on Agatha and Sophie and whether or not they can find their Happily Ever After. So A World Without Princes was a fun read, but I also can't deny that this sequel has lost some of the magic that made me fall in love with the first book. Story-wise, it was a little rough around the edges, with a plot that seemed to meander needlessly in several places. Friction and misunderstandings and between the two main characters feel forced, prolonging the conflict without adding anything new. Unlike its predecessor, this second book didn't read like it had a clear direction or a main theme it was drawing from, and the storytelling was very uneven with long stretches that felt monotonous in some places and plot developments that felt like they came out of nowhere in others. A World Without Princes is also much darker in tone compared to The School for Good and Evil. I'd hand the first book to a Middle Grader without a second thought, since it was at once ridiculous and full of heart, cute with just the right amount of wickedness to enchant readers of all ages. On the other hand, the second book would probably give me pause. The more mature themes and violence in this would likely not bother Adult and Young Adult readers, and it's certainly not a negative to me personally as I was reading this, but it's still enough that I'd hesitate to give this book to a 8 to 12-year-old, which I think is the age range most publishers are traditionally using for MG guidelines these days. There's mild torture, descriptions of images that involve a mother drowning her child, scenes of boys and girls talking about and relishing the idea of killing each other, just to name a few examples of things that that might be disturbing to younger readers. As they say, reader discretion is advised, in the end use your own judgment to decide. In spite of it all, I love the characters, I love the premise of these books, and I still enjoyed myself a lot. Agatha and Sophie are precious, and I just can't get enough of them, their shenanigans in this novel notwithstanding. There are still many moments of whimsy and humor that author Soman Chainani does so well, and plenty of scenes brought smiles to my face. Ultimately, I really want to find out what will happen to these two friends, and the repercussions from the climax and shocking conclusion to this book are sure to be significant. "Happily Ever After" hasn't come yet, and I'm definitely not going to give up on this series until "The End".

This second book perfectly followed along the tale of Agatha and Sophie. There seemed to be a love it or hate it reaction to this sequel, but I thought it was just fine. More than anything, it set up the third installment so well I can't wait for June!

About our prices
We're committed to providing low prices every day, on everything. So if you find a current lower price from an online retailer on an identical, in-stock product, tell us and we'll match it. See more details atOnline Price Match.
webapp branch
Mobile apps
Walmart Services
Get to Know Us
Walmart.com
Customer Service
In The Spotlight
Shop Our Brands
© 2020 Walmart. All Rights Reserved. To ensure we are able to help you as best we can, please include your reference number: FX9UUU4Y3N
Thank you for signing up!