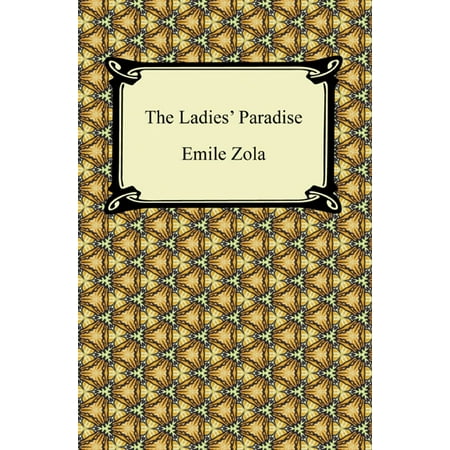 One of the most important, though controversial, French novelists of the late nineteenth century, and founder of the Realist movement, was Émile Zola (1840-1902). In 1871 Zola began to his most notable series of novels, the "Rougon-Macquart Novels," that relate the history of a fictional family under the Second Empire. As a strict naturalist, Zola was greatly concerned with science, especially the problems of evolution and heredity vs. environment. However, unlike Honoré de Balzac, whose works examined a wider scope of society, Zola focused on the evolution of one, single family. "The Ladies' Paradise" is the eleventh novel in this series, and begins exactly where "Pot-Bouille" left off. Octave Mouret has married and now owns a department store where twenty year old Denise Baudu, who has come to Paris with her brothers, takes a job as a saleswoman. The novel reflects symbolically on capitalism, the modern city, changes in consumer culture, the bourgeois family and sexual attitudes.

I randomly selected this from a shelf because it said "as seen on TV" don't know what it was on TV but it was a lovely read. Set in the beginnings of the department store it follows the time of a single girl who came to the city as her life in the country has gone south. What most surprised me was that this novel was originally published in 1883. the quality of the story that it has held up for over 100 years, this effect was assisted by the fact that I think this is a recent translation from the original French. this novel has depth and character as well as story. it is also not too complicated for an easy read. would recommend to most readers - even men

Written by a customer while visiting librarything.com
10
Average rating:5out of5stars, based onreviews

This was my first expe...

This was my first experience reading Zola and I loved every minute of it. I think what I really liked about this book was that, having worked in retail it was funny to see that not much has changed since the dawn of the department store in the late 1800's. Even back then office politics abound with the gossip as ruthless as ever. The employs constantly try to undermine their boss in hopes of taking his position while constantly complaining about the quality of customers they are getting. In addition, Zola also looks at how the new retail world meant the death-knell for the old trade system of small independent shops of Paris and the despair it brings to their owner. While Zola makes it clear that he is in favor of the new retail world he points out that not everyone would gain from it. Although the cast is filled with well-rounded characters, the real stars of the book are the goods themselves. Zola goes into painstaking detail about the different quality of cloth and silks as well as the numerous garments that were popular at the time. If there is anything lacking in the book I would say it's the love story between Octave Mouret, the owner of Au Bonheur des Dames and Denise Baudu, the leading lady and new arrival to Paris. Its not that its bad, just that I felt it was drawn out too long and really to a back seat to Zola exploring the world of the department store. Overall it was a great read and one I say you defiantly should read if you ever worked in retail as you can laugh along with the employees of Au Bonheur des Dames going through situations you have probably found yourself in.

This book can be appro...

Written by a customer while visiting librarything.com
90
Average rating:4out of5stars, based onreviews

A brilliant book about...

A brilliant book about the retail industry. It's about daring schemes to cut prices to the bone, and how that means pressure to increase turnover so that a smaller percentage of profit on many sales outweighs a larger profit on few. And it's about how it feels to work in retail, the necessary small insincerities, the infuriating situation of not being able to answer back no matter what, the office politics on the shop floor, the exhaustion and sore feet and meticulous tedium of keeping control of the stock, the mutual disdain between big store and independent shop. It's a negative take on the job, but recognisable. Oh, yes. There is a love story in there too. This grips me less, as the principals are exasperating. The heroine Denise is Cinderella, she's Patient Griselda, she's King Cophetua's beggar maid. She is abused and overwrought and made a drudge by family, by bosses, workmates, customers and passing strangers. Her angst is vast. She's fate's punchbag. The hero, if I must call him that, treats her appallingly too. All through the insults, the sacking (unmerited of course) the starvation, the reputation for whoring, the consumptive cousin, the explosive umbrella carver, the crisis scene when she has to fit a haute couture coat on the shoulders of her rival, Denise remains brave, noble, uncomplaining and with - her one identifying feature - great hair. Mouret - Henry VIII to her Anne Boleyn - is not much of a prize. He's a visionary businessman who rants and struts the Paris afternoon tea party scene. A less charismatic business partner functions to worry over the balance sheets. It takes Mouret a long time and chapters of pining to work out that offering Denise's own weight in gold will not get her in bed. She wants enough gold to go round the third finger of her left hand and that's it. The book is studded with set pieces; detailed verbal pictures of habedashery displays, the forming of an architectural facade, the dispersal across town of horsedrawn delivery vans. The foreword assures me these are much admired.

I actually enjoyed this but its length and pages and pages of descriptive language could easily turn people off - it nearly did for me but something drew me through it. I had never read Zola before and thought this would be a good way to do so. Follows country girl Denise as she comes to Paris to try her luck as a shopgirl and ends up in the growing department store the Ladies' Paradise. This edition seemed to be a good translation but of course I'm not familiar with the French. I didn't notice it being "translated" so I think that's a good sign. All the French names confused me at times. Some things in retail have never changed!