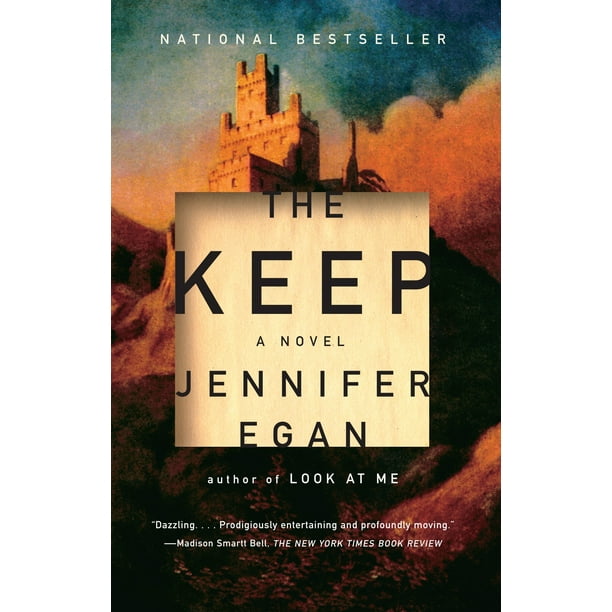 We aim to show you accurate product information. Manufacturers, suppliers and others provide what you see here, and we have not verified it.
From National Book Award finalist Egan comes a spellbinding work of literary suspense enacted in a chilling psychological landscape.Award-winning author Jennifer Egan brilliantly conjures a world from which escape is impossible and where the keep –the tower, the last stand –is both everything worth protecting and the very thing that must be surrendered in order to survive.

Two cousins, irreversibly damaged by a childhood prank, reunite twenty years later to renovate a medieval castle in Eastern Europe. In an environment of extreme paranoia, cut off from the outside world, the men reenact the signal event of their youth, with even more catastrophic results. And as the full horror of their predicament unfolds, a prisoner, in jail for an unnamed crime, recounts an unforgettable story that seamlessly brings the crimes of the past and present into piercing relation.

One of the most unusua...

One of the most unusual, riveting books I've ever read. It falls into the most-hallowed category - a book, which, as I realize I am getting close to the end, actually causes me sadness and feelings of "separation anxiety", and a book, which as soon I've finished, I simply wish to start again.

Danny visits his cousin, Howie, in Germany to help him with the castle he is renovating. Danny hasn't seen Howie in twenty years, not since he and another cousin left Howie to almost die in bad childhood prank. Now Howie is rich, married, and very successful. Punkster Danny has been living in NYC, bouncing from job to job and is now on the run from some mob guys. Ray is the guy writing this story for a creative writing class in prison. His story alternates between that of Danny and Howie's. The Keep is deliciously Gothic and creepy. But it is not your usual story and I almost didn't read it because reviews have been so mixed. I was given a push by a fellow tweeter and I am so glad I did. Danny is such a great character, paranoid that Howie wants payback for the horrific childhood prank, obsessed with being connected to the outside world, so much so that he brings his own satellite dish to the castle and unfortunately loses it, rendering his laptop and satellite phone useless. And did I mention the Baroness? She comes with the castle, refusing to leave the Keep which is the tower part of the castle, inaccessible if the walls are breached. Howie is a control freak millionaire, who wants to turn the castle into a type of spa that shuns the outside world. Then there is Mick, Howie's number two man, who resents Danny's presence. Egan is such a great write and I was so drawn into this story, moving between the castle and prison, not sure what is reality and what is fiction. This is another book I stayed up late reading to try and finish. I really recommend giving this book a try. It would have made my favorites of 2010 but there were so many great books to choose from. So it may not be on the list, but I loved it! my rating 5/5

I picked up Jennifer E...

My first thought: if you don't want a challenging read, don't pick up this book. It is not for mainstream reading; you seriously have to consider what it is that you have in front of you. And when you're finished, you'll STILL be thinking about it, and have a lot of questions. I originally picked up this book because of the cover blurb saying something about gothic horror, supernatural, ghosts, tragedy, etc etc...but it turns out to be something incredibly different. The author has provided us with a stunning work of metafiction here, with the constant themes including imprisonment, the relationship between knowledge & power, what is reality and what is not, and ultimately, the concept of escape. With each major character, however, the personal stories that reflect these themes change in respect to the individual, but work together to form a whole. I must say that the characters were well drawn and I got totally lost inside of this book once I started it, even though it was 100% not what I expected. The Keep would make a great book group novel because it would launch many avenues of discussion. I won't go into plot here because it's too intricate & I don't want to give away anything. Suffice it to say that I truly enjoyed it and I'm still thinking about it after having finished it last night. Recommended for readers of metafiction, for those who like being challenged as they read, and for those who want something way above the average.

This was a strange boo...

This was a strange book. Part near ghost story, part descent into paranoia, part prison novel. At the center is the story of cousins Danny and Howard. In their childhood, there was an incident that caused Howard to change. Howard has bought a castle somewhere in the Alps (even Howie isn't quite sure what country it is), but the baroness whose family lived in and owned the castle for generations will not allow anyone into the keep. Danny is brought in by Howie, a timely resuce as something or other happened in his last job that has him fleeing New York. Danny can't figure out why Howie would want him there and beings to get a bit paranoid after discovering twins who drowned in the castle years ago. As Danny starts to unravel, we learn of another narrative, this one told by a prison inmate. I did suspect how the two were connected. I was a little disappointed in certain things just being left hanging though.