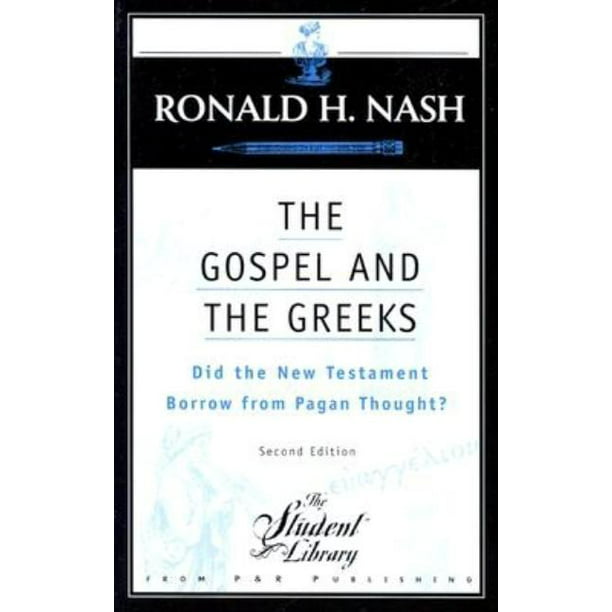 The Gospel and the Greeks : Did the New Testament Borrow from Pagan Thought?

We aim to show you accurate product information. Manufacturers, suppliers and others provide what you see here, and we have not verified it.
Did early Christianity borrow any of its essential beliefs and practices from pagan religions and philosophies? No, answers the author of this compelling apologetic for the uniqueness of Christian teaching. Part 1 investigates possible influences of Hellenistic philosophy; part 2, of pagan mystery religions; and part 3, of Gnosticism. First released in 1992, The Gospel and the Greeks has been retypeset.

Did the New Testament ...

Did the New Testament borrow from Pagan thought? Nash approaches the topic of outside influence in three parts, approaching the question of dependence from a traditional Christian viewpoint. Part I: Hellenistic Philosophy. How much Hellenistic influence do we see in the Gospels? From Paul's quoting of Stoic philosophers to John's interpretation of the Logos, there are unquestionable connections. The most fascinating passage in this section is Nash's "test case" in the book of Hebrews. There, Jesus is promoted as superior to the Alexandrian Logos and Sophia, superior to priestly mediators, superior to Moses and Melchizedek. Jesus is the true Logos, the fulfillment of it all. Where Hellenistic thinking often formed cyclical patterns, Hebrews portrays Jesus as breaking the pattern. The author of Hebrews perceives time not as cyclical, but as linear. "The once-for-all, fully completed, never-to-be-repeated, and final character of Jesus' sacrifice contrasts sharply with the continuing sacrifices of the Levitical priests." Part II: The mystery religions. Each region of the Mediterranean world seems to have produced its own mystery religion. How much influence did these religions have on Christianity? Nash sees it as a dead issue, in part because we know so little about the mystery religions before the third century. It was in this century that Christianity began to blend with mystery religions such as Mithraism, and the next century before the terminology of the mystery cults first began to appear in the language of the church. On the other hand, other cult practices such as that of Dionysus are too early to have an influence. Those who compare communion with pagan ritual are not taking timing into consideration: the savage practice of eating one's god appears to have long since disappeared before the time of Jesus. Part III: Gnosticism. The idea that any of the canonical books reflects Gnostic influence is losing favor. Renowned theologian Rudolf Bultmann believed the writer of the Gospel of John had been a member of a Gnostic sect who was converted to Christianity, but Nash examines various Gnostic writings and concludes that Gnostic thinking postdates the Biblical writings. Personally, I find it hard to believe that any Mediterranean religion grew up in a vacuum, yet a rash of recent books tend to sensationalize the commonalities between Christian and Pagan practices. Tom Harpur's The Pagan Christ provides one example. Nash's book provides some needed counter-balance. (Note: Nash's research is not a response to recent writings, but a precursor; I'm reviewing the 2003 second edition of a 1992 original.)