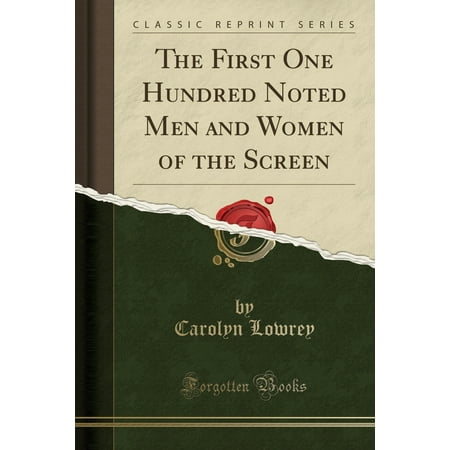 We aim to show you accurate product information. Manufacturers, suppliers and others provide what you see here, and we have not verified it.
Excerpt from The First One Hundred Noted Men and Women of the Screen Then Miss Allison made her entry into the moving picture field, her initial venture being with W. H. Crane in David Harum, a Famous Players Production, after which she was engaged by the American Mutual Productions Corporation to co-star with Harold Lockwood. The success of this combination was marked and a more popular team has seldom, if ever, appeared, in pictures. At the close of her first year's work on the screen, Miss Allison signed a contract to co-star with Harold Lockwood under the Metro banner. They did such plays as The River of Romance, Pidgin Island, The Come Back, Mister 44 and Big Tremaine. At the beginning of the following year, Miss Allison's marked ability found recognition and Metro engaged her as a star in her own right. Since then she has scored a series of successes in refreshing, wholesome comedy-dramas like The Win ning of Beatrice, In for Thirty Days and Peggy Does Her Darndest. This last production was pronounced by the critics one of the three best comedies of the year. The first of Miss Allison's Screen Classics, Inc., specials was a picturization of Avery Hopwood's hilarious farce, Fair and Warmer which proved to be not only a tremendous success, but one of the most delightful pictures ever filmed. This was followed by The walk-offs, the Oliver Morosco stage success by Frederick and Fanny Hatton. Her next picture, The Cheater, founded on Henry Arthur Jones' celebrated international stage success Judah, was a decided departure from anything she had done before. Her characterization in this marked her as an actress of unusual ability. She has just completed Are All Men Alike from a story by Arthur Stringer. An adaptation of Mrs. Humphrey Ward's well known book The Marriage of William Ashe, with Miss Allison in the stellar rfile, is now in the making. About the Publisher Forgotten Books publishes hundreds of thousands of rare and classic books. Find more at www.forgottenbooks.com This book is a reproduction of an important historical work. Forgotten Books uses state-of-the-art technology to digitally reconstruct the work, preserving the original format whilst repairing imperfections present in the aged copy. In rare cases, an imperfection in the original, such as a blemish or missing page, may be replicated in our edition. We do, however, repair the vast majority of imperfections successfully; any imperfections that remain are intentionally left to preserve the state of such historical works.