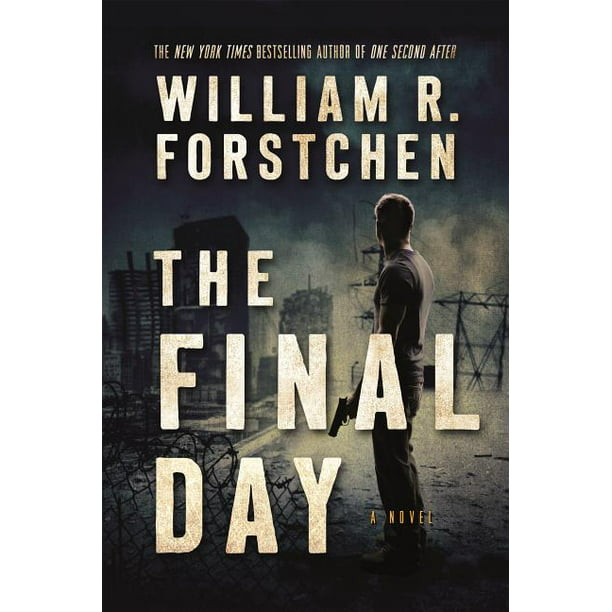 We aim to show you accurate product information. Manufacturers, suppliers and others provide what you see here, and we have not verified it.
A major release in the New York Times bestselling series, One Second After, set in an alternate America rebuilding after an electromagnetic pulse.

A major release in the New York Times bestselling One Second After series, set in an alternate America rebuilding after an electromagnetic pulse, this is William R. Forstchen's The Final Day.

Since the detonation of nuclear weapons above the United States more than two years ago, the small town of Black Mountain, North Carolina has suffered famine, civil war, and countless deaths. Now, after defeating a new, tyrannical federal government, John Matherson and his community intend to restore their world to what it was before the EMP apocalypse. For the most part, they are succeeding.

This period of relative stability doesn’t last long. A new, aggressive government announces that it’s taking over and ceding large portions of the country to China and Mexico. The Constitution is no longer in effect, and what’s left of the U.S. Army has been deployed to suppress rebellion in the remaining states. John fears he and his town will be targets.

General Bob Scales, John’s old commanding officer and closest friend from prewar days, is sent to bring John into line. Will John and his people accept the new, autocratic regime? Or will revolution rip the fledgling nation apart at the seams?

Months before publication, William R. Forstchen’s novel One Second After was cited on the floor of Congress as a book all Americans should read. This third book in the series immerses readers once more in the story of our nation’s struggle to rebuild itself after an electromagnetic pulse wipes out all electricity and plunges the country into darkness, starvation, and death.

More than two years have passed since the apocalyptic electromagnetic pulse that virtually destroyed the United States and left rag-tag pockets of the nation's citizens struggling for survival. The survivors are few; the dead, countless. After defeating a tyrannical would-be government, John Matherson and his community have struggled to rebuild their lives and their town; they've learned how to exist with next-to-nothing, without the accustomed conveniences of their former lives, lives the lives they lived in ignorant bliss before the dawn of that catastrophic Day. But their hard-won success is short-lived as a new government steps in, cedes much of the country to Mexico and China, and declares war against John and others like him who work to rebuild their communities. In an effort to be true to his own moral compass, John struggles to protect the people in the community while, at the same time, they take baby steps toward regaining some of the basic amenities they once enjoyed . . . and took for granted. Despite the reasonable-sounding request of his friend, General Robert Scales, John resists the orders of the new government; he does not intend to give up what little they have regained. But when he and Bob Scales discover the ugly truth, will it be too late to save their beloved nation? Readers of the first two volumes, "One Second After" and "One Year After," will find much to appreciate in this, the final chapter in the trilogy. With believable characters, a setting that takes on a life of its own, and a plot twist many may not see coming, there is much to recommend this riveting conclusion. There is a great deal of soul-searching and remembering of the past in the unfolding of this tale, something that readers may find slows the pace of the story. But the emotion-filled narrative serves to remind the reader of the tremendous loss and of the danger still hovering over the country, lurking everywhere, even as it pays tribute to the characters' ingenuity and perseverance and, in that context, makes the remembering appropriate. Recommended.

The Final Day concludes the William Forstchen trilogy that began with One Second After and continued in One Year After. The series illustrates the devastation that befalls the United States in the wake of a devastating EMP attack that knocks the country back to a pre-industrial level. It is told through the eyes of John Matherson, a former army Colonel and history professor in Black Mountain, North Carolina. This review may contain spoilers from the first two books. This is a series that is best read in order. Spoilers for One Second After and One Year After below As The Final Day begins, the people of Black Mountain are starting to climb back from the devastation wreaked by the initial EMP attacks and events that followed. Although much time is spent on simple survival such as growing crops, the first steps towards restoring civilization are well underway. Hydro-powered electricity has been restored and is slowly being spread to surrounding communities in what is loosely known as the "State of Carolina". When a nearly dead courier arrives with a message for John from someone claiming to be his former commanding officer and friend Bob Scales, John is both relieved and scared. The cryptic message, if true, could portend of another devastating event that could undo all the progress that had been made since the original attack. John must figure out if his old friend is still his friend, and if those claiming to be the government in Bluemont are legitimate or just another pretender with hidden agendas. Although there is quite a bit of action in this book, the story spends more time on thoughtful questions, both practical and philosophical. Basic questions of survival such as sanitation and medicine take on a whole new look without modern means of production. Avoiding starvation becomes a real concern without modern transportation and distribution systems. Communication has changed from near ubiquity to something more tenuous and requiring more planning. Matheson's "State of Carolina" and their near autonomy is a concern to those looking to restore a central government. The presence of Chinese and Mexican occupation of parts of the former United States is a further complication. Forstchen does a good job of creating sympathetic characters and a realistic, if folksy, depiction of Black Mountain. He also highlights the reliance on modern technology, and the importance of remembering the history of technology and the ability to function at a more primitive level. Matheson and Scales must both weigh their personal morals and how they fit into the new paradigm. Trust is an important theme in this book. They must decide if the government issuing orders is legitimate and what the moral course of action is. The Final Day is a dystopian story and there are plenty of personal losses along the way. Despite a couple of plot holes, this is an entertaining book and a satisfying conclusion to the trilogy. Anyone who enjoyed the earlier books will enjoy this one. Highly recommended. I was fortunate to receive an advance copy of this book.

Slow to start and full...

Slow to start and full of repetitions with a few unnecessary pointed political statements. Also enough with EMP... Overall not as good as the previous 2 books.