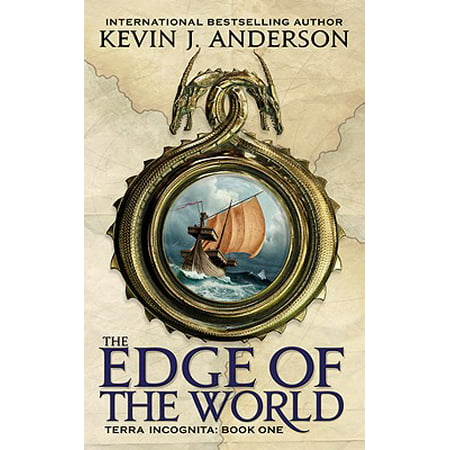 The Edge of the World - eBook

Terra Incognita - the blank spaces on the map, past the edge of the known world, marked only by the words "here be monsters."

Two nations at war, fighting for dominion over the world, pin their last hopes of ultimate victory on finding a land out of legend.

Each will send its ships to brave the untamed waters, wild storms, sea serpents, and darker dangers unseen by any man. It is a perilous undertaking, but there will always be the impetuous, the brave, and the mad, willing to leave their homes to explore the unknown.

Even unto the edge of the world...

The Edge of the World - eBook

Kevin J Anderson is we...

Kevin J Anderson is well known in SF circles for his "Saga of Seven Suns" SF series, and more visibly, for his extensions of the Dune universe written by Frank Herbert's son Brian. Here, in The Edge of the World, Kevin J Anderson tries something new--a fantasy novel. As it so happens this is the first novel of Anderson's I have read, and so I came into reading this novel unaware of first-hand knowledge of his writing styles and choices. The Edge of the World is billed as the first of the "Terra Incognita" series, and is set in a very low magic (lower than even, say, George R.R. Martin's Game of Thrones world) universe. The level of technology, aside from gunpowder, is pre-Renaissance, early Age of Exploration. And therein hangs the hook for his story. Two squabbling nations divided by different interpretations of a common origin myth find themselves, by bad luck and coincidence, drawn into a protracted religious-political conflict. In the meantime, both nations strive to explore the world beyond the continent that houses both Tierra and Uraba. There is a third, smaller, religious group that lives in both lands and tries to get along in the midst of the war. Although I am sure Anderson did not intend it, I got a Guy Gavriel Kay vibe from the parallels between his three factions and the Kindath, Asharites, and Jaddites. The book is divided into short chapters--over 110 in a 570 page volume. Plenty of POV characters in all three groups. Readers used to large casts and whiplash changes between POV characters will be familiar with the technique. Having weaned myself on Martin and Erikson, I didn't have a problem with the structure of the book. Too, many of the plot contrivances and coincidences seemed fine, if suitably tragic to continue to simmer and increase the conflict between the two nations. Characters show up and often die quickly, again, much like Martin and Erikson. However, I felt a couple of the twists and turns in the tale seemed like needless cruelty and not important to the overall plot. I didn't see their point and it was somewhat offputting. Also, while Anderson mostly does a good job to show that both sides in the religious-political conflict are capable of atrocity and evil, the finger does seem a bit on the scales to one side, at least to my perception. With those concerns aside, however, the Age of Exploration is an interesting time period in Earth's history, and Anderson captures it well in his fantasy universe. He's an accomplished writer, that comes across very well. And aside from some of the plot concerns, I was more than well satisfied with character development, growth and change. Anderson paints on a pretty big blank map (a metaphor used in the book) and I do want to see how the map fills in, especially given the discoveries made by characters from both nations in the novel. I am intrigued enough by the novel's strengths to want to continue to read the series, and perhaps eventually try his Saga of Seven Suns novels, too.

Written by a customer while visiting librarything.com
10
Average rating:3out of5stars, based onreviews

The premise here has a...

The premise here has a lot of promise, exploring vast uncharted territory, religious wars, and sea monsters, and on those counts it certainly delivers. If you're looking for a broad-scoped action and adventure novel this summer (or anytime, really) this is a fun read, but great literature it is not. Before I delve into that, however, I do want to point out where this book succeeded for me. Events of the book, including religious wars and a shared holy city with conflicting views about who should get the credit not only reference the Crusades, but the idea of a holy war really extends even to modern events. The story isn't told from one side or the other. We don't hear just from the Tierrans and about how they are morally superior; we see the events unfold from the Urabans' perspective as well. It illustrates how easily misunderstandings can escalate into terrible consequences and how neither side is entirely in the right or in the wrong. The scope of the story isn't something that many authors would feel comfortable with. Rather than focusing on one or two characters through the one battle to save them all, you have a large ensemble of characters and an entire world to look at. This can have its drawbacks, which I'll get into, but it was ambitious and I can certainly appreciate that. Also, who could say no to sea monsters? What I would have liked to see more of is character development. I don't care as much about world building beyond the basics needed for the story, and I don't need pages and pages of description of the terrain or how someone looks when the sun hits them from the west and they're turning counter clockwise. However, if the story is going to be told from different points of view, as this one is told from a different point of view every short chapter, I want to really get inside their heads. As a personal preference I would have preferred to spend more time with fewer characters. As it was, all of the characters seemed a little distant from me, so I couldn't really care much about any one of them. I can appreciate wanting to show an impartial view of events, but I think that works better for the History Channel than it does for a fantasy novel. Overall, griping aside, I was entertained. If you like action, exploration, and high seas adventure this will be a fun and quick read. I wanted more, and I can only hope that the next two books can deliver. I have to give this one a C, but I have high hopes for what will come next.