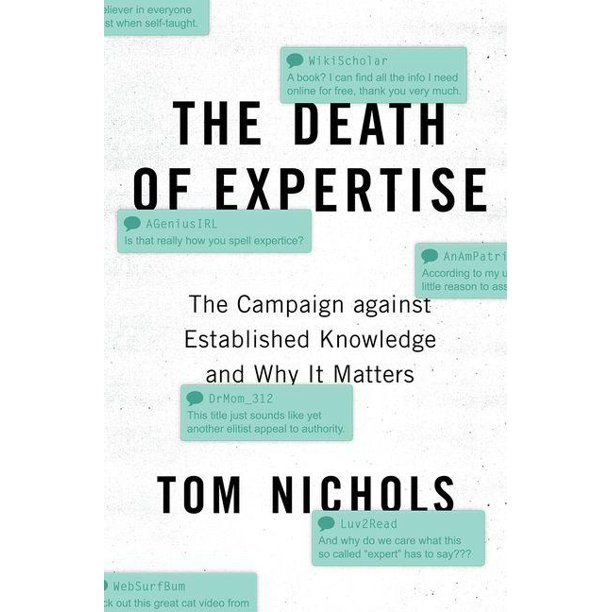 The Death of Expertise (Paperback)

We aim to show you accurate product information. Manufacturers, suppliers and others provide what you see here, and we have not verified it.
A cult of anti-expertise sentiment has coincided with anti-intellectualism, resulting in massively viral yet poorly informed debates ranging from the anti-vaccination movement to attacks on GMOs. As Tom Nichols shows in The Death of Expertise, there are a number of reasons why this has occurred-ranging from easy access to Internet search engines to a customer satisfaction model within higher education.Technology and increasing levels of education have exposed people to more information than ever before. These societal gains, however, have also helped fuel a surge in narcissistic and misguided intellectual egalitarianism that has crippled informed debates on any number of issues. Today, everyone knows everything: with only a quick trip through WebMD or Wikipedia, average citizens believe themselves to be on an equal intellectual footing with doctors and diplomats. All voices, even the most ridiculous, demand to be taken with equal seriousness, and any claim to the contrary is dismissed as undemocratic elitism. Tom Nichols' The Death of Expertise shows how this rejection of experts has occurred: the openness of the internet, the emergence of a customer satisfaction model in higher education, and the transformation of the news industry into a 24-hour entertainment machine, among other reasons. Paradoxically, the increasingly democratic dissemination of information, rather than producing an educated public, has instead created an army of ill-informed and angry citizens who denounce intellectual achievement. When ordinary citizens believe that no one knows more than anyone else, democratic institutions themselves are in danger of falling either to populism or to technocracy or, in the worst case, a combination of both. An update to the 2017breakout hit, the paperback edition of The Death of Expertise provides a new foreword to cover the alarming exacerbation of these trends in the aftermath of Donald Trump's election. Judging from events on the ground since it first published, The Death of Expertise issues a warning about the stability and survival of modern democracy in the Information Age that is even more important today.

Let me start by saying...

Let me start by saying "I'm never going to search online seeking health advice; I'll take a doctor's advice instead." We have to limit our internet usage and devote more time reading books written by experts because, by and large, it takes lot more authority to write a book than a blog. The book talks about the repercussions of layman's rejection of an expert's comment. This ignorance seems to have cost us quite a lot. The last couple of chapters help us turn things around, to some degree at least. I agree with some points the author talks about our education system - how it has become business and as such a student is a customer - always right. This has invariably led to students thinking that they're right just about everything - a scary thought obviously.

As Nichols would be qu...

As Nichols would be quick to point out, I was likely to enjoy this book about "the death of expertise" (more accurately, "the death of the acknowledgment of and respect for expertise") due to the fact that it fits with my existing beliefs. Tom Nichols' book, based on his astonishingly prescient 2014 article in "The Federalist," is a jeremiad on the loss of respect for the opinions of experts and for facts themselves. He discusses at length the issues of confirmation bias, anti-intellectualism, prioritization of feelings over facts at universities, the internet's creation of "instant experts," the explosion of talk radio and cable news and growth of splinter "news" sources such as Alex Jones's "Infowars" to satisfy Americans' appetite for fantasy masquerading as fact, etc. He decries the tendency for the poorly informed to insist that their opinions, on everything from American foreign policy to childhood vaccinations, are as equally deserving of respect as those of experts in the various fields, and harkens back to a simpler time when "ordinary" citizens knew their place and listened respectfully to the wisdom of the well-credentialed. As you might expect, this aspect is where his book can become rather grating. He is quick to admit that "experts" do sometimes err, and points out that citizens have a duty to inform themselves (as best their often feeble abilities will allow), but reminds readers that experts' opinions are far more likely to be correct than those of the less well-trained. And he's right, but that doesn't save his repeated complaints about the failure of ordinary folks to respect experts from becoming irritating. To a large extent I think this is a function of a short magazine article being stretched into a full-length book when what it would have been better served by expansion into a long magazine piece. Despite its repetitiveness, his criticisms of a culture in which the belligerently ignorant insist that their views be treated as just as valid as those of the well-informed who base their ideas on actual facts are indisputable and timely. Three and a half stars.

Id heard about this b...

I'd heard about this book on tv and, of course, the idea is pertinent to politics today especially in the US and the UK. It has some great quotes, but was quite a disappointment in that Nichols seems to denigrate everyone. He emphasizes that this is a republic meaning that we elect people who then make governmental decisions for us. And of course, he emphasizes the need to have expert information before making those decisions. Then it seems to me he says, while it is imperative that citizens stay informed from a variety of truthful resources, lay people shouldn't be expressing their opinions. Opinions should be expressed by experts who have advanced degrees in those specific topics, and their degrees should have come from "good," i.e. Ivy League universities. He decries the term "elitist" then he proceeds to be just that. Oh, and another thing he denigrates are the 24 hour news sites. He gives an example of news as entertainment citing the Clarence Thomas hearing that garnered an audience only because of its salacious content. He seems to have no faith that people, in general, can or will seek accurate information when it is available.

This expert gets no re...

This expert gets no respect. This is why. Tom Nichols is very upset with the level of discourse. Everyone knows his field better than he does, and everyone seems to be more expert in everything than the actual experts are. The internet is wealth of wrong. Schools don't teach learning - they have become customer service centers for their clients - the students. There is nowhere to hide from brute ignorance. And it continues to worsen. In his The Death Of Expertise, experts like Nichols can't have a decent conversation with anyone any more. He begins rationally enough pointing that Americans are unparalleled in their own universal expertise. "Each American appeals only to the individual effort of his own understanding, " Alexis de Tocqueville found. In 1835. More recently, the OECD has been testing students in nearly two dozen of the wealthiest countries. American students fare quite poorly, though they do come in first in one category: self-esteem. Nichols also cites the Dunning-Kruger Effect - the dumber you are the more confident you are to show you are not dumb. By chapter three - Education - the gloves really come off, as higher education has become a customer service function by teachers. Students choose universities for their facilities, not their specialties, and far too many kids who never should have entered at all, are there for 4-7 years. The administration will back the students over the faculty every time. It is also that degrees have suffered from inflation. A Masters is now the equivalent of a prewar high school graduation - the barest minimum to get ahead. Everyone in university is above average; most grades have an A in them. This is by far the best chapter, if only because it's where Nichols works and he knows it all so well. The next chapters get increasingly bizarre until they become annoying. Nichols goes too far, way too far. He slams Noam Chomsky because he is an expert in linguistics - his day job. He has no business writing (dozens of important) books on politics and history. His 70 years analyzing society apparently have amounted to his remaining a rank amateur, not worth reading, let alone debating. That is too much. It seems one is entitled to only one expertise, one that is certified and paid for by some third party employer. The elitism and the snobbishness of Tom Nichols are all too much. He refers to everyone else as the laypeople, and repeats endlessly his mantra that the laypeople need to listen to the experts and the elite - and not argue with them. And this despite a late chapter where he catalogues how experts are so often wrong. His 30 page conclusion is jampacked with laypeople forget and laypeople don't know and laypeople complain and laypeople have no idea. He bashes Donald Trump, of course, in terms that reveal the whole reason Trump was elected was because of Tom Nichols. I read another book like this 23 years ago, called In Defense of Elitism. Perhaps if Nichols had read it he might not have written this. But according to the Dunning-Kruger Effect, there was no hope of that. David Wineberg