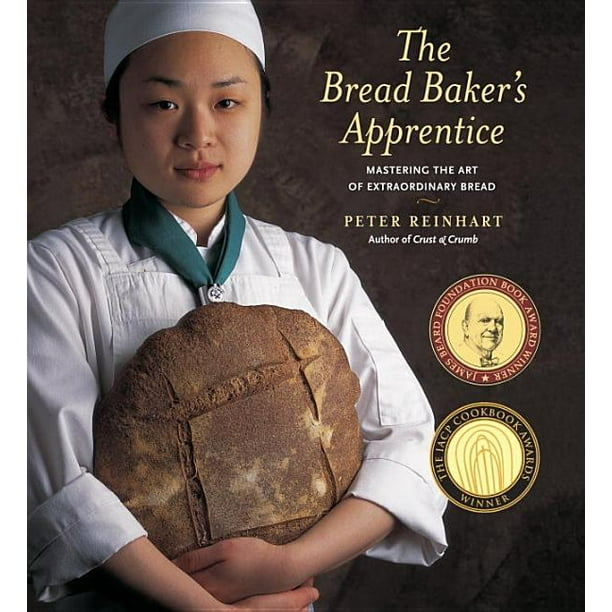 We aim to show you accurate product information. Manufacturers, suppliers and others provide what you see here, and we have not verified it.
Co-founder of the legendary Brother Juniper's Bakery, author of the landmark books Brother Juniper's Bread Book and Crust & Crumb, and distinguished instructor at the world's largest culinary academy, Peter Reinhart has been a leader in America's artisanal bread movement for over fifteen years. Never one to be content with yesterday's baking triumph, however, Peter continues to refine his recipes and techniques in his never-ending quest for extraordinary bread. In The Bread Baker's Apprentice, Peter shares his latest bread breakthroughs, arising from his study in several of France's famed boulangeries and the always-enlightening time spent in the culinary academy kitchen with his students. Peer over Peter's shoulder as he learns from Paris's most esteemed bakers, like Lionel Poilane and Phillippe Gosselin, whose pain a l'ancienne has revolutionized the art of baguette making. Then stand alongside his students in the kitchen as Peter teaches the classic twelve stages of building bread, his clear instructions accompanied by over 100 step-by-step photographs. You'll put newfound knowledge into practice with 50 new master formulas for such classic breads as rustic ciabatta, hearty pain de campagne, old-school New York bagels, and the book's Holy Grail-Peter's version of the famed pain a l'ancienne. En route, Peter distills hard science, advanced techniques, and food history into a remarkably accessible and engaging resource that is as rich and multitextured as
the loaves you'll turn out. This is original food writing at its most captivating, teaching at its most inspired and inspiring-and the rewards are some of the best breads under the sun. -- Food52, Most Anticipated Cookbooks
-- Every Day with Rachael Ray, Round-UpThe Bread Baker's Apprentice (Hardcover)

The Bread Baker's Apprentice - Mastering the Art of Extraordinary Bread - by Peter Reinhart and published by Ten Speed Press Berkeley is an impressive cook book. If you want to bake great bread and if you want to have great advice in this sense, go for it.With love, passion and experience, the book is celebrating with this edition the 15th anniversary.Peter Reinhart will explain you the art of baking. Best temperature, what kind of water to use, yeast and flour...All you want to discover regarding bread-world won't have any other secrets once finished to read this book.The longest section will be dedicated at the various diversified kind of breads from many countries and for all tastes and occasions!It will be simple to bake bread for everyone considering the accuracy of the instructions given by the author.A great book if you love bread and if you want to bake it at home.I thank Netgalley for this book.

Since I bought this bo...

Since I bought this book I have been baking the same loaf of bread almost every night for eight years. I can't remember what it's called, but it's the one where you throw together flour, yeast, salt & ice water then let it rise in your refrigerator overnight. I've expermented with other recipes here, but this particular bread recipe is perfect. I just take a bit out each night for the one loaf I'm going to bake, and the whole recipe lasts us about five days or so. I wish I had the skill & patience to tackle some of the more involved recipes here, but I found the one I need & will be forever grateful, as is my wife.

A great primer on brea...

A great primer on breads. This is the bread book I recommend for someone who wants to learn how to bake bread. The instructions are clear and easy to follow. Many images throughout the book. Interesting recipes, although many are a little rich/sweet to my taste. Recipes are given both in volume and imperial weights. Unfortunately, metric measurements are not given. The shaping instructions are adequate, but I have seen better. Overall a fantastic book for the beginner and advanced baker alike.