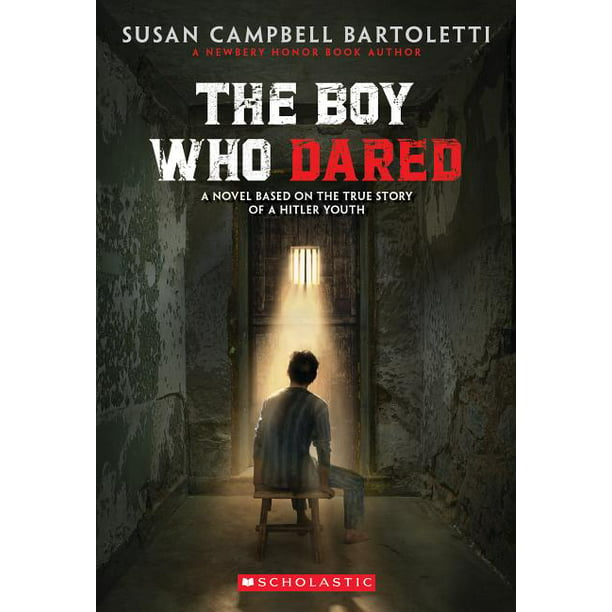 The Boy Who Dared (Paperback)

Susan Campbell Bartoletti has taken one episode from her Newbery Honor Book, Hitler Youth, and fleshed it out into a thought-provoking nonfiction novel. When 16-year-old Helmut Hubner listens to the BBC news on an illegal short-wave radio, he quickly discovers Germany is lying to the people. But when he tries to expose the truth with leaflets, he's tried for treason. Sentenced to death and waiting in a jail cell, Helmut's story emerges in a series of flashbacks that show his growth from a naive child caught up in the patriotism of the times, to a sensitive and mature young man who thinks for himself.• Author: Susan Campbell Bartoletti • ISBN:9780439680141 • Format:Paperback • Publication Date:2018-12-26

I love reading anything to do with World War II or the Holocaust. This book came as quite a surprise. This book was a fictionalized telling of the last day in Helmuth Hubener, age 17. Helmuth grew up in Germany as Hitler came to power. A strong Mormon in his beliefs he stood against the teaching of Hitler. He thought he would be working for the "Fatherland" if he told the truth. What he didn't know was that most people didn't want to know the truth. Susan Bartoletti has done extensive research to track down as many facts as she can to tell the story that Helmuth didn't live to tell. Although it is a fictionalized account, as she says, no one can know his last few hours, we can imagine based on other testimonies of those who did survive that this is pretty accurate. I believe this should be a part of all history lessons. We never want to forget the atrocities against the Jews, and anyone else Hitler decided he hated. However, few know of the atrocities against Germans loyal to their country who did not agree with Hitler. This is not a book you can sit and read just a bit and then leave. You must sit and read until you have finished this book. It is that powerful.

Reviewed by skstiles612skstiles612
Written by a librarything.com customer.
Helpful?
Average Rating:(5.0)out of 5 stars

A stirring account of the story of Helmuth Hubener, who was executed by the Nazis at the young age of 17 for listening to the BBC and writing pamphlets about what he heard. Helmuth went against all he was taught and made a bold step which cost him his life.

Reviewed by ShouldIReadItShouldIReadIt
Written by a librarything.com customer.
Helpful?
Average Rating:(5.0)out of 5 stars

This book is based on the true story of Helmuth Hubener. Helmuth is a boy who is growing up as Hitler and the Nazis are rising to power in Germany. Helmuth is very bright and realizes quickly that he must always play the part of the good German boy following the "Fuhrer's" rules, when in fact he is a young activist who feels that he and everyone else in Germany deserve to know the truth. He distributes pamphlets telling this truth with the help of his two friends until he is caught. Helmuth was tortured, and although he gave up the name of his friends who helped them, he also saved their lives by sacrificing his own. While some of the content in the book was fictionalized, Helmuth was a real person, real-life hero.

Reviewed by MelindaBolandMelindaBoland
Written by a librarything.com customer.
Helpful?
Average Rating:(5.0)out of 5 stars

Used in conjunction with "Hitler Youth: Growing Up in Hitler's Shadow," this book would be a wonderful tool for teaching the Holocaust and World War II. Although I only perused the novel, I could quickly tell that it is gripping and could be used as an anchor text for a unit. The story can be used to address Common Core standards involving comparing and contrasting various fiction and nonfiction.

Reviewed by JonathanToupsJonathanToups
Written by a librarything.com customer.
Helpful?
Average Rating:(4.0)out of 5 stars

Helmuth is a schoolboy...

Helmuth is a schoolboy in Germany when the Nazis take power in Germany, and he quickly gets swept up in the crisp uniforms and patriotism of the Hitler Youth. But as the war progresses, he begins to see how much freedom is being taken from the German people. Helmuth must decide how loudly he can speak out against the war, when the quietest whisper will be treason. Based on the true story of war protester Helmuth Hübener, this book succeeds in making the Holocaust even more personal. More and more recently we are seeing Holocaust stories told from outside the Jewish experience, which (I think) is excellent--it's important to know that the the Holocaust affected more than just the Jews and the Gypsies. It's also important to educate people that not all Germans blindly followed, that there were still objectors, and even among those who weren't actively protesting, not all Germans agreed with what was going on.Helmuth's story here is based on the research Bartoletti did for her Newbery Honor book Hitler Youth, then fleshed out through interviews with Helmuth's friends and brother. The result is a fully-realized character and a narrative that reads smoothly, without the stilted, lumbering prose that can afflict biographies. The writing is a little stiff at times, but overall, this is high on my list of recommendations when the 8th-grade Holocaust book report rolls around.