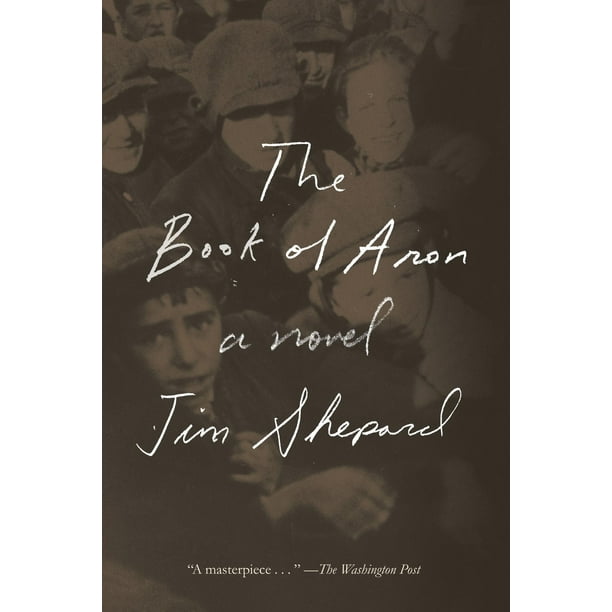 The Book of Aron - eBook

The acclaimed National Book Award finalist—“one of the United States’ finest writers,” according to Joshua Ferris, “full of wit, humanity, and fearless curiosity”—now gives us a novel that will join the short list of classics about children caught up in the Holocaust.

Aron, the narrator, is an engaging if peculiar and unhappy young boy whose family is driven by the German onslaught from the Polish countryside into Warsaw and slowly battered by deprivation, disease, and persecution. He and a handful of boys and girls risk their lives by scuttling around the ghetto to smuggle and trade contraband through the quarantine walls in hopes of keeping their fathers, mothers, brothers, and sisters alive, hunted all the while by blackmailers and by Jewish, Polish, and German police, not to mention the Gestapo.

When his family is finally stripped away from him, Aron is rescued by Janusz Korczak, a doctor renowned throughout prewar Europe as an advocate of children’s rights who, once the Nazis swept in, was put in charge of the Warsaw orphanage. Treblinka awaits them all, but does Aron manage to escape—as his mentor suspected he could—to spread word about the atrocities?
Jim Shepard has masterfully made this child’s-eye view of the darkest history mesmerizing, sometimes comic despite all odds, truly heartbreaking, and even inspiring. Anyone who hears Aron’s voice will remember it forever.

The Book of Aron - eBook

The only books I know...

The only books I know to compare this with are the [Diary of Anne Frank], [The Painted Bird], [Wartime Lies] and [Huckleberry Finn] because they were written through the eyes of a child. The great difference is that the author created a fictional Warsaw Ghetto, not an environment he ever lived in or saw. I think this is a truly great book and will become a classic for adults and children. The hero, Aron, small for age 9, always had been picked on. He became a successful thief and smuggler who provided food for his diminishing family in a gang of three boys and two girls. One of the three boys, Boris, was part of an uncongenial family moved into the apartment of kitchen bedroom and hall.This family got the kitchen, Aron's parents the bedroom, and Aron and his brothers the hall. In the cold of the Polish winter, there was precious little coal, wood or oil for heating or cooking. The gang was sometimes caught smuggling, but often managed to escape. Aron was befriended by a German soldier who wanted him to steal and smuggle a bootjack for his precious new boots. This soldier was introduced to Aron by a member of the Jewish police. This 'friend' was able to discover the whereabouts of friends and family members who were taken away by the police for 'work details' which sometimes were work and other times were massacres or transports. Shepard includes a famous real life hero, 'One of the Righteous', Janusz Korczak, who was a child advocate, a doctor, and the director of an orphanage. He took in the boy after his parents were killed. Korczak appeared in the film [Schindler's List] leading his orphans, singing, into the transport (to the concentration camp). I had never read any books by Shepard before, and did not even know his name. I now put this book alongside the work of [Primo Levi], and [Elie Weisel] which are eyewitness accounts and not fiction. To have created a very believable young hero, learning how to survive better than his parents or older brothers, is profoundly moving. This was not a good kid, or a brilliant kid, or a natural leader, or handsome, or known as a fighter. This was a mama's boy who hugged her, and occasionally crawled into her bed and discovered in the morning that he had wet her bed. This same boy left the ghetto with his gang on a daily basis to barter, buy food or steal and returned with goods to sell or eat. He turned out to be the survivor of his family and its mainstay until the Nazis finally took them all, the orphans and Korszak to their deaths. Following Aron through his daily adventures makes the horror seem normal - just everyday life. It makes a horrible unimaginable tragedy fun to read. I don't know if that is ethically a good thing, but I can't recommend this book highly enough. If there were 6 stars I would give it all 6.

The Book of Aron by Jim Shepard is a unique, heart-breaking, and powerful look at World War II through the eyes of ten-year-old Aron who tells his story of how his family was relocated from their countryside home and walled up in the Warsaw Ghetto. It is through Aron the reader learns about daily life in the Ghetto as well as what happens to Aron's family and the families living inside the Ghetto with him. Through Aron the readers are able to witness his transformation as it is occurring. Inside the Ghetto Aron is introduced to Janusz Korczak, a Polish-Jewish doctor who was "runs" the orphanage, prior to the war Korczak was well known for his advocacy for children's rights and now hopes to help as many as he can and spread the word of the atrocities that are occurring daily. In addition to The Book of Aron being an exceptionally detailed and thoroughly researched work of literary historical fiction, Shepard sets his book a part from many of the other excellent works during this time period by having Aron be the sole narrator and in so doing, has masterfully crafted a book as one might expect from an ten year old living a life unimaginable to most. I cannot possibly due justice to this masterpiece other than to highly recommend The Book of Aron to all readers and book discussion groups.

The interplay between environment and childhood development is a principal theme of this novel. Jim Shepard elects to tell his story of the Warsaw ghetto using a nine-year-old narrator-Aron. This makes for an interesting and unique perspective on events that have been well documented over the years. Although he succeeds admirably, the resulting narrative does not carry the weight of introspection and insight that an adult might depict or an adult reader might expect. Aron views events with the eyes of a poorly educated youth from a disadvantaged background. Shepard appropriately gives him little ability to interpret what he is seeing. He does not question the increasing threats of barbaric treatment of the Jews by the Nazis and their Jewish enforcers. Instead Aron learns to cope by joining a group of other children who provide for themselves and their families through theft and smuggling through the ghetto walls. This group seems to view their condition as a game, which they are particularly good at. Deaths from typhus, summary executions, lice infestations and even collaboration with the Germans go unquestioned and all seem to be just the downside of playing the game. Shepard's depiction of the youth culture in the ghetto has a ring of truth to it, but it seems to diminish the horror. Shepard's introduction of Janusz Korczak's, an actual hero of the ghetto who ran an orphanage and had a children's radio program where he played "The Old Doctor", to Aron's world begins to humanize him. Aron accompanies the Old Doctor on his rounds and learns of the importance of caring in this bleak environment. By the novel's end, Aron begins an evolution into a more caring and understanding person, but it was too late as the Germans were already well on the way to their "final solution."

The Holocaust seen from a child's perspective. Aron is the son of a Polish Jewish family that is forced into the ghetto. As a child, Aron has no context through which to understand what exactly is happening when the Germans begin issuing their edicts, and he and his friends begin simply by judging what possibilities are available to them in the new circumstances and taking what advantage they can of them. They quickly become smugglers, finding ways out of the ghetto to secure goods to sneak in. Ill-advisedly (after all, what did Aron know), he also makes a pact with a Jewish policeman puppeted by the Germans.But as the Nazis continue to put more and more of a squeeze on the ghetto, Aron's possibilities become narrowed too. He loses his friends; he loses his family. He is taken in to an orphaned by the kind doctor who runs the place. But as in all Holocaust stories, this one comes to its inevitable conclusion. Grimness upon grimness. Despair to see how under degradation human decency gets erased. Only a few maintain it.I'm a fan of Jim Shepard's short stories, and have appreciated them because his perspective tends to carry an unusual twist to it. The Book of Aron is perhaps one of the most conventional things he's written in that it's missing that twist. After all, when you take on the Holocaust, there's only one direction you can go. Certainly no room for whimsy here! But the book--as is to be expected--is well-written and you can feel every moment as you meet that inevitable slide at the end.

The child has the rig...