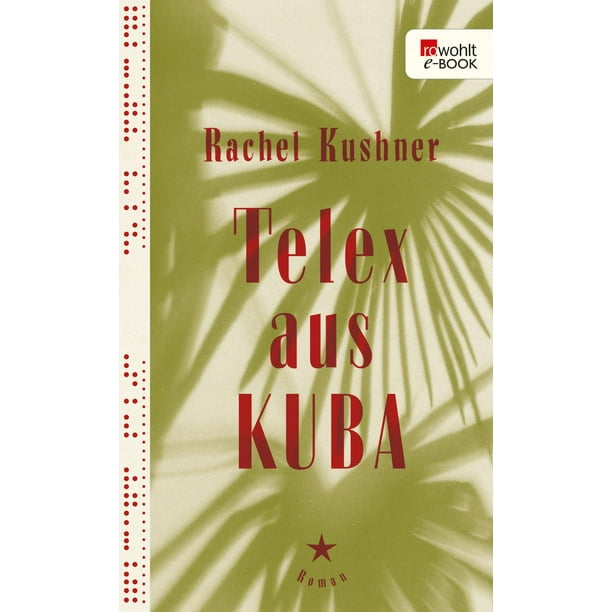 Rachel Kushner's "Telex From Cuba" is an excellent first novel, probably the best one I have read this year. The novel creates a vivid view of pre-Castro Cuba--a country full of life, color, and dark secrets. Despite the description on the book flap, "Telex" is really an ensemble tale, covering the six years before Castro's Revolution in Cuba through the eyes of a group of Americans that are in Cuba working for American companies. The novel's storytellers are mostly women and children, whose collective naivety of the strings holding up their comfortable lives in a tropical paradise brings an interesting perspective to the story. As the story progresses all of the characters become more aware of the oppressive conditions that make their lives possible, and of the rebel cause that exists beyond their picturesque doorstep. Although the novel jumps around a lot between characters and their distinctive narrative voices, it does not feel choppy. Kushner does an excellent job of timing the increasing awareness of her characters along with the progression of the rebellion so that both crescendo at the same time, creating an excellent pace and intensity in the novel. Even though as the reader you know how the revolution and the story will ultimately end, Kushner's narrative style keeps you engaged throughout. I would recommend this book to anyone looking for a compelling read, or anyone with an interest in Castro's Revolution or Cuban history. The book certainly made me more interested in several of its central subjects--the United Fruit Company, Castro's Revolution, US Government involvement in Cuba--and gave me a new perspective on the consequences of Cold War politics and American Imperialism.

This book starts strong. At times it lost me a little, but it always pulled me back, and the last perhaps 50 pages are particularly good. There are some common threads between this book and Kushner's follow-up, The Flamethrowers (which I LOVE): revolt, sons of the powerful joining a revolt against their own, characters named Giddle and Valerio. There's something about women and disappointing affairs in there, too. For as much as I've pored over The Flamethrowers, it may well be worth it for me to read Telex from Cuba again to draw out more of the significance of those connections, and also to reinforce Telex's themes. Kushner is a good writer, and even in the parts where she lost me a little, I felt compelled to keep going for her words and for the upshot that I knew was coming, and knew would be worth it, and (while not mind-blowing) it was.

Reading her first book last was interesting (I started with The Flame Throwers, then read The Mars Room, and finally Telex from Cuba). There's a progression, or development, from Telex to Flame Throwers to Mars Room. All of them have an historical-fiction sense (well, recent history) that gets less and less central from her first to her third book, but maintains a reportage--a connection with social issues--element while keeping the fictional characters central. Telex from Cuba is the most historical in some ways, with the story of the Cuban Revolution a constant in the background, like she does with the Red Brigades in The Flame Throwers (although there, the political history is even more backgrounded and only one of the subplots). In all three novels there are strong, rebellious women characters who wind up teaching us something important about the social and political undercurrents that form the historical background. The Rachel K character in Telex is perhaps not as clearly defined in this way (in comparison with the central character in The Mars Room), but the lack of definition is part of the mystery that intersects with the Cuban Revolution such that we can imagine different possible futures for her. The other intriguing aspect of Telex is how it manages to tell the story of the Revolution without really taking sides; its nonjudgmental perspective makes it possible to get closer to what it may have been like to experience that period, especially from an ex-pat, outsider's point of view. (Brian)

"There it was on the globe, a dashed line of darker blue on the lighter blue Atlantic. Words in faint italic script: Tropic of Cancer...She pictured daisy chains of seaweed stretching across the water toward a distant horizon." -Page 1 Eight year old Everly Lederer is on her way to Cuba from the U.S. in 1952 because her father has taken a new executive position with the United Fruit Company. Her life in the sheltered white American community is one of privilege and yet she feels a special connection with their Haitian houseboy. K.C. Stites is a nine year old boy who's father is an executive with the United Fruit Company. He develops a fondness for Everly over the ensuing six years that she can't return. These two characters are brought to life by Rachel Kushner in her story of the years leading up to Castro's 1958 revolution and the time when the Americans were forced out of Cuba. At the other end of the island, in Havana, Christian de La Maziere, a Frenchman who is haunted by the fact that he abandoned his countrymen to fight with the Germans in WWII, and Rachel K, a Cuban cabaret dancer, are involved separately with the political upheaval of the time. Kushner cleverly weaves their four stories through time and location and paints a fascinating portrait of life in Cuba at a time that was dangerous and would, eventually, have an impact on tens of thousands of lives for years to come. Her description of life in the jungle with the rebels demonstrated her explicit research while the story of Batista's strafing of the American enclave was riveting. Through the development of these characters we learn that children can sometimes be the adults, that racism knows no bounds, that privilege comes with costs, that ideals are difficult to maintain, and that what you're fighting for is not always what you get. I especially liked the way the last few chapters were set in 1999 where K.C. looked back at that time and Everly actually went back to see what had changed in Cuba. It's hard to believe that this is Kushner's first published novel; it's that good and a finalist for the 2008 National Book Award. Highly recommended.

Telex from Cuba is a fictional portrait of 1950s, pre-Castro Cuba. The point of view constantly shifts among a large cast of characters, many of whom are Americans living in Cuba and working for American companies engaged in the explotation of Cuba's abundant natural and human resources. Kushner's lush, detailed descriptions of the Cuban landscape--natural, political, and social--reveal her deep knowledge of this particular place and time. This well-researched and lovingly depicted setting is this book's real strength. Kushner captures the spirit of pre-revolutionary Cuba perhaps better than any other novel ever has. Unfortunately, the other aspects of this novel--including the characterization and plot development--suffer in comparison. Telex from Cuba is more of a fictionalized history than a fully developed novel. The characters are fairly generic types that remain static and underdeveloped. The plot revolving around the primary characters is fairly directionless to start with but is made even more so by a distracting subplot about a weapons dealer and a high-class prostitute that never blends into the overall narrative structure of the book. Telex from Cuba transports readers to an exotic locale but fails to deliver an interesting story once there.