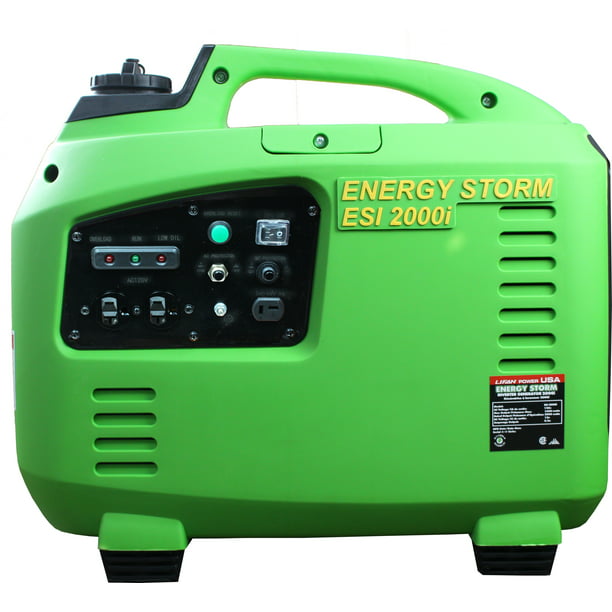 We aim to show you accurate product information. Manufacturers, suppliers and others provide what you see here, and we have not verified it.
The LIFAN ESI 2000i-CA (California Sales Compliant) is part of our unmatched, complete line of Digital Inverter Series. It produces the “Cleanest and most pure Power” with a Sine Wave Distortion of less than 2%. The compact design and light weight allows for easy transporting and storage. This unit is great for Camping, RVing, Tailgating, or General Use around the house. Tailgater/Camping Special, Energy Storm ESi2000i-CA (California Sales Compliant) 105cc Gasoline Powered Inverter Generator, light weight power, 50 State and Canada Sales Compliant

this generator does everything I need, and I didn't have to spend a fortune on any features I did NOT need. 1800 running watts. no remote control, and no parallel hookup available. I didn't need those. so when I found this model for less than half of the amount of the loaded one, I was very happy

There was a little confusion because it's called a 2000, in the Box I found basically a 2200 inverter generator I was very pleased it's a very simple to operate. a very simple-minded working generator it's quiet it does exactly what you wanted to do make fantastic electricity after you add gasoline and oil to the motor. it's stronger than your standard 2000 watt inverter generator such as Pulsar Powermate or Honda my experience so far is that it's an excellent purchase for the price. I would gladly do it again should this one break or fall off while I'm traveling down the road or someone Idiot steal it. with this generator running at a basic idle the runtime seems to be about 8 to 9 hours I'm totally fine with that it ramps up when more is plugged in so far I have plugged in my heavy-duty Dyson vacuum and it ran it perfectly probably will outlive the Dyson vacuum what I recommend purchasing this generator absolutely I have a Honda1000, a Powermate 2000 a predator 3500 and this seems to hold its own amongst all of them for Quality fit finish and price point. However I have not tried to parallel it simply because I haven't tried to I'm sure in time I may but it is my experience that a 2200 watt generator inverter is capable of power and almost everything in your house less your hot water heater or any 220 Appliance which would also include the stuff you would think the needs lots of power but may not such as your washing machine your vacuum your air conditioner all kinds of things that we need quite a bit of power it seems to work just fine.

got this to bring out on my boat to keep the batteries charged by plugging in a battery charger so i don't go dead while playing my radio. my last generator was a 1000 watt 2 stroke and i could even set the charger on 12 amps without the charger shutting down so i had to set it to 8 amps to work. well that generator started running rough so i seen this for $236 with free shipping so i said why not..i just tested it today and that same charger ran on 12 amps not problem. i wanted to step it up a notch and try my big charger and it worked like a champ..the same as house power, i even set it on the 200 amp engine start setting and even tho the dial said it was only drawing 40 amps it is still impressive..this shale work just fine..i just hope the durability is just as good..it is pretty quiet but does got a little weight to it

Easy to set-up (just add oil and gas). Started up quickly and ran steadily for over 4 hours on a tank of gas. Worked great. Noise level was acceptable. Got it for power outages at the house. Ran the internet and my coffee maker. Could have run the refrigerator, but the power outage was short enough that I did not need to do so. Came with all the tools needed to maintain it as well. Even a spare spark plug.

I have several generators and what I like about this one, in particular, is the price. my advice is always with most any generator is to completely check it out making sure it does what you want it to do. don't leave it in the box till your ready to use it. ( load test to your complete satisfaction. And read the manual. sometimes we think we know it all.. this one works fine. I will be using it around 1700 watts.

1. Look at the pictures?! I see 2 regular plugs
by Franny
46
2. Yes two conventional 3 prong outlets, plus one for 12 v battery charging (an adapter comes with the generator), and a USB connection also.
by Nascarnation
10
2 Answers

1. From what I've read the unit loses power quickly with altitude. It will operate, but probably produce well below the max rating. You can contact Lifan in Arkansas USA headquarters, they are good to deal with.
by Nascarnation
00
1 Answer

1. Yes this unit is powered by a 105cc 4 stroke Lifan engine. It runs fine on 87 octane fuel with 10 percent ethanol.
by Nascarnation
00
1 Answer