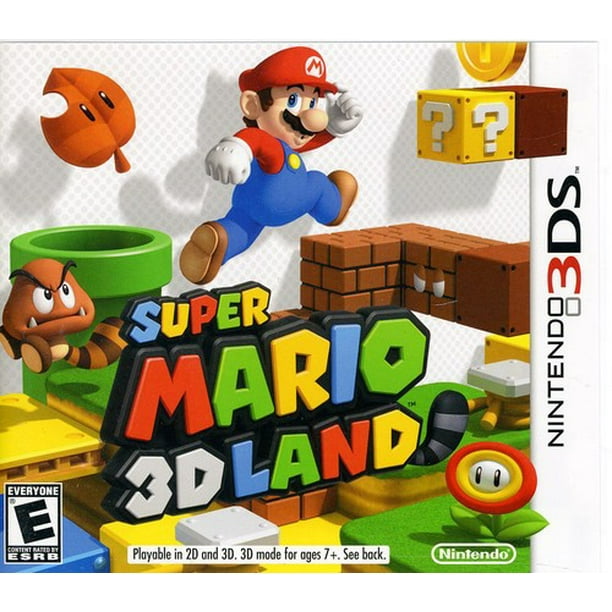 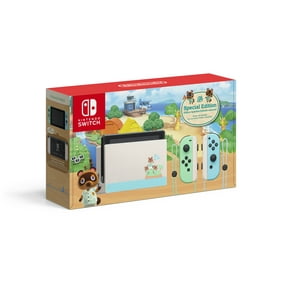 We aim to show you accurate product information. Manufacturers, suppliers and others provide what you see here, and we have not verified it.
Super Mario 3DS Land for Nintendo 3DS

What others said when purchasing this item
For my granddaughter.
Haywood, purchased on May 8, 2020

Own a 3DS, then why not the best game for it?

Super Mario 3D Land is the game I would recommend to anybody skeptical about the Nintendo 3DS. The glasses-free, stereoscopic 3D effect that comes standard with the system really shines in SM3DL. Judging distances really adds to the challenge, pushing you to be more precise with your platform hopping (especially in the eight special worlds unlocked after defeating Bowser normally) and the graphics in SM3DL really use the system's capabilities to their potential. While initially I was taken aback by how some of the early levels are so easy and short, it does ramp up in difficulty as you play (again, especially in the special worlds) and you might just find yourself playing until you find every Star Coin and gotten every gold goal flag. Plus, using Street Pass, you can compare your level finish times and compete with your friends and neighbors. Street Pass also earns you more Star Coins and powerups so be sure to keep your system on and with you at all times. You'll never know who else is carrying a 3DS. If you own a 3DS, then why not the best game currently available for it? Buy today!

My oldest son loves this game! It was easy for him maneuver the levels, etc. Great buy for Mario fans:)

MY SON IS IN LOVE WITH THIS GAME, PURCHASED TO GO WITH HIS NEW 3DS AND HE HAS CHOSEN THAT GAME OVER AND OVER AGAIN OVER PLAYING THE POKEMON SUN GAME ( WHICH HE BEGGED AND BEGGED FOR) AND IS WANTING TO TRADE HIS SUN GAME IN FOR ANOTHER MARIO GAME OR SOMETHING ELSE! HE IS TURNING 9 AND LOVES THIS! I HIGHLY RECOMMEND

Bought this game at a great price and it did not disappoint. Lots of fun and gameplay keeps up with tradition of classic Mario games. A great addition and must have for anyone's 3DS library.

Reviewed by KokalaKokala
Written by a walmart.ca customer.
Helpful?
Average Rating:(5.0)out of 5 stars

Every store in our area was sold out of this game, so we ordered it online. My kids used their Christmas money to buy this for themselves and they love it!

I got this game for myself, Somewhat a mario fan. Wii need to get this game. This game was fun but a little on the easy side. Some view are hard to see in 3d but you get use to it. It does remind me of the original mario but the game format is differant. you use a lot of the Raccoon suit and the flying box hat. Each level has about 4 stages and at the end of each level you play against the castle/bowser.

Hey everybody! ThePerfectNarutoRater here with another review! This review, we will be going over Super Mario 3D Land for the Nintendo 3DS! This game is great! Included With The Game: *Game *Booklets and Manuals *Club Nintendo Points Review: (CONTAINS ONE MAJOR SPOILER, READ WITH CARE) This game is great! The graphics are amazing! I'll have to say that I think these graphics compete with Super Mario Galaxy 2, if not better graphics then that. The soundtrack for this game is great! It's basically like any other Mario game where Bowser takes Princess Peach and you have to travel from world to world to save her. There was one thing about this game that I would rate it 4 stars, but this thing makes up for it later, I'll explain, well, the game is short. When I say short, it can take you maybe at least 5 hours to beat the game if you just run through levels quickly. I am currently playing through the game 100% and it's been about 15 hours now. The levels are really short, but this is where it makes up for everything. There are 16 WORLDS! And you unlock Luigi after beating the first Special World or World 9. Anyways, that's the end of the review without trying to give so much away. Thanks for reading! My next review will be..unknown at this current time.

I highly recommend the Super Mario 3D land game for anyone that is a Mario fan. The maps are not as open as Mario Galaxy, but are instead more like 3D versions of Super Mario World or Mario 3 maps. Each one is short- maybe 1-5 minutes in duration, which is perfect for a handheld machine. Each map has 3 hidden Star Coins that are needed to be collected to access some of the later levels in the game, so there is plenty of replayability of the levels trying to get all of the coins. The first half of the game (8 worlds) is fairly easy for a strong gamer, and quite accessible for newer gamers. The 2nd half of the game gets pretty challenging at times, especially for newer/younger players.

This has the best level design for a Mario game so far. The final encounter with Bowser is awesome! The 3D is well done with a lot of things seeming to really come out at you. Sometimes the 3D does make things a little more difficult to maneuver but you can alway turn it off for those parts. The graphics are colorful and very clean looking, no jagged edges. I am 28 years old and found this game to be very enjoyable. This is classic mario all the way with modern graphics and gameplay. Highly recommend.

I like this game and i enjoy playing it. It has new features like suits with special abilities, and cool underwater levels. I liked everything about the game except a few things. For me the game was overall to easy ( although it was a challenge to my 7 year old brother ) and i expected at least 10 worlds ( the game has 8 worlds ). This is a great game and is better than all the other mario games in my opinion. i just think it was a little short and i beat it to fast. :)

1. Yes! On the side of the 3D screen there's a slider that adjusts the 3D depth from Deep to Off. Though there are some parts of the game that makes clever use of 3D and it's really fun to see.
by Xpon
Helpful?
2. Yes
by SasquatchWasHere
Helpful?
3. yes. I would play with the 3d on though because the 3d effect is amazing!
by DROD8500
Helpful?
4. It is a 3ds, and yes you can. Just adjust the depth slider!
by GAMER556
Helpful?
5. Yes! Adjust the depth slider!
by GAMER556
Helpful?
6. yes you can on any 3ds game you can choose to have 3d on or off by sliding the 3d switch on the top screen
by brybry102
Helpful?
7. Yes
by alliegator333
Helpful?
8. Yes. All 3DS games can be played in 2D only just by sliding the slider to off. No 3DS game requires 3D to be on.
by wampdog29
Helpful?
9. Yes.
by Jenmomof3blessings
Helpful?
10. Yes You Do Not Need To Do 3d
by Mario86
Helpful?
11. On the new 3ds xl system you can turn off the 3ds option.
by PatDor
Helpful?
11 Answers

1. no. :( only 3ds games can be played on the 3ds.
by YazluvsPokemon
Helpful?
2. no, the game its self is 3d and you need that feature in most levels.
by buyshopaholic
Helpful?
3. no this game is for only 3ds but they do have a game for the dsi called new super mario bros
by Chrisalex9
Helpful?
4. No, only on the 3DS.
by itsjustme66
Helpful?
5. No 3DS games only work on the Nintendo 3DS device.
by Sergio126
Helpful?
6. This game is only available on the 3DS. It will not work on the DSi
by Sunstyle
Helpful?
7. I was told by an associate that you can buy the 3d games and play in any DS system. Although you will not experience the 3D in the game it still will work to play. My kids wanted the game so im tying it on a DSlite.
by amol3803
Helpful?
8. I'm afraid not. The 3DS is a more powerful system than the DS, DS Lite, DSi, or DSiXL. It's not just a 3D-DS it's a whole new system capable of more than what the DS series is capable of. With graphics that can be compared to the Wii or even the X-Box 360.
by Xpon
Helpful?
9. No
by SasquatchWasHere
Helpful?
10. No, but ds games can play on the 3ds. ;D
by GAMER556
Helpful?
11. No. Only the 2DS, 3DS and 3DSXL
by wampdog29
Helpful?
11 Answers

1. No it can not. It can only be played on a 3DS.
by BlackTechFusion
Helpful?
2. No it cannot, as it does have DS in it's name it's a completely different system. looking back there is the DS, DS Lite, DSI, DSI XL, and now the 3DS. It's like if you bought Aleve and then the next day they came out with Aleve Extra Strength. They have the same name but the Aleve Extra Strength does more than the Aleve.
by NPD2
Helpful?
3. No, only on the 3DS.
by itsjustme66
Helpful?
4. This game is only available to be played on the 3DS. It will not work on the DSi XL
by Sunstyle
Helpful?
5. No.
by ForeverWalmarter
Helpful?
6. No. This is only made for the 3DS.
by ThePerfectNarutoRater
Helpful?
7. I'm afraid not. The 3DS is a more powerful system than the DS, DS Lite, DSi, or DSiXL. It's not just a 3D-DS it's a whole new system capable of more than what the DS series is capable of. With graphics that can be compared to the Wii or even the X-Box 360.
by Xpon
Helpful?
8. No, only 3ds. :D
by GAMER556
Helpful?
9. No. Only the 2DS, 3DS and 3DSXL...
by wampdog29
Helpful?
9 Answers