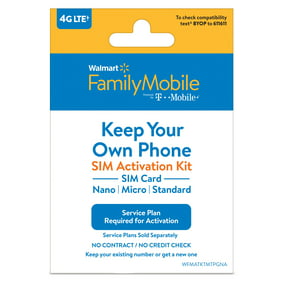 Had three sim cards in the package, Verizon, T mobile and AT

Comment from department -
Hi. This is Cristy from Straight Talk Wireless. Thank you for taking your time to give us 5-star ratings. Should you need assistance, please do not hesitate to let us know. Have a nice day!
Average Rating:(5.0)out of 5 stars

I've never had to order a SIM card before so I was nervous about it being the correct one but it was. It was delivered early.

Hard to find lately in Cali but have several straight talk phones. Same towers, half the price monthly

Comment from department -
Hi. This is Arianne from Straight Talk Wireless. Thank you so much for the review. Should you need further assistance, please let us know.
Average Rating:(5.0)out of 5 stars

Exactly what I needed

Had a Straight Talk, bring your own phone account. Bought new phone and this Sim card is exactly what I needed.

Comment from department -
Hi. This is Cristy from Straight Talk Wireless. Thank you for giving us the opportunity to service your cellular needs. It is delightful to hear such positive words, and it’s always a pleasure to serve our users. Have a nice day.
Average Rating:(4.0)out of 5 stars

Bring your own phone and get a sim card

The directions were not very clear. There was no place that said that one needed to call to speak to a representative (after going through numerous selections and repeating oneself several times before actually reaching a live person) in order to register the sim card. Once that was taken care of, the sim card and phone worked well. Please give better directions!!!

Comment from department -
Hi. This is Janet from Straight Talk Wireless. We apologize for the trouble that you encountered with our service. Your concern had been noted and escalated to provide better service in the future. For future reference, you may chat with us at http://bit.ly/2CuBvXO any queries or concerns you may have. For your convenience, our representatives are available Monday-Sunday from 8:00 AM to 11:45 PM EST. You may also text the key word HELP to 611611 to view our self-service menu with a list of help key words with valuable information. Have a nice day.

1. Hi. This is Katrina from Straight Talk Wireless. You have to use the original SIM card of your phone. We also need to check if your phone is compatible to be used in our service. To get started, please copy this link http://bit.ly/2CuBvXO and paste it on a new window for chat support. You may also text BYOP to 611611. For your convenience, our representatives are available Monday-Sunday from 8:00 AM to 11:45 PM EST. Have a great day!
by StraightTalk Wireless
Helpful?
1 Answer

1. Hi. This is Cristy from Straight Talk Wireless. It is compatible as long as your new iPhone 11 Plus Max is eligible with our Bring Your Own Phone (BYOP) Program. Compatible phones include GSM unlocked phones (operating 850 and 1900 MHz bands), and some other CDMA technology compatible phones. For CDMA phones, serial number is needed to check its eligibility. For more information, text the word BYOP to 611611. Thank you.
by StraightTalk Wireless
Helpful?
1 Answer

1. Hi. This is Frank from Straight Talk Wireless. Unfortunately, we do not support Smartwatch. Thank you.
by TracFone Wireless
Helpful?
1 Answer