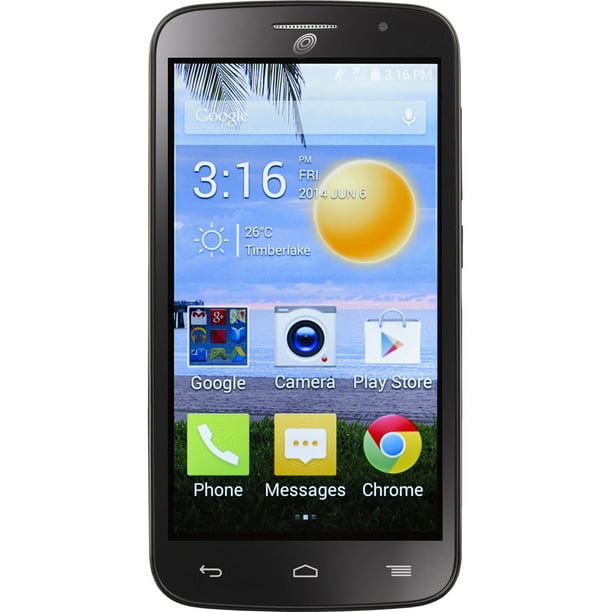 We aim to show you accurate product information. Manufacturers, suppliers and others provide what you see here, and we have not verified it.
Alcatel One Touch Pop Icon - black - 3G - 4 GB - GSM - smartphone

I've been with straight talk since June, I had an Optimus Logic at first, then in October I bought this phone, since it was bigger than the S3, had a better processor as well. This phone hasn't have any issues i dealt with so far. big screen, comes with good pre loaded apps, and the battery is great. Only thing i dislike about this phone.. 1. Very few cases for it. other than that its amazing for the price. If you dont wanna spend tons for a Galaxy or IPhone you should get this phone!

Its a great phone! Battery life is excellent. It is a 5 inch touch screen so that's a major plus! When you first turn the phone on you'll notice all of the home screen icons are huge and looks very odd. That is easily changeable, just go to Setting, Home, and click on "Android Default" and the phone will look like other android home screens as its supposed to. I have no complaints with this phone, its big, clear call quality, the 3G internet speed is decent... overall great phone!

I was thinking of buy the Galaxy 3 but for the price of this phone It was will worth the buy the service is great and i think its just as good as the Galaxy phone. the battery life is great 12hour before charging that if your not playing games. Like all phones playing the games eat battery life. For the money you can't beat this phone. I recommend it to everyone.

I bought this after having an LG Showtime for about 6 months. It is a much better phone than the Showtime. The apps run great with no lag time. The battery life is much better too. The only negative is the screen gets pretty washed out when outdoors. I have tried the camera only a few times and it seems pretty good. Overall, I am very happy with this phone.

I really liked this phone. The only thing I could say "bad" about it is that it doesn't have the LTE Service on the Verizon Network. As of this date, Straight Talk seems to only have one LTE Verizon phone. Also, I think given the competition, Cricket, MetroPCS, and TracFone, this phone on the StraightTalk network also is a bit pricey. Those other companies are giving this phone away for $99. The phone itself is a good phone. VERY nice large screen with TONS of features. Easy to use and you get used to it fast. It is nearly the size of a Tablet at 5". Once you start using it you won't want to put it down. Overall it is worth it. I would imagine in the future, it will come down in price though as all the Straight Talk phones seem to!

1. This phone does indeed have an LED flash. You can see the flash in the 3rd picture above provided by WalMart.
by Jarryed
Helpful?
2. It has a LED flash which makes it's easy to take a picture under low light condition.
by CommunityAnswer
Helpful?
3. does this phone come with a sims card were you can change it to att
by shelly1970
Helpful?
3 Answers

1. According to their manual, 5GB emmc + 512MB DDR2 RAM.
by wgilmour
Helpful?
2. My phone says it has 2.06 GB of total usable space with out adding an-up to 32 GB SD card.
by Luvdeals1
Helpful?
3. It has 4 gb of internal memory. I used to have the zte majesty phone also, but the Alcatel phone is MUCH better. Great battery life and a great phone overall
by lmw92
Helpful?
3 Answers