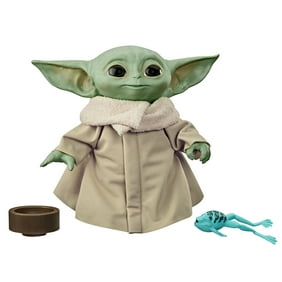 This toy is not suitable for ages under 3 years. It contains one or more of the following items marbles; small ball; or small parts.
We aim to show you accurate product information. Manufacturers, suppliers and others provide what you see here, and we have not verified it.
Kids and fans alike can imagine the biggest battles and missions in the Star Wars saga with figures from Star Wars The Black Series! With exquisite features and decoration, this series embodies the quality and realism that Star Wars devotees love.The two-man AT-ST is a lightly armored walker featuring chin-mounted laser cannons and side-mounted weapon pods. The two-legged transport, dubbed the Scout Walker by many, serves as a recon and patrol vehicle.This 6-inch-scale Imperial AT-ST Driver figure and AT-ST Walker vehicle from Star Wars The Black Series are carefully detailed to look like the Imperial driver and vehicle from the Star Wars films. Figure features premium detail and multiple points of articulation, and vehicle features detailed, movie-accurate design.Additional products each sold separately.Star Wars products are produced by Hasbro under license from Lucasfilm Ltd.Hasbro and all related terms are trademarks of Hasbro.

Re-issues are where it's at(-st)

This is a re-issue vehicle originally from the legacy collection with an all-new figure included. The legacy vehicle had weak hip-joint plastic prone to breaking. I haven't determined if the new vehicle is improved but at least I now have one that's not broken. It's a very well detailed vehicle for the value.

Reviewed by HappyRancorHappyRancor
Written by a walmart.ca customer.
Helpful?
Average Rating:(5.0)out of 5 stars

Worth every penny and more

Reviewed by joethefortjoethefort
Written by a walmart.ca customer.
Helpful?
Average Rating:(5.0)out of 5 stars

This is a great addition to any Star Wars collection.

I am so happy with this AT-ST that I want 4 more, 1 for my mother who wants one and the other 3 for my collection, giving me a total of 4 them, because I like even numbers!!

Reviewed by jayloz5jayloz5
Written by a walmart.ca customer.
Helpful?
Average Rating:(3.0)out of 5 stars

Good, but not great.

Good, but not great. The walker has a hard time standing up. You can eventually get it to stand after a great deal of messing with it, but for the price, it shouldn't be this difficult. Pack-in figure is nice.

A copy not as good as the Original.

I havent bought this one due to the exorbitant $60 price tag, but it looks like the same model I bought my Stepson 10 years ago with the Endor packaging. If it is the same, it's not as good as the Original 1980's or even 1990's POTF2 line. The legs are not locked, so it wouldn't stand up... giving it a wobbly base... they actually wobble around as if a gang of ewoks just tripped it with a bunch of logs. In an attempt to position the legs where it could stand unaided, one leg broke off, actually snapped, not at a place where supposed to and it was forever broken. The cannon is not canon.... I hate when Hasbro adds stupid fake looking rockets. In the 70's and 80's we didn't need rockets, we actually used our imagination, something kids today don't know how to do. Finally, they have it listed as coming with an AT-AT Driver.... it's an AT-ST.

It doesn't stand up. Legs are cheap plastic with loose joints. They can't hold up the top part, and they easily fall off. Decent looking toy, but very poor execution.

If you would like to share feedback with us about pricing, delivery or other customer service issues, please contact customer service directly.
1-1 of 1 questions
by Vader1275September 21, 2018