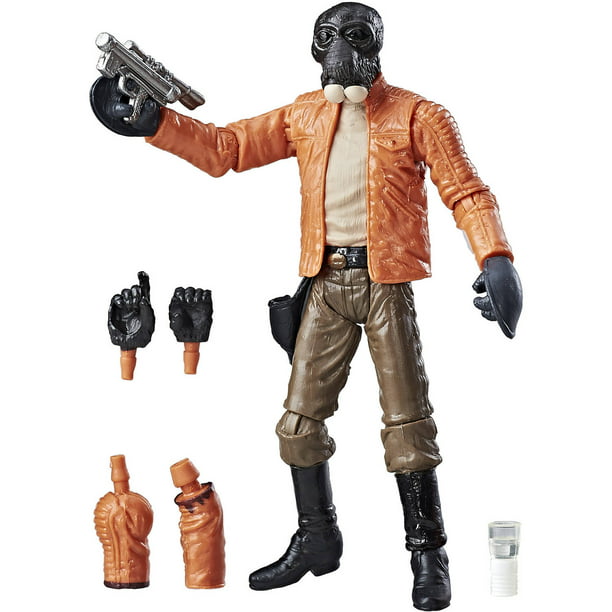 This toy is not suitable for ages under 3 years. It contains one or more of the following items marbles; small ball; or small parts.
We aim to show you accurate product information. Manufacturers, suppliers and others provide what you see here, and we have not verified it.
Kids and fans alike can imagine the biggest battles and missions in the Star Wars saga with figures from The Black Series! With exquisite features and decoration, this series embodies the quality and realism that Star Wars devotees love.

A burly Aqualish thug, Ponda Baba smuggled spice for Jabba the Hutt. Ponda was one of the alien barflies escaping the heat of Tatooine's twin suns when Luke Skywalker and Obi-Wan Kenobi visited the Mos Eisley Cantina.

Kids and adults alike can re-create the exciting stories of good versus evil in a galaxy far, far away with this 3.75-inch Ponda Baba action figure from The Black Series.

Build an epic collection with this and other figures and vehicles from Star Wars The Black Series, each sold separately. May the Force be with you!

Star Wars products are produced by Hasbro under license from Lucasfilm Ltd.

Nephew loves this, its a great toy and very durable

Although I found two of these at Walmart during the figure's original release in the Vintage Collection, I passed on them as I'm not a huge Walrus Man fan or a fan of Hasbro replacing original card back photos with updated ones (even if it's an improvement). When I saw this figure on clearance for $5 in Black Series packaging, though, I went ahead and got one. The figure's costume and paint are accurate, the sculpt is good, and the articulation and accessories are outstanding. Hasbro certainly went the extra mile by including several extras such as a drinking glass, the alternate "wolfman" hands and severed arm pieces, as well. My only real criticism is the scale of his head, which is somewhat small when compared to the actual movie costume. Walrus Man's head was rather large and is not accurately reflected in this figure's sculpt.