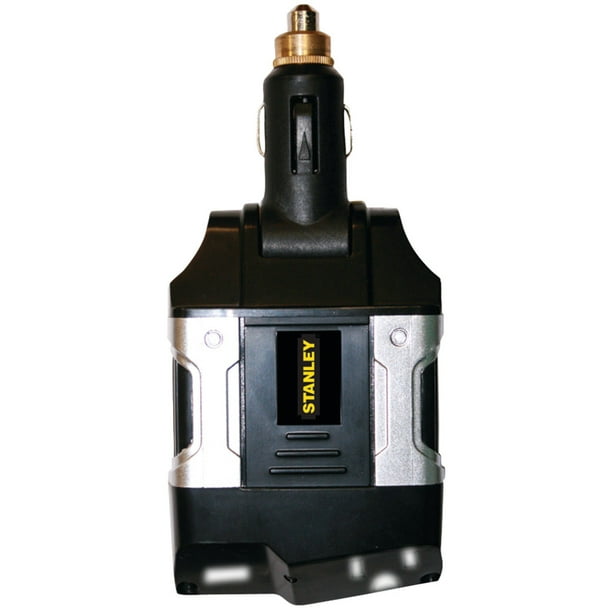 We aim to show you accurate product information. Manufacturers, suppliers and others provide what you see here, and we have not verified it.
STANLEY PC1A09 100-Watt Auto Power ConverterStanley 100 Watt Plug Inverter

Output non-sinusoidal. Refer to manual. To prevent fire, do not cover or obstruct ventilation openings. Do not mount in zero-clearance compartment. Overheating may result. For continued protection against risk of fire, or electric shock replace only with same type and ratings of fuse. Provided with integral protection against overloads. Neutral floating.

Instructions: To reduce the risk of injury, user must read instruction manual.

This 100w inverter is excellent and runs my Toshiba 15 inch satellite laptop without a problem. The plug is a tight fit in the cigerette lighter but twisting it when insertng helps it go in easier. Runs silent and does't get that hot considerng it has no fan. Unlike some of the other inverters, the modifed sine wave output more closely matches AC power so should be more compatible. Very pleased and recommend the inverter.

It's quiet as mentioned in the ad. You don't hear the cooling fan at all, not like other brand I had before.

I use the Stanley inverter when traveling to keep my laptop and cell phone charged and to power a small printer. It works perfectly. Previously I had another brand which looked similar, but contained a tiny cooling fan which made enough noise to be annoying even when driving. The Stanley is completely silent. Whatever you buy, get one with an "adapted sine wave" output like this Stanley. A second previous inverter I owned, with the more common square wave output interfered with my vehicle air bag system causing it to intermittently go into alarm while driving.

I bought this inverter to use for my son's nebulizer on our daily commute to school every morning and I am pleased to say it work's great. I didn't know what to expect because I had never used an inverter before, but am pleasantly surprised.