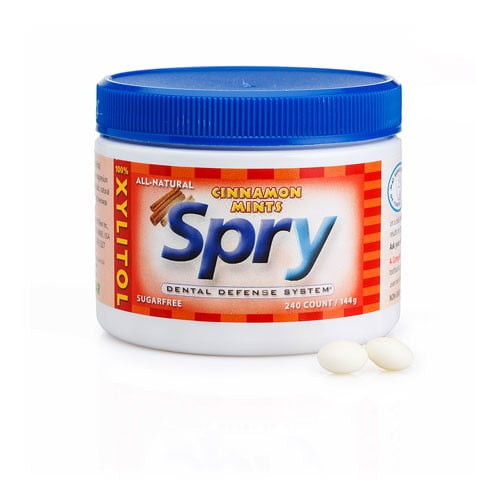 Or get it by Fri, Oct 23 with faster delivery

We aim to show you accurate product information. Manufacturers, suppliers and others provide what you see here, and we have not verified it.
The Spry Cinnamon Mints will get your taste buds buzzing while also keeping your mouth clean. Having bad breath feels gross and tastes even worse. Many people choose to eat mints to combat it. But now you can take your bad-breath prevention a step further with Spry Mints. Spry Mints not only freshen your breath, but they also defend against dental health problems. Each mint has .5g of xylitol?a natural sweetener. Xylitol also doesn?t allow the bacteria to stick to the teeth. This quality means the bacteria can?t colonize in the mouth. Because they can?t thrive, they also can?t produce their bi-product, acid, which is the culprit to tooth decay and cavities. With the regular use of Spry Mints, you will not only go throughout your day with fresh breath, but you will know that your teeth have the defense they deserve.Spry All-Natural Mints Cinnamon

Dosage: For best results let Spry Mints dissolve slowly in the mouth after each meal. Ask your dentist and hygienist about the amazing benefits of xylitol.

As the info says, these are sugar free and sweetened ONLY with xylitol, which is supposed to be good for teeth and even to help prevent ear infections I hear. I've used the cinnamon and spearmint flavors. I love the cinnamon mints. The spearmint is pretty bland for me. The cinnamon has intense flavor, like those little red cinnamon candy ("red hots") so it might be too much for small kids. I would get gum for kids anyway and not mints because they are small enough that a child easily might get one down the wrong way. Also for some reason, the cinnamon mints I got are much softer than the spearmint ones. They are very firm to start with, but soften up after just a few minutes so they can be chewed up if you want.

I bought these cinnamon mints because of dry mouth problems -- but they don't just help with that, they tase great, sort of like the old candies Fireballs, but not as hot. You'd never know they weren't regular candy! I'll definitely buy more. P.S. the lemon ones are great too!

I have read many reviews on several different brands of xylitol mints plus I have tried five brands & these are still my favorite. My only complaint is that they don't last long enough. Some people don't care for the change in texture of the mint but that is one of the things I like about them. I tried Spry's other cinnamon mints and I didn't care for them because they were really lacking the cinnamon flavor that I love so much. I never cared for the taste of Biotene so I was so happy when I found these. I was aware of the benefits of xylitol for quite some time because one of the dental hygienist's at the practice I go to had attended a conference but I don't really use any sugar so I didn't know how I was going to be able to fit it into my diet for the oral health benefits. I only wish xylitol had been discovered years ago because it would have saved me a lot of money on dental bills plus probably saved teeth! I constantly suffer from dry mouth from medications so I use these throughout the day & XyliaMelts while I'm asleep since they stick to my gums. Everyone should really incorporate the recommended daily dosage of xylitol into their diets for better oral health. These are a very tasty way to do just that!

If you like cinnamon you will like these mints. Sweetened with xylitol ( Keep away from pets) Good for your mouth and great for your breath

The Best Flavor of All

I've been hoping that they would come out with Cinnamon flavored mints since they already have Cinnamon gum. It is now my favorite flavor--highly recommended.