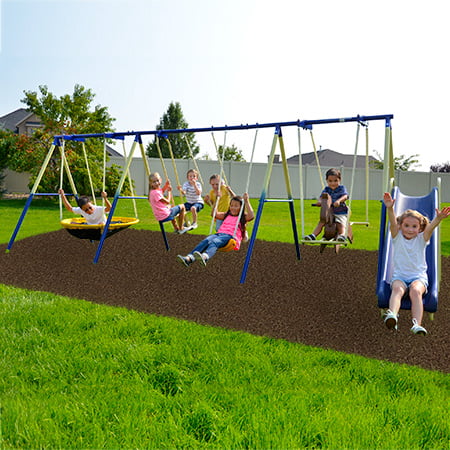 proposition 65 reasons:This California Proposition 65 warning is ONLY for residents of California. California Prop 65 Warning: This product contains chemicals known to the state of California to cause malignant neoplasms and/or reproductive toxicity. Do not allow infants to chew on the product as this may lead to exposure. For more information, please contact customer service.

This California Proposition 65 warning is ONLY for residents of California. California Prop 65 This product contains chemicals known to the state of California to cause malignant neoplasms and/or reproductive toxicity. Do not allow infants to chew on the product as this may lead to exposure. For more information, please contact customer service. www.p65warnings.ca.gov

After months of looking around for a swing set for our almost 2 year old son (and one on the way!), we decided on this one for the value, ease of assembly, and amount of activities offered. My son is EXTREMELY active (doesn't sit still even in his sleep!) and I knew the basic swing/slide combos would bore him quickly. We had narrowed it down to this one and one that had a trampoline attached, but I liked this one for the uniqueness of the rocking horse and flying saucer. After checking it out in the store, we went ahead and purchased it, one of the best decisions we ever made!!! It took my husband 4-5 hours to put it together by himself - he said the only part that was problematic was that the slide was a bit of a pain to put together, otherwise it went together pretty easily without any problems (just a little time consuming, but not nearly as much as the wooden sets!) - the person who commented about not tightening bolts until the very end must have not read the instructions too well, because it repeats that step over and over again throughout. Once together, it has provided my son with hours and hours of fun!!!! We replaced one of the swings with a toddler swing, which was really easy to do (you will have to buy separate eye bolts if you do that as the ones they have connected to the swings don't really come off), though we have since discovered that even at 2, he can do pretty well on the other regular swing (I think it helps that it's made of hard plastic - not the bendy kind - and sits decently low to the ground), and he LOVES the rocking horse - he stares out our kitchen window longingly saying "horse! horse! horse!" - it's definately his favorite part of the set! And when he wants to go on the flying saucer, he says "sleep!" because at 23 months, he's small enough that he can lay down and stretch out in it and he thinks it's pretty funny to close his eyes and pretend to sleep (it's kind of like a kiddie hammock for him!). Even the slide, which I was nervous about him being able to get up it himself, he climbs the ladder like an expert with no problems! He's not a big fan of the glider yet, but I think that's still a little too big for him yet. He never comes inside willingly, I always have to plan outside time to come to an end right before a mealtime or some other event and resort to bribery to get him to stop playing for a while! Would 100% recommend this to anyone looking for a great swing set, and you definately can't beat the price for all the fun you get! ...though don't forget to buy an anchor kit if you're not planning on cementing the poles into the ground.

I have only one bad remark it did not come with instructions.Contacted company was able to have them emailed to my phone. Very easy to put together. Great grandchidren enjoying the fun every day

If you want a great swing set this is the one

Just got this for my grandkids. box was in horrible shape on pick up parts falling out I was scared parts was going to be missing ,but everything was there except 1 nut I went to the hardware store and got. My son put it together solo the horse took almost as long as putting up the swing it's self. It took about 7 hours altogether. No c/o on the swing it's study and my grandkids love it don't think it was any problems with the holes and screws. Glad I brought this one I had looked around for a few weeks and read reviews and settled on this one.

The swingset is great but I couldn't build the whole thing because they didn't send all the hardware to connect the swings so I had to call the company on Monday August 8 and I am now waiting for the pieces.

For the price you get a lot of swing set. Plenty sturdy for young kids under 7-8. Some of the parts were wrong or mislabeled. Had to make more than one trip to the hardware store. Took us a week to put it together since stuff kept going wrong, but all in all it's a good swingset. Fix the parts problems and I would give it 5 stars. It would also be nice if the bolts that anchor the swing seats to the frame were made to change out the swing. We had to go buy separate bolts to attach our baby swing.

My family was beyond thrilled to finally purchase a swingset. After doing my research, I decided this would be the best option for our family members. The instructions clearly stated it would take approximately 2 1/2 hours to complete the assembly, being very capable carpenters - we thought that this would be no problem... boy we're we be disappointed. A large number of pieces did not have the proper hole ailment which would not allow our screws and bolts to be assembled. One of saucer chains was not threaded (which does not allow it to be assembled). The screws for the slide are way to short, not even long enough to go through the connecting pieces, let alone put a nut on the end to secure it in place. There were so many issues with assembly that it took us 7hours to do our best to correct issues and complete it!!!! What a disappointment. The entire day was gone and the kids had maybe 20 minutes to play on a particularly assembled play set. I now have to contact the manufacturer.

MOM1, March 1, 2017
Verified purchaser
6723
Comment from SportspowerLtd - 3/10/2017
Hi MOM1, I am very sorry to hear that. We are always looking at improving our products so I thank you for your comment. I hope you were able to contact our customer service at 866-370-2131 from 9-5 East Coast time. If you need anything else, please email me at customerservice@natusinc.com and I can help you with any questions you may have.
Average rating:1out of5stars, based on0reviews

Absolutely zero quality control. Several screws had poor threading and were useless. Half of the plastic caps were broken off the washers on arrival, and the washers broke easily without any torque on them. Step 3, and we decided this will be going back to the manufacturer.

rusting through! less than 6 months old!

Rusting through less than 6 months later! not sure who I contact about that but there are several places that are almost rusted through on this set. don't waste your money!

1. I don't believe so its not set up that way. It's very long like 1 1/2 swing sets or maybe even 2.
by mamamiller10192011
40
2. I'm not sure if you are asking if the entire length may be shortened by leaving off a swing or not. If so, the answer is no, it cannot be shortened because the main frame is the length it comes. You build it first then attach the parts. If you leave off a swing, it will just be an empty spot.
by BeActiveMom
20
3. NO, the rocking horse mounting is a part of the leg supports and if you leave it out the structure will not have the support it needs.
by jtheswee
30
4. No on your first question. And the swing set is approximately 122 inches long or a little over 10 feet.
by Kingsfan13
20
5. No it cannot be left off. Thanks
by SportspowerLtd
40
5 Answers