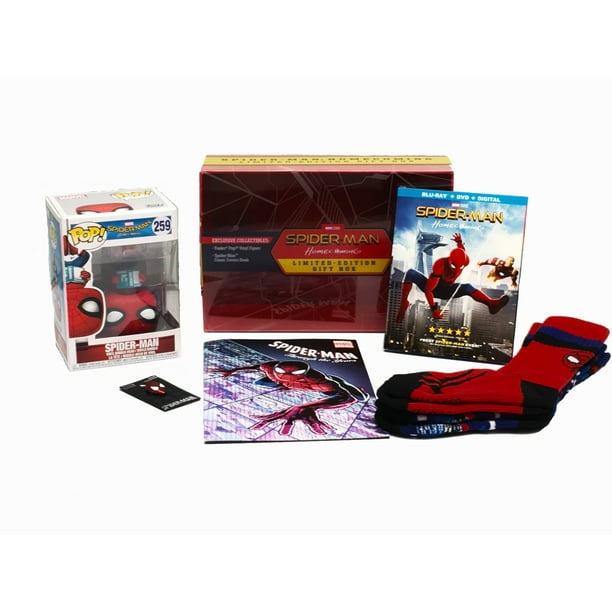 We aim to show you accurate product information. Manufacturers, suppliers and others provide what you see here, and we have not verified it.
A young Peter Parker/Spider-Man (Tom Holland), who made his sensational debut in Captain America: Civil War, begins to navigate his newfound identity as the web-slinging super hero. Thrilled by his experience with the Avengers, Peter returns home, where he lives with his Aunt May (Marisa Tomei), under the watchful eye of his new mentor Tony Stark (Robert Downey Jr.). Peter tries to fall back into his normal daily routine – distracted by thoughts of proving himself to be more than just your friendly neighborhood Spider-Man – but when the Vulture (Michael Keaton) emerges as a new villain, everything that Peter holds most important will be threatened.Vudu Instawatch eligible when sold and shipped by Walmart. Marketplace offers not eligible for Instawatch.

My daughter loved it. It has everything a spiderman fan wants

A pretty solid box worth the price with nice items

I jumped on this set when it became available for pre-order, I had seen pictures of the Pop figure that comes in this online and instantly wanted this figure. This one is so cool, I love when Funko does something really cool and unique with some of their figures and this doesn't disappoint. When I bought this, like many people I had already gotten a copy of the movie. And I know a lot of people were disappointed with the movie being in this box for various reasons, like it wasn't a 4K copy, or this box was released too late and since a lot of collectors had already bought the movie earlier they weren't going to get the box. But for me I'm happy with getting this copy of the movie in the box. I had picked up a 4K copy of the movie, and the movie looks incredible in 4K so I'm glad to have the 4K, but I loved the movie so much, and I don't mind having another regular blu-ray copy around, and it does seem like the regular blu-ray had a lot more special features than the 4K, like the gag reel and some featurettes. Worst case if you do get the box and already had the same copy of the movie, you could just give it away as a Christmas or Birthday present, or just resell it. The other stuff in the box is somewhat decent. I mean I considered the box to be a good value with having just the Pop and the blu-ray, so the other stuff was just sort of a bonus. I wasn't sure what to expect with the socks, Funko has gotten really into making socks and putting them in their boxes lately, but they're not Funko socks. They are Ultimate Spider-man socks, if you remember that cartoon that was around a little while ago, they are childrens socks from that cartoon. So that was a bit of a let down, because they are cool looking socks, and I would have worn them if I could have. But they are pretty big for childrens socks, they say size medium (6-8 ½) and they almost fit me, so maybe people who have smaller feet would be able to wear them comfortably. I don't know if you could get other sizes in different boxes, like if you went to the store to buy a box and you could maybe see what size the socks would be through the clear part of the box. The pin is pretty cool, it's a nice sort of mellower metallic color and I liked it more than I thought I would. The comic book isn't really a comic book, it's more of a printed copy of various covers of Spider-man comics over the years, it was kinda cool, but it's definitely the weakest thing in the box. Overall I loved this box and I'm really glad I got it, it has an amazing Pop figure and I think it's a good value. It would make a great Christmas present for Spidey fans and collectors.

I love everything in this gift box, but the Funko POP was damaged and had orange markings on the bottom of the box. Besides that, totally recommend anyone who is a Spider-man fan!

1. No, it is not region free.
by CommunityAnswer
1 Answer

1. This Bluray set is Region A.
by CommunityAnswer
1 Answer