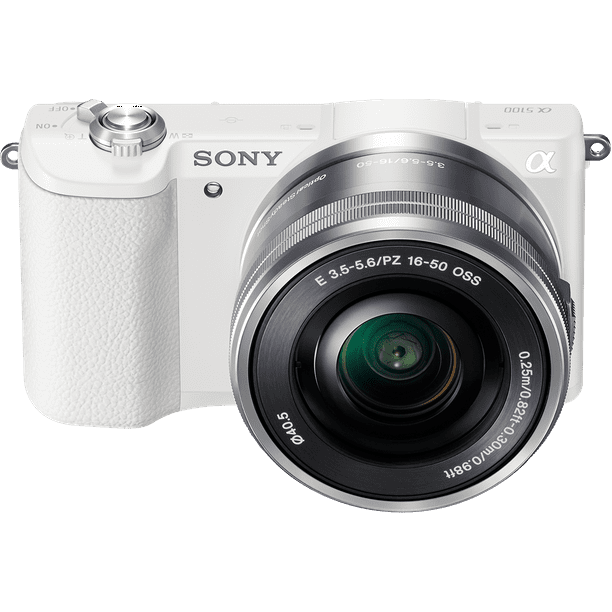 We aim to show you accurate product information. Manufacturers, suppliers and others provide what you see here, and we have not verified it.
Take clear pictures and capture moments quickly with the Sony Mirrorless Camera. Lightweight and easily portable, it delivers 24.3MP of detail for clarity and detail even in low light. Ultra-fast auto focusing gets sharper views without the need for manual adjustment. The Alpha a5100 also allows for instant sharing of your photos with friends and family via your smartphone, connecting with the device through Wi-Fi. Taking not only still images, it records Full HD video to truly capture the action. Flip-up the touch screen LCD to take selfies easily. This camera with lens is adjustable from 16-50mm with a power zoom lever and features a built-in pop-up flash when additional light is needed.

Great camera give you beautiful pictures.

very handy and have good features that you can find in DSLR cameras.

I upgraded from a tiny Sony Cybershot point and shoot camera. This guy blew me away. It's not that much of a hassle to carry around since it still fits in my purse, but it packs a punch of a dslr camera. The sensor is downright amazing and is 4 times bigger than my previous camera which makes a huge difference, especially in low light. I tested the a5100 in Asia in all sorts of conditions and it surpassed all my expectations even in auto mode. The flip screen is perfect for selfies and the color is true to reality. I haven't felt the need to use the flash yet since it performs so well in low light. Only minus is that my iphone does bettet in burst mode (not sure why) and there is no view finders so it's a little bit harder to see in bright light. Other than that this camera is my new best travel companion!

I own some pro cameras Dslr Nikon D and Canon for years, some point and shoot digital Convinience carry (small size) always have been lacking in my quality department, sometimes on my short getaway vacations of 5 or 4 days I seem to want to pack light including my camera equipment. Sometimes unwantingly leaving myself quality deprived, not anymore. With what I get now with my Sony is a very Big Bang for my small size travel companion, you can't get any better than this camera unless you go bigger and I have that with my other cameras which I use in a more setup environment with slave flash and umbrellas for photo shoots. For a get up and go situations I can count on a small camera to give me unparalleled results. Very happy in my decision to purchase a camera that can fill the size gap and Convinience of a small carry camera that packs a large punch!

This is a fast light weight camera with a great sensor with high speed and low light capabilities. The fast high ISO are no noisey joke, one can take waterfall shots by moonlight and get nice starfields. Mirrorless has a clear form advantage and the reliability of the focus is very good, which is great, because you can not set it yourself. The manual modes are not very manual. However, the "superior auto settings" will bracket for you if necessary, and make that decision quickly, well under two seconds. And you do have some nice bracke modes for RAW work. This is a good value for those who want a big sensor in a small body and want to use other lenses. I might buy a second one of these.

This camera takes great pictures - very clear and great definition. It does tons of things automatically. The pano feature works very well. When you take a group picture it also takes a portrait of the people it thinks are the main subject - you get both pictures with one click. It's so cool. Took it to Switzerland for vacation and got great pictures of the Matterhorn!

I have always been a Nikon fan but Nikon has not done the small camera Mirrorless well. Sony, has always been the tops in making things small and this camera is no exception. It's a pleasure to carry around my neck for long time periods and the quality of the photos is amazing.

I Love this camera! The quality is outstanding and it is easy to use. I have used a point and shot camera for 30 years. This is an easy upgrade and being a mirrorless camera it is very small and portable. A very easy camera to take on your travels. This camera also has many high quality lenses and accessories that you can use on a upgrade camera. Has fun.

Written by a customer while visiting sony.com
Average Rating:(4.0)out of 5 stars

Amazing for it's size, lens options could improve

Some background about me. I'm serious about photography but don't always want to carry around a backpack full of gear. My approach with the a5100 was to replace my aps-c DSLR with it. I think I'm going to settle on still having a dslr (but a full frame one), keeping the a5100, and using them each about 50/50. The Sony a5100 is really awesome for a compact aps-c mirrorless camera. Most of the negative reviews come from the lack of an evf or physical controls. The a6000 has those, so if that's what you want, get the a6000. I prefer the a5100 because its just small enough to fit into a pocket with most of the lenses I have. I don't find switching settings too slow without the physical controls and the screen is pretty viewable in sunlight if you crank the brightness to sunlight mode (although admittedly an evf would be awesome if it stayed small). Anyways the dynamic range is amazing (although really only useful if you shoot raw and post process), and the high ISO noise is good compared to other aps-c cameras, although still far from the full frame competition. The only real downside to this camera is the lens selection/prices and the autofocus is awesome on slow moving subjects but isn't as good as a dslr when it comes to sports or fast action (I don't have kids, or shoot sports too often so this is fine by me but I'd imagine that's a lot of people's concern). For the lenses I have the 55-210mm, the 20mm pancake, the 35mm f/1.8, the 50mm f/1.8, and the kit 16-50mm. I really like prime lenses for the large aperture and the general image quality (plus Sony's image stabilization works like a charm). The 50mm f/1.8 is awesome. Great image quality at a good price. The others disappoint a little, and some of the ones I don't own and even worse that don't exist are a letdown too. The 35mm should cost a little less or be a little sharper, and I really wish there was a high quality prime in the 20-25mm (~35mm full frame equivalent) range that was essentially like the Zeiss 24mm but doesn't cost as much (I don't care if it drops the Zeiss name). Canon, Nikon, Fuji, and Olympus have this, but the $1,100 for the Zeiss is simply too much. That lens is nice but nowhere near good enough to justify the price. The main competitors charge half. It's also, unfortunately my favorite focal length, so instead I'm using the 20mm pancake, which is decent for a pancake, although I'd personally rather have a bigger lens that's sharper and with a wider aperture, and I'd pay up to $600 for it. Unfortunately too it seems Sony if focusing more on full frame lens development--not too many releases in the last year for aps-c, so my hope isn't likely to be fulfilled unless they do another price drop on the Zeiss. Also a faster standard zoom or telephoto would be great as well.

Written by a customer while visiting sony.com

1. Yes, this camera is new.
by CommunityAnswer
1 Answer