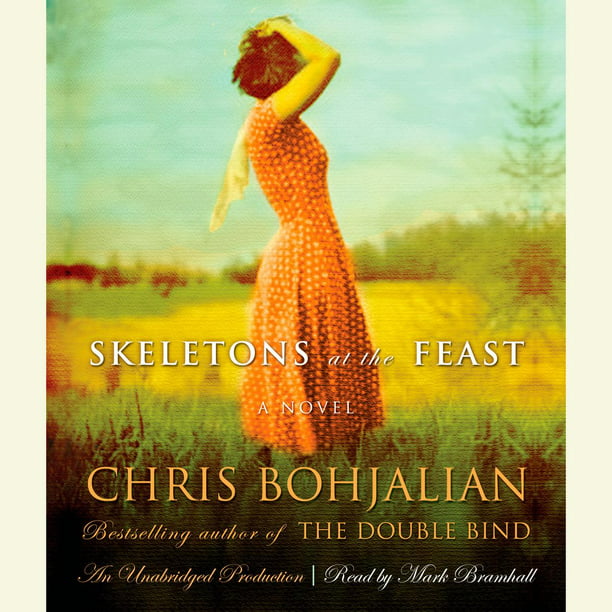 Skeletons at the Feast - Audiobook

In January 1945, in the waning months of World War II, a small group of people begin the longest journey of their lives: an attempt to cross the remnants of the Third Reich, from Warsaw to the Rhine if necessary, to reach the British and American lines.

Among the group is eighteen-year-old Anna Emmerich, the daughter of Prussian aristocrats. There is her lover, Callum Finella, a twenty-year-old Scottish prisoner of war who was brought from the stalag to her family’s farm as forced labor. And there is a twenty-six-year-old Wehrmacht corporal, who the pair know as Manfred–who is, in reality, Uri Singer, a Jew from Germany who managed to escape a train bound for Auschwitz.

As they work their way west, they encounter a countryside ravaged by war. Their flight will test both Anna’s and Callum’s love, as well as their friendship with Manfred–assuming any of them even survive.

Perhaps not since The English Patient has a novel so deftly captured both the power and poignancy of romance and the terror and tragedy of war. Skillfully portraying the flesh and blood of history, Chris Bohjalian has crafted a rich tapestry that puts a face on one of the twentieth century’s greatest tragedies–while creating, perhaps, a masterpiece that will haunt readers for generations.

Skeletons at the Feast - Audiobook

This is a poignant and...

This is a poignant and extraordinary story of a family in the midst of WWII. Beginning in the autumn of 1944 at their farm home, Kaminheim, the Emmerich family brought in their harvest with the help of some prisoners of war that were made available to them for the task.The prisoners were German, British and there was one young man from Scotland, Callum Finella. At this point things had not changed too much for the Emmerich family. One son Werner had gone to be a soldier and another was about to leave. Helmut who was twin to the daughter of the family, Anna. Their father had served before and was preparing to enter this war as well. The fact of war, and the horrors of what was happening around them had not really come home to Anna, Mutti or Theo the youngest brother. This was about to change. By the approaching winter They, along with the one remaining prisoner of war that had been able to remain with the family were about to flee their home. The stories of the death camps, the reality of what was really happening to other Jews had intruded finally into their near idyllic existence on their farm. Their days of comfort were over for what soon looked to be forever. While attempting to find safety and their way to a new life, they met up with many others making the same journey, all of whom affected their lives. Some of them passed through quicky, others lingered and changed them forever. The characters captivate, the story enthralls, and be warned, this is a story that will stay with you for a very long time. It will touch your heart and mind in ways you never dreamed a book could. This is a keeper, a gift book and a reread.

Reviewed by mckaitmckait
Written by a librarything.com customer.
Helpful?
Average Rating:(5.0)out of 5 stars

I eagerly anticipate new works by Chris Bohjalian. The subject of this novel, WWII, was a departure from his prior works. It was fabulous. Written with amazing insight into the perspective of Jews, Russians, and Germans, it was an emotionally draining book to read. Skeletons is one of those novels I continue to think about weeks after finishing it, which is another indication to me of its greatness. Novels about war should not be light reading and this one isn't. But you will be greatly rewarded if you pick up this book.

Reviewed by ddirmeyerddirmeyer
Written by a librarything.com customer.
Helpful?
Average Rating:(5.0)out of 5 stars

This was a good WWII novel, well developed characters that pull you in and great setting descriptions. I was disappointed in the abrupt ending, it felt like the author was suddenly tired of the book. The epilogue seemed to only be a quick after thought.

Reviewed by TrinityTrinity
Written by a librarything.com customer.
Helpful?
Average Rating:(5.0)out of 5 stars

Perhaps the best WWII novel I've read. Not only is the story told from the perspective of both Germans and Jews, but it also deals with the closing months of the war, which is not generally the focus in this sort of book. Courage and heroism are evinced by many of the characters: the German mother protecting her children, the German boy trying to live up to the standard of his father and older brothers, the young Jewish man who escaped from a train heading to Auschwitz, the Scots POW who is taken along on the trek west to provide proof of good will to the Allies. Rarely does one see kindness side by side with unspeakable atrocities the way one does in this novel. The horrors of war are brought home, and we understand that everyone, regardless of nationality or political ideology, suffers. Three-dimensional characters and fine writing added to my pleasure in reading this book. Some episodes were tough to get through, but seemed quite likely realistic portrayals of what might have happened on a journey of this sort. I've read other novels by Bohjalian that I liked, but this is by far the best!

Reviewed by BellettresBellettres
Written by a librarything.com customer.
Helpful?
Average Rating:(4.0)out of 5 stars

Many books have explor...

Many books have explored the exodus of Europeans and Jews who fled the approaching German army during World War II. In Skeletons at the Feast, Chris Bohjalian examined another type of evacuation - this time of a Prussian family trying to stay steps ahead of the vengeful Soviet army. Loosely based on a diary of young Prussian girl, the story followed Anna, her mother (Mutti), her young brother, Theo, and Callum, a Scottish POW who was assigned to Anna's estate in Prussia. Together, they migrated on foot during the harsh winter to the safety of western Germany. Intermingled with Anna's story were also the narratives of Uri, a young Jewish man who disguised himself as a German soldier to escape concentration camps, and Cecile, a French Jewish woman who was imprisoned at a German "work camp." All of these stories showed the atrocities of war on civilians and how they endured the hardships of fatigue, hunger, severe weather and artillery fire. In the depiction of Cecile and her fellow female prisoners, Bohjalian spared no details. It was downright graphic. So too were the scenes that depicted the bitterness of the Soviet army as they invaded Germany. These scenes were hard to read and not for the faint of heart. I often wonder how these things happened within recent history, and then I remember that genocide still goes on - just in a different place to different people. And that's why I think it's important to read books such as Skeletons at the Feast, even though it can be hard to do so. Skeletons at the Feast had a pedestrian approach to a hard subject matter. There was no deep symbolism or foreshadowing in this book - just words and lines strung together to tell a story. However, I often found that Bohjalian employed the "tell, not show" type of narrative, and the different character viewpoints were, at first, unparalleled and hard to follow. Nonetheless, the book was a page turner - one I would recommended to readers who enjoy books set during World War II or the Holocaust.

Reviewed by mrstrememrstreme
Written by a librarything.com customer.
Helpful?