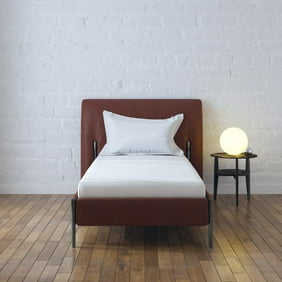 Soft, pressure-relieving surface that conforms to the body. Ideal for side sleepers

Thinner mattress for toddlers, teens, and guest rooms for a simpler option

No additional padding for an ultra-supportive surface

Looking for something else?
Explore all mattresses

We aim to show you accurate product information. Manufacturers, suppliers and others provide what you see here, and we have not verified it.
Features
The Signature Sleep Essential 6 inch Coil Mattress incorporates all the necessary attributes to ensure a perfectly sound sleep, night after night, and year after year. This Essential 6 inch innerspring coil mattress is comprised of sturdy tempered steel coils that quickly respond in a great way to your body' s different pressure points while resting. These coils are nestled between polyester and foam layers for dream-worthy ultimate comfort, peaceful, and uninterrupted night's sleep. Also this eco-friendly foam mattress offers superior support that quickly adapts to your body's shape. This Signature Sleep mattress comes in a rolled vacuum sealed bag, so that you can easily transport it home. It is made of eco-friendly foam and is toxic free as well.Signature Sleep Essential 6\ Coil Mattress:Signature Sleep Essential 6\" Mattress Tempered steel spring coils for years of unwavering support.Coil Counts: Twin = 216 / Full = 312For your convenience and even more cost savings
Specifications
Shipping and Returns

Not happy with a purchase? No problem. We've made returning items as easy as possible. And, most purchases can be returned for free. Learn more about our Returns Policy. Returns Policy. 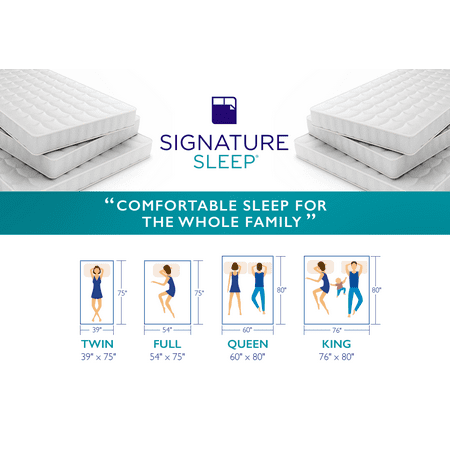 When I purchased this bed for myself I was kind of scared but when I got it it felt great. I love it. It is a steal for such a great bed and its off the floor as well no need to sleep on the floor. Great buy. College students, parents or anyone it is a good product. You will have to add more cushion to it I bought two mattress toppers that is the only issue I had with it.

When I ordered this mattress I was scared that it was rolled up in a bag, but it wasn't too bad to get out except when I cut the plastic it came in I almost hit myself. So be a little careful. I use this everyday and I love it. First mattress I've ever bought and would recommend. It is comfortable but I am going to get a mattress topper to make it a little more plush. Very satisfied with my purchase.

needed something quick and inexpensive-I got both ! what I didn't expect is how easy it was to set-up and how comfortable this mattress is to sleep on. great purchase !!

I was using the inflatable queen before, absoluty loved it but so did my cats! My alternative to purchasing my fourth and more replacements was this 6" matress. Wish I would have got it in the first place. It is great!

Shipping was excellent! I wasn't expecting it until at least Tuesday and it arrived Saturday. The mattress is quite firm and it is the exact size for a Full platform bed. I wondered whether a 6" would be enough, but even though I am rather large (5'11" 275") the mattress is quite firm thanks to the innerspring construction. This mattress is nothing short of excellent. My only qualm is that I wish it was manufactured in the US. Other than that it is a great value.

After children grew up and flew the coop they took their beds with them. The new "guest beds" in our house became a couple of air mattresses. We didn't want them to be too comfortable and stay longer... :-) But, we have other guests coming for the holidays that deserve something a bit better than an air mattress. We needed 3 beds and mattresses, and decided that daybeds with trundles would be the right answer for us. They could be made into King-sized beds when needed, and made into space saving Twins when not in use. Those are hard to find on a budget in my area, so I jumped online. Wal Mart had these mattresses and some beautiful iron daybed frames that after looking around at about 16 websites, were the best price and had positive reviews. I was hesitant to say the least, and thought about it for a week, before committing to the purchase, but, I'm sure glad I did! I ordered 3 frames, and 6 of these black twin mattresses from Wal Mart, and 3 lift-up trundle frames from Amazon. Wal Mart was awesome - everything arrived super quick, and as advertised, each mattress was rolled up like a pig in a blanket. I wondered how in the world this mattress was going to unroll and be fit to sleep on??!?!? I sighed, and figured I had just wasted my money... We put the frame together - (I'll review it on its requisite item) - and followed the directions on the mattress by placing it on the frame, and carefully cutting away the plastic to release it from its vacuum sealed sarcophagus. It unrolled perfectly and immediately began "re-fluffing". We put it in place, left it for a couple of days, and it returned to its full thickness. Comfort wise - this mattress is SURPRISINGLY AWESOME. Seriously, it has good support, no weird metal projections sticking you in the back, is springy and holds well to weight placed on it (Hercules husband at 6'5", 350 lbs stretched out on it, and this mattress performed like a champ!). Even the black color of the mattress was really cool. I thought it would be weird, but it isn't at all. This might be the best purchase I've ever made online - and trust me - I'm an online shopping fiend. I am one happy camper with this mattress and Wal Mart in general today! I may not like Wal Mart tomorrow, but today, they're most certainly on my good list! :-)

Great mattress for the price

Ive been sleeping on this mattress for two weeks now and am very pleased. Would recommend to a friend.

Could have been better

This mattress wasn't as thick as I would have liked. I got it for my 20yr old son who is 6'5 and weighs 230. He doesn't complain about it but I can tell you I'd never be able to sleep on it. When and if it starts to bother him I will add a layer of full size foam.

The mattress appearance is nice but the comfort level is terrible. It is so hard but what did I expect for such a cheap price. I read reviews on here before buying it and there were quite a few people that said it was a good mattress so I bought it. I wish I didn't because my back hurts so bad. It is so uncomfortable to sleep on. The black color is very nice. It is really neat how it rolls out and expands to normal size but unfortunately not worth buying. For kids it might be okay but for adults....... I wouldn't buy it or recommend it. Thank You Cindy

Full size is NOT worth the great price

We bought this mattress for our guest room. Shipping was fast and convenient. It was fun to watch the mattress pop and slowly grow to full size. After letting it expand for several days, we put it on the bed. The size is perfect - it goes from headboard to footboard, BUT the springs are very uncomfortable and poke us when we were testing it out. We're going to try a foam mattress topper in hopes of salvaging it, otherwise we'll need to find a replacement mattress. I can't speak for the twin, but the full size is not worth it, despite the amazing, affordable price.

If you would like to share feedback with us about pricing, delivery or other customer service issues, please contact customer service directly.
1-3 of 24 questions
by ssarkarOctober 10, 2010

1. They don't ship it in a box, they roll it up like a sleeping bag and put it in a canvas bag.
by Ama616
Helpful?
2. It's not a box, it comes rolled up in a big sack
by alwayslookingformore
Helpful?
3. This part is really weird, it is shipped curled up, like a sleeping bag, with the air removed. When you cut the plastic, it starts expanding into a very nice twin mattress. Never saw this before.
by jboys
Helpful?
4. It is rolled up like a duffel bag.
by Destanieyasmommi
Helpful?
5. Not shipped in a box. It is shipped in a hudge duffle bag. The duffle bag is only as long as the width you ordered, because it is rolled up and the air sucked out for shipping.
by DeLoves2Shop2
Helpful?
6. it comes rolled up
by 032212
Helpful?
7. It doesn't come in a box it comes compressed flat and rolled up in a cloth bag similar to what a tent comes in only LOTS bigger. After you take it out and cut the plastic around it then the mattress unfolds and inflates. I was surprised when it came and wondered how a mattress would fit on the UPS truck. Before it re inflates it is pretty light and easy to pick up and move around.
by jaybird1212
Helpful?
7 Answers

1. No, my sheets look fine. It's a great buy :)!
by HollywoodP
Helpful?
2. only if they are really thin sheets, but because I use a mattress pad, that is not an issue.
by jboys
Helpful?
3. I think it would depend on the color of the sheets you are using. I put a mattress cover on my daughter's mattress and we have no problems w/ the black showing through pale pink sheets.
by Site2StoreAddict2011
Helpful?
4. Depending on what color sheets you use. I have light colored sheets and it shows a little bit
by Destanieyasmommi
Helpful?
5. I'm sure if you had a light color sheet then it would but I have blue Thomas the Train sheets on my sons' & you can't see them.
by TwoRowdyBoysMom
Helpful?
6. Depends on your color and thickness of your sheets.
by DeLoves2Shop2
Helpful?
7. It did on mine but I just switched to blue sheets instead of white and it does not show through any longer.
by cubbybarnes
Helpful?
7 Answers

1. Yes, it is perfect. Better than the usual bunk bed mattresses, almost too big, but it was just right.
by jboys
Helpful?
2. I'm using it for a metal bunk bed and it works great!
by DawgFan1969
Helpful?
3. We took the bunk beds apart and this is the mattress we use on the now single twin bed. I did leave the bunkie board on the bed to help w/ support.
by Site2StoreAddict2011
Helpful?
4. Yes I am using mine on a loft bed and it works great. I would highly suggest this bed
by Pennysreview
Helpful?
5. Perfect choice!
by TheQuietThinker
Helpful?
6. just purchased the full for the lower bunk bed and it's awesome! fits great and super comfy
by biji7337
Helpful?
7. yes would work great for bunk beds
by DeLoves2Shop2
Helpful?
7 Answers