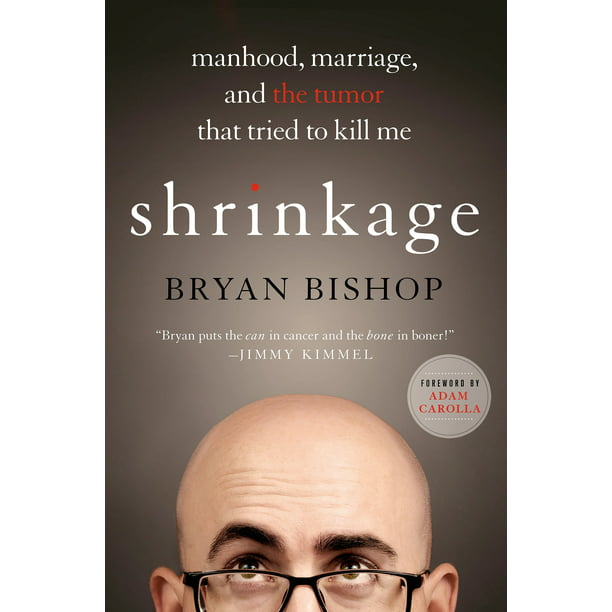 We aim to show you accurate product information. Manufacturers, suppliers and others provide what you see here, and we have not verified it.
The sidekick from "The Adam Carolla Show" traces his battle against an inoperable brain tumor, describing how his promising future was upended by challenging treatments, confrontations with his mortality, and his new life outlook.

An Amazon Best Books of 2014 selection

"If you're reading this, it means I'm already dead. Just kidding."

In 2009, at thirty years old, Bryan Bishop's life was right on track. Known to millions as "Bald Bryan," the sidekick and soundman on the record-setting podcast, The Adam Carolla Show, his radio career was taking off. He was newly engaged. Then, he and his fiancée Christie were delivered a crushing blow when he was diagnosed with a brain stem glioma—an inoperable brain tumor. Suddenly Bryan's promising future was transformed into a grueling schedule of radiation and chemotherapy while facing his mortality.

In this poignant narrative that is alternately heartbreaking and hysterical, Bishop shares the surreal experiences of writing his will with the bravado of a pulp novelist, taking chemo in a strip club, and (technically) the closest he ever got to achieving his lifelong dream of a threesome—when a physical therapist had to show his wife how to bathe him in the shower during his weakened state.

Whether recounting his search for the most aggressive form of treatment, how radiation treatment jeopardized his ability to (literally) walk down the aisle or even smile for his wedding photos, or recalling the time his wife inadvertently drugged him in a pool in Maui, Bishop's inimitable voice radiates through his story.

As the author celebrates how treatment shrunk his tumor and gave him a new lease on life, Shrinkage reveals the resilience of the human spirit—and the power of laughter—during even the darkest times.

Shrinkage: Manhood, Marriage and the Tumor that Tried to Kill Me by Bryan Bishop had me moaning with all his references to Southern California and information for people who haven't ever been there! I had lived there for several years and knew all that stuff! There is a lot about his experiences with the Adam Corolla show. I was beginning to wonder when he was going to get to his experiences with the brain tumor. I did like his stories about his childhood which range true for me, both of us being an eldest child. But as soon as he knew that something was wrong, he won my heart. When his symptoms got so bad that they could not be ignored any longer and he and his future wife, Christi went to hear the diagnosis. The book changed into a heart wrenching story that made me love him and Christy. That turned into a story of determination and courage. He uses gallows humor and that made me identify with him I have a lot of medical problems and that is the best way for me to deal with it. He told the inside story of the difficult experiences that go with radiation and chemotherapy. From then on, he felt like my friend. He is so very honest. One of the best parts of the book is his "tumor tips". He has sound advice for anyone who has a brain tumor or any serious illness. Some of it I wish that I had known a long time ago. I don't have a brain tumor but the advice does apply to my medical problems. The advice is so great, you can't find it on the Internet or in books. Usually this is from friends and relatives who have been through what you are going through. I loved the pictures that are sprinkled throughout the book. And Christy is amazing, she is the epitome of the person that everyone hopes to marry. She is patient, strong, determined and loving. The tone of this book is conversational and made me feel that I would be honored to have Bryan Bishop as a friend. When this book was finished, I really wanted to read more about Bryan. It is hard to say good-bye. I highly recommend this book to all who have serious medical problems and those who want to know what it is like to have an inoperable brain tumor. I received this book as win from FirstReads but that in no way influenced my thoughts or feelings in this review.