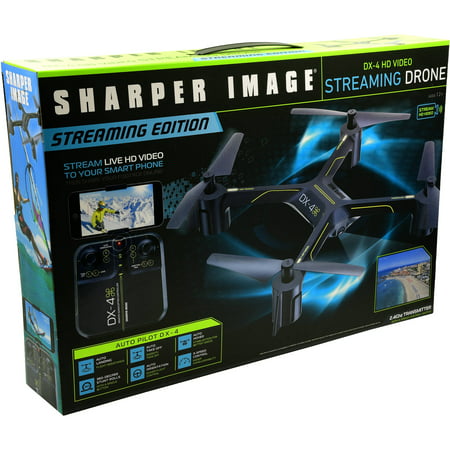 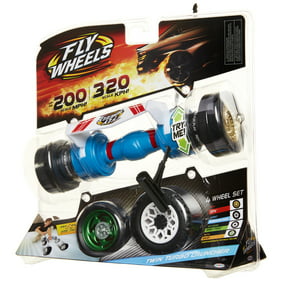 We aim to show you accurate product information. Manufacturers, suppliers and others provide what you see here, and we have not verified it.
Record impressive aerial footage and explore the skies with the Sharper Image HD Streaming Drone. It streams real-time video to your smartphone and also allows for easy sharing. It is easy to take off and land with automatic flight assistance. Stabilized hovering helps to deliver clear video quality. This HD video streaming drone also makes 360 stunt rolls with the push of a button on the included controller.
Sharper Image HD Streaming Drone:

Better than the other one I bought and took back.

I personally thing this is a good product. I bought a sky viper, and thought it was total garbage. I will admit it is a bit on the lower fly time, but aren't they all really? For what it is and the price, id say its about at the top of its game.

This is the first drone I bought. The altitude hold, auto launch and auto land features are excellent. Easy to learn how to fly with this drone. The camera is locked up after 10 or 15 seconds but I did not buy the drone to take pictures I bought the drone to fly. Great toy.

Pretty good for the price.

Pros: 1. Stabilization is good 2. Video quality is quite good 3. Range is better than expected 4. Headless mode works well but as an experienced fixed-wing rc flyer I prefer without, fixed wing flyers should probably also stick with the controller phone holder as it is very easy to get disoriented in VR. 5. Auto land works great and has saved it many times, although it should really be on the same button as auto-takeoff as it is confusing having them separate (or maybe that's just me). Middle-ground: 1. The trims are hard to use and do reset with each flight, but it is possible to get them calibrated in about 30 seconds if you know what you're doing. After that they work great. 2. Return to home would be nice, although that would require GPS which would increase the cost so I can understand why it doesn't have it. 3. Another point where I can understand due to budget, it would be nicer if the camera angle could A. go up as well as down and maybe B. be adjusted in-flight with a knob or slider. Cons: 1. On the subject of the trims: sliders are the best and I'm disappointed that the industry keeps rejecting them, but more importantly the vertical-axis (rudder/yaw) trim buttons are along the top edge on the right side and they DO NOT MAKE NOISE WHEN PRESSED. I think this is a programming bug and it is very annoying. Most RC controllers have the yaw trim buttons below the throttle stick where the auto takeoff/land buttons are and that did catch me off guard a few times. 2. It charges through a micro USB port but only through their included cord-adapter. Considering the size of the adapter they could have easily put that circuitry inside the drone using its existing LEDs as charge indicators. It disappoints me as an android user that I have to take the drone cord everywhere instead of using the convenient regular cords I already have in place. This is my biggest complaint. 3. Auto takeoff puts it in a scarily low hover, would be better if it took it to 6 feet instead of 2. Although this may only apply to outdoor users, I have not tried it indoors. TLDR: It is worth the $80 but don't expect miracles.

I wish someone had told me about the short flight time. Other then that It's a great drone for beginners. Takes great video and still pictures. Easy to shoot a VR streaming video.

I bought this drone for my grandson and extremely disappointed for the money that I spent. First one didn't even work so I took it back and got another one. The second works awesome but the batery life sucks at 15 minutes tops. Just when he starts to get the hang of it, it dies. Try searching for replacement batteries with no luck. I do not recommend this product.

Seriously, this was an absolute horrible purchase and now I'm stuck with it! Didn't even have this 30 days. Upon fully charging and ONE MINUTE into the second flight with it, it literally flew off! We have been looking for this thing to no avail! Wish I would've read the reviews first... Called the manufacture and guess what? They refuse to replace it, told me to go back through walmart. Called Wal-Mart and they can't do anything without the drone, same with the replacement plan people. Go figure. Manufacture chops it up as operator error when several people are complaining of the same issues. If I could give it 0 stars, I would! Wish we could find it to at least get my money back. What an absolute waste! Manufacturer is a joke. Wanted me to pay an additional $47.99 for them to resend me another drone. DO NOT PURCHASE!

Do NOT buy this drone!!! Bought for my seven year old son for Christmas and fully charged over night. My husband took it into our field and use every it a few feet off the ground for a couple minutes to set the trim. After about three minutes the drone just went straight up up up up until out of sight and GONE! The controls did NOT work to bring it down! Can't find it, my son never got the chance to even operate it and customer service refuses to admit any manufacturer/technical error!!! Will not replace, only offers $20 discount on purchasing a new one! Absolutely LIVID!!!

We bought 2 for our teenagers for Christmas. Both have experience with RC products. A motor has malfunctioned on each of the drones in less than an hour of flight time. Neither was damaged due to wrecks or mishandling. Sharper Image is a pain to deal with to try and get support. No one answers the phone or emails. All around, very disappointed.

Broke in the first few hours

I was so excited to use this drone and now I am nothing but disappointed. The charger broke in the first 15 minutes of charging. The little battery I had left was spent trying to play HD video, but I only got a grainy nasty image. I am going to return it immediately and pick up another drone instead.

Up up and away....And gone forever

I bought this for my son. After reading the directions carefully, he and my husband went to a huge open field so the wouldn't lose it. After using the auto take off feature, it kept going up....Up....Up....It got caught in the wind and flew out of sight. Customer service was no help. They said it's user error. , But did offer a small discount on a new one. Sharper Image isnt manufacturer either....It's just branded with their name.