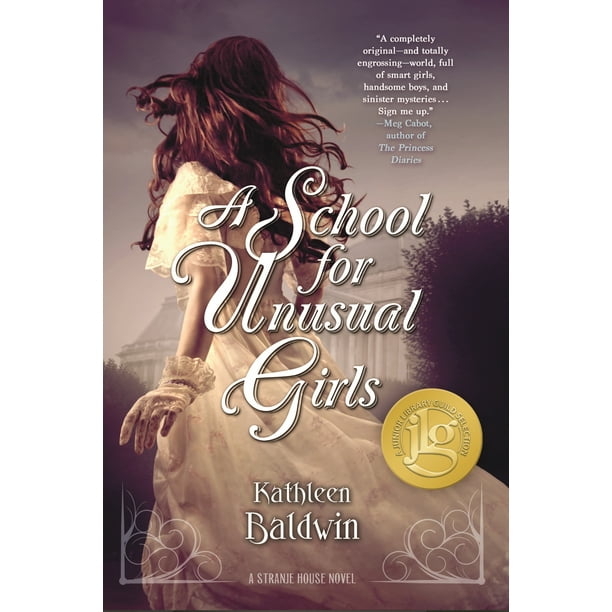 A School for Unusual Girls : A Stranje House Novel

We aim to show you accurate product information. Manufacturers, suppliers and others provide what you see here, and we have not verified it.
England, 1814. After accidentally setting her father's stables on fire while performing a scientific experiment, Miss Georgiana Fitzwilliam is sent to Stranje House where she meets Lord Sebastian Wyatt. Thrust together in a desperate mission to invent a new invisible ink for the English war effort, Georgie and Sebastian must find a way to work together without losing their heads--or their hearts.

It's 1814. Napoleon is exiled on Elba. Europe is in shambles. Britain is at war on four fronts. And Stranje House, a School for Unusual Girls, has become one of Regency England's dark little secrets. The daughters of the beau monde who don't fit high society's constrictive mold are banished to Stranje House to be reformed into marriageable young ladies. Or so their parents think. In truth, Headmistress Emma Stranje, the original unusual girl, has plans for the young ladies-plans that entangle the girls in the dangerous world of spies, diplomacy, and war.

After accidentally setting her father's stables on fire while performing a scientific experiment, Miss Georgiana Fitzwilliam is sent to Stranje House. But Georgie has no intention of being turned into a simpering, pudding-headed, marriageable miss. She plans to escape as soon as possible-until she meets Lord Sebastian Wyatt. Thrust together in a desperate mission to invent a new invisible ink for the English war effort, Georgie and Sebastian must find a way to work together without losing their heads-or their hearts....

Nice alt-history type story with strong and personable female characters. Well-crafted plot with very good depictions of how girls and women were perceived a couple centuries ago and how determined young women who had spunk might have responded. I'm already planning to read the 2nd and third books in the series.

The sad fate of unruly...

The sad fate of unruly and rebellious young Misses in Regency England! Miss Georgiana Fitzwilliam, 'Georgie', is made of stern stuff, a brave heart and a thirst for scientific investigation and invention. Given that her latest experiment (for a very good cause) burnt down her father's stables, the family decided that she needed stern discipline. Georgie finds herself. Carted off to Stranje House operated by the stern headmistress Emma Stranje, by her unforgiving parents, Georgie is abandoned to her fate. In her attempt to escape she overhears the dashing Lord Sebastian Wyatt talking about the need for the invisible ink she was attempting to recreate. What's this! All of Georgie's conceptions are turned on their head and she finds herself caught up in the pre-Napoleonic escape from Elba world of espionage! Now her talents are put to the test as is her ability to believe in herself and to face the idea that she might be loveable. The challenge of Georgie and her character, along with the mystery of the other girls at this very unusual school quickly drew me in. I cheered their actions and hissed with disdain over Miss Seraphina Wyndham, a dark and destructive force. Pure sugar coated venom! A NetGalley ARC

This is the first roma...

This is the first romance novel I've read/reviewed which has been set during the Napoleonic War, a time period when the well-to-do had standards that had to be followed; standards which would appeal to Regency lovers. However, Georgiana Fitzwilliam did not fit this mold nor did she want to. Instead she was a free-spirited young lady who had always been interested in things which had forbidden for prim and proper young ladies at that time. What broke the camel's back as far as her father was concerned about his daughter's continuous unconventional behavior had been when she burned down his stables doing a scientific experiment. He immediately sends her packing off to Stranje House, a school noted for their transformation of girls like Georgie into hopefully what society dictated. Naturally once she arrived there and saw two girls imprisoned in brutal medieval torture devices which she immediately envisioned were to be used in her transformation into a desirable young lady any man would eagerly marry, she quickly began to plot her escape from "Prim and Proper LadyLand." But luckily as she begins her attempted escape she discovers two men who were involved in the same experiment which had caused her father to send her to this school in the first place. Instead Georgie discovers that the Headmistress Emma Stranje, owner of the school, was just as rebellious as she was, along with the rest of the young ladies who were there with her. She also learns that Stranje House was a center that taught its young ladies amongst other things diplomacy, war and espionage, things which no lady would ever be caught doing at that time to make a difference in the world; an opportunity which she instantaneously grabs with both hands, becoming what would be consider today as a feminist of her time. Accepting this chance to do what she loves to do, she immediately gets thrusted into a world of British and French spies and a plot to restore Napoleon to the throne. While she soon has Lord Sebastian Wyatt assistance in her experiments, at the same time, these experiments puts him in grave danger on the continent. She's also begins to be attracted to him. The blend of the various genres which the storyline contains make for a page turning reading experience for many romance genre lovers, besides Regency. Since this blend of genres includes spies, espionage, war, and adventure, male readers might be attracted this book as well, making romance [which a little of is allowed in these genres] to take a backseat. For making this novel appealing to a vast audience of specific genre readers, as well as males, I've given this book 5 STARS, too bad 5 is the limit. I received an autograph copy of this book from the author through the YA Insider Grand Opening Celebration [Week 1] and the above has been my honest opinion.

I loved this book, I was hooked right from the beginning! I was daydreaming about it in my classes, excitement and trepidation about what would happen next at every page turn, and staying up way past my bedtime. I liked the characters in this book, some people say that Georgie is an annoying protagonist because she doesn't believe in herself or her talents. While this is true for some of the book, and it does take a while for her to become comfortable in her own skin, it is easy to see why because of her family. I'd recommend this book to anyone who enjoys historical spy fiction. The story is interesting and the plot is very interesting. The balance between action, adventure, romance, and friendship was perfect and I can't wait to read the next book in this series!

A captivating, fast-paced and historically accurate, A SCHOOL FOR UNUSUAL GIRLS delivers an original story of what may have happened during one of Europe's most historical moments... It is 1814, during the time of Napoleon's exile... war has wreaked havoc throughout Europe, and everyone has endured some sort of loss. The Stranje House has a reputation for reforming rebellious and disorderly young ladies into top-notch marriageable young woman by using extreme measures of punishments. However, we soon realize that much of what is presumed about the house and its inhabitants is a ruse and that there is much more to what is happening behind its closed doors. Georgie is not what her parents desire and demand her to be; according to them she is eccentric, reckless and an embarrassment to them and their family name. What we soon learn from Georgie is that she is an independent young woman that is ahead of her time. She is smart, brave and fearsome; although somewhat quirky and clumsy too (which makes her more favorable and relatable). But nothing, not even her wild unruly red hair, can stop her from always asking questions, studying the world around her and looking for ways to conduct science experiments. She is desperate to develop a solution that could have saved her brother's life, who was killed during the ongoing war. Although the results won't bring back her brother, it would bring her solace to avenge his death with it. The other girls at the house all have their peculiarities as well. Each one has a specific ability almost to a supernatural state, but believable... it is quite a mystery as to how and why these girls have been brought to stay at the Stranje House. They are all quite poised and knowledgable. However, in the end, they are a curious bunch that have managed to live harmoniously and supportive of each other. And then there is Sebastian as known as Lord Wyatt; he is charming and brilliant... the banter between him and Georgie was amusing. And I very much enjoyed watching their love/hate relationship bloom into more. The story is fast-paced, so their relationship develops just as quickly. But done well and tasteful. And I do hope that we do get to see more of them in the next book... even though we are already spoiled by knowing that the next book will be told from a different point-of-view. I highly recommend this book to those who absolutely love historical fiction, to those who love mysteries with spies running about... and, to those who love contemporary reads that have a classic flair with accurate details and well-developed characters set in an awe inspiring period of time! *A hardcover copy was sent to me from the publisher for an honest review. All thoughts are my own.