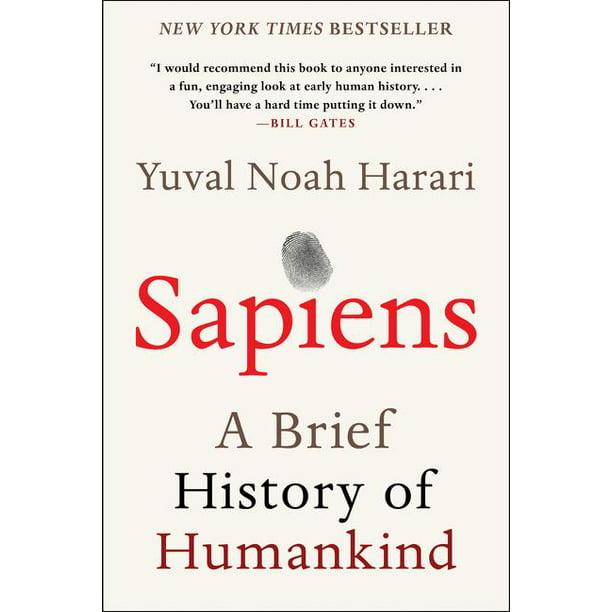 From a renowned historian comes a groundbreaking narrative of humanity's creation and evolution--a #1 international bestseller--that explores the ways in which biology and history have defined us and enhanced our understanding of what it means to be "human."

One hundred thousand years ago, at least six different species of humans inhabited Earth. Yet today there is only one--homo sapiens. What happened to the others? And what may happen to us?

Most books about the history of humanity pursue either a historical or a biological approach, but Dr. Yuval Noah Harari breaks the mold with this highly original book that begins about 70,000 years ago with the appearance of modern cognition. From examining the role evolving humans have played in the global ecosystem to charting the rise of empires, Sapiens integrates history and science to reconsider accepted narratives, connect past developments with contemporary concerns, and examine specific events within the context of larger ideas.

Dr. Harari also compels us to look ahead, because over the last few decades humans have begun to bend laws of natural selection that have governed life for the past four billion years. We are acquiring the ability to design not only the world around us, but also ourselves. Where is this leading us, and what do we want to become?

Featuring 27 photographs, 6 maps, and 25 illustrations/diagrams, this provocative and insightful work is sure to spark debate and is essential reading for aficionados of Jared Diamond, James Gleick, Matt Ridley, Robert Wright, and Sharon Moalem.

This is not an easy book to present or review. It dissects so many parts of human life and culture, that it would be complicated to discuss on that basis alone. And yet one comes to feel that Harari addresses history largely in the service of offering deeply-held critiques and challenges that unfold over the course of the book. Let me just mention that the hardcover first U.S. edition is an admirable physical specimen. Most notable to me is the feel of the paper. The premium glossy high-lustre paper feels extremely comfortable to handle. This book fits clearly into the emerging area of historical study some call Big History. It concerns itself with the broad sweep of the human career. Not quite as broad as the view of David Christian who doesn't limit himself to the human part of the story, but broad in that Harari starts with our proto-human ancestry and concludes with a consideration of a potential trans-human future. Let's be clear: I found no original scholarship here. Harari hews to familiar if wide and inclusive intellectual terrain. He owes a great debt to people like Jared Diamond, David Christian, and numerous authors who have come before. The Cognitive Revolution, the Agricultural Revolution, civilization, modernity. Science and its overthrow of the belief that there was no more to discover about the universe. The interplay between science, capital and government. And on. This is not a criticism. Harari is an articulate and forceful purveyor of ideas. Sometimes he fails to make clear the distiction between scholarship and his own opinions, but for the most part he can be forgiven; his playing fast and-loose can be frustrating (eg. the chapter on the Agricultural Revolution is titled "History's Biggest Fraud"; "having so recently been one of the underdogs of the Savannah we are full of anxieties over our position, which makes us doubly cruel and dangerous"; "the leading project of the Scientific Revolution is to give humankind eternal life"), but it often feels like quibbling in the face of the questions he raises. Or alternatively, one tends to agree but knows inside that there is less certainty in his assertions that he lets on. Harari spends a lot of time on the notion of human success being due to what he calls inter-subjective phenomena, meaning fictions we agree upon, like money or countries but unlike electrons. He wants to remind us of how much of what we take for granted about ourselves and the world -- and which has resulted in our numerical proliferation and material aggrandizement -- is in a deep sense imaginary. He emphasizes the (familiar) dark side of the Neolithic (and post-Paleolithic in general): longer hours, disease, the false lure of acquisitiveness, etc. He suggests that happiness ought to be the barometer of how we live. Are people happier now than they were before giving up the migrant hunter-gatherer life and becoming sedentary participants in civilization? (Acknowledging however that there's no going back) He is forceful in his criticisms of religion and government. His account of money, capital and banking is especially cogent. He emphasizes repeatedly our insensitivity to the emotional harm our practices have on animals. This book is meant to challenge, to be a cautionary tale. There is a dark -- but not necessarily unfair -- thread running through the text. About our potential future as powerful beings: "Is there anything more dangerous than dissatisfied and irresponsible gods who don't know what they want?"; and "But since we might soon be able to engineer our desires too, the real question facing us is not 'What do we want to become?', but 'What do we want to want?'. Those who are not spooked by this question probably haven't given it enough thought." In the end, this is a thought-provoking book. He may not be right about everything, he may blur the lines between scholarship and interpretation, but his critiques are well worth considering. For a thorough introduction to Big History, I prefer David Christian's Maps of Time. For a challenging critique of the human past and future, this book must be reckoned with.

An absolutely brilliant book! Superbly written, engaging, simple explanations of complex concepts - often reads like a good novel. I learned so much reading this book - more than I ever learned in geography and history at school! The ability of the author to summarise the entire history of humankind is amazing. I liked the fact, too, that he had opinions that he argued for. This is a stunning book and a must-read for anyone interested in humanity, how we got where we are, and where we are headed. Can't recommend it highly enough.

Reviewed by spbooksspbooks
Written by a librarything.com customer.
Helpful?
Average Rating:(5.0)out of 5 stars

One of the most import...

One of the most important books I've ever read. Quibbles: no serial comma (except in a few places...and that inconsistency makes it even more frustrating to my OCD), British spelling of words throws me off (e.g. 'faeces', 'oestrogen'), and use of BC & AD instead of BCE & CE

Brilliant. Bold. Fascinating. To say that it's thought-provoking would be a major understatement. I simply wasn't prepared for many of Dr. Harari's arguments, theories and interpretations and the staggering amount of historical time that he covered so aptly! It's not just any history book. Controversial? Yes. But where the author has a point - he is very convincing; where there isn't enough historical information to make a point he honestly says so, all the while producing very plausible theories... Excellent chapter on Polytheism and Monotheism and a great take on Buddhist view of happiness - among so many other fascinating, even if at times "irreverent", insights... Interesting theories about "patriarchal genes" in our societies even up to this day. I also truly see Dr. Harari's reasoning about love-hate relationship between global empires and the societies that they absorbed. What's more, I find the author very objective in his search for answers. All in all, I agree with one of the readers: this book is "most enjoyable and most depressing" at the same time. But it's honest. If I were to choose one book to recommend to my two adult children, this would be the one.

Reviewed by Clara53Clara53
Written by a librarything.com customer.
Helpful?
Average Rating:(5.0)out of 5 stars

I really like this book. Yuval really takes you on a journey that is not easy to get off! I decided to be somewhat disciplined when I read this book, in that I read just the chapter a day. This allowed me to read each chapter slowly, and to think about what he has written. This indeed is the best way to read the book. He asks some extremely interesting questions, and does indeed pose some interesting thoughts. I don't agree with all he has written about Indian history. I think he has made some mistakes there, but that is my point of view. The end is superb, and the fact is that we really do need to think about how we want to treat this planet in the future. It is indeed the only one we have.

Reviewed by RajivCRajivC
Written by a librarything.com customer.
Helpful?