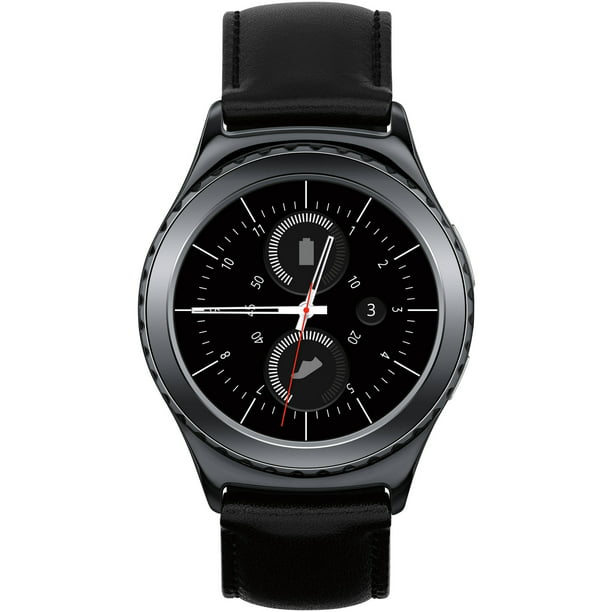 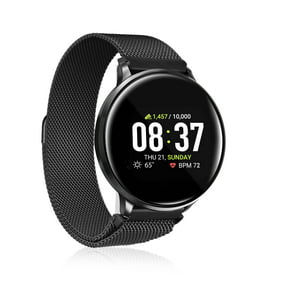 We aim to show you accurate product information. Manufacturers, suppliers and others provide what you see here, and we have not verified it.
Stay connected even when you're away from your phone with the Samsung Gear S2 Classic. It empowers your active lifestyle and continuously challenges you to live better. Track your steps taken with the Samsung Gear S2 classic's built-in pedometer. Check your heart rate and even get a nudge to remind you when it's time to get moving. This product is as attractive as it is practical, as it features a leather band and stainless steel elements. You can use the Wi-Fi or Bluetooth compatibility to connect this device to others, including your phone or PC. Its lithium-ion battery is rechargeable and keeps running for long periods. You can connect the watch to most Android systems.

I've had this watch for over a year now I believe, and now the band falls off all the time. the band isn't ripped or anything, just the little pin that pushes in to both sides of the watch face won't stay on.I am not happy about not being able to wear it. Can someone please help me?

Reviewed by MitchC721MitchC721
Written by a samsung.com customer.
Helpful?
Average Rating:(5.0)out of 5 stars

I love this watch. I've been through a few smartwatches and always returned to the gear fit due to the size and shape. I then upgraded to the s2 for the functionality. This watch is the perfect mix of the two. The notifications, the agenda and the health features and exactly what I need. The classic feels much lighter than the s2 and the ridges on the bezel make it easier for me to use. But what I love is the look, it is gorgeous!

Reviewed by SflgalSflgal
Written by a samsung.com customer.
Helpful?
Average Rating:(5.0)out of 5 stars

love this new piece of Tech

I was very skeptical at first about getting a smart watch saying i would hardly use it. So recently i won a Gear s2 and been using it fr a few days. WOW what a gadget, HOW DID I SURVIVE WITHOUT this assistant on my hand giving me all my notifications on my wrist. Thanks a Million SAMSUNG. Now just waiting for my Free tablet to get here lol.

Reviewed by Bhad007Bhad007
Written by a samsung.com customer.
Helpful?
Average Rating:(5.0)out of 5 stars

I have written before about things. I am not tech savvy and I don't really don't use my Samsung galaxy 6 edge the way that I am supposed to, but I love the combination of both my watch and phone together. I can't hear my phone all the time and missed 2 emergency calls. I bought the smart watch so that I don't miss anything.

I can tell you it goes off with all notifications that are on my phone. I can program everything and anything and my watch lets me know. I realize that it sounds lazy but I have been able to program things for my job also. It vibrates and is non-intrusive. Not like the notification from the phone. Also, I can not carry my phone on my person at work... THIS IS AWESOME !!!!!

My only thing against the watch is that there seems to be no thought process to women. The watch bands are either black or brown. I actually ordered one on the market that I changed it to. I would have like to have the Samsung brand to complete the watch and be able to change it easily. I hope that they consider this for their accessories soon.

Reviewed by calypsocalypso
Written by a samsung.com customer.
Helpful?
Average Rating:(5.0)out of 5 stars

This is truly a smart watch!

Without looking garish and futuristic, this Gear S2 Classic truly is a smart watch.

From turning it on for the first time, it links seamlessly with my Galaxy Note5 and complements it perfectly.

The display is bright and clear, the apps from mail to uber are a joy to use. And all at the same time it looks like a proper watch. As an added bonus, it is water resistant.

The battery life is excellent. So far I have managed 3 days without having to recharge the battery, and that's without setting it to greyscale mode.

Reviewed by Neil3onNeil3on
Written by a samsung.com customer.
Helpful?

1. This model can transmit and receive phone calls.
by CommunityAnswer
Helpful?
2. No, most cannot. The ones that can are generally available only from carriers like AT&amp;T, Verizon or T-Mobile. Those are known as the &quot;Gear S2 3G&quot; and besides cellular data/voice, they include GPS and a speaker.
by Franklin7
Helpful?
2 Answers

1. This item is new.
by CommunityAnswer
Helpful?
1 Answer