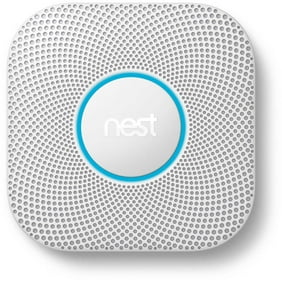 We aim to show you accurate product information. Manufacturers, suppliers and others provide what you see here, and we have not verified it.
Keep your family safer from Christmas tree fires with detection right at the source, before it’s too late! The Safer Christmas Tree Alarm from Safer Alarms is a fire sensor designed as an ornament to be hidden in your Christmas tree. If there's a fire, it will immediately communicate to the included remote alarm. Detect fire faster at the source with this Christmas tree ornament fire alarm system!

I really loved the concept of this alarm. The ornament was bigger than I thought it was going to be, but not so big that it won't hang comfortably on the tree. It measures about 10” around the middle and 4” tall. It's a rather plain design, so I'll probably hang it so it won't be seen. Putting the batteries into the base was tricky due to the fact that it wasn't explained which way the battery compartment opened. I just kept trying different ways, hoping I wouldn't break it before I got it open! (I included a picture that will hopefully help others not have to guess about the batteries.) To pair the two together, I pressed the buttons on both devices a few times until I saw a green light blink. I tested the product by holding the ornament over a candle to see how long it would take to detect the heat. It took about a minute for the bottom on the ornament to get hot enough to detect the danger, but once it did, the alarm was pretty loud. Not sure it would wake you up from a long distance, but I think the point would be to keep the alarm part in your bedroom or a room that you think it would most likely be heard. Overall, I really think it's a useful product and design. I'm definitely going to hang this on my tree this year!

We live Christmas and at our house the tree goes up on thanksgiving. So it is important to know that if I forget to turn the lights off and heaven forbid there is a fire this device will alert us. I like that it takes AA batteries instead of the 9 volt because I always have AA on hand. I like that it is made to blend in with the other ornaments on the tree. I will probably find a secondary location to put the sensor when the tree isn't up. This is a great addition to your Christmas season

I love that this can be used right inside your Christmas tree for fire detection at its source. That gives me a real sense of security for my family. Requires 3 “AA” batteries for operation.