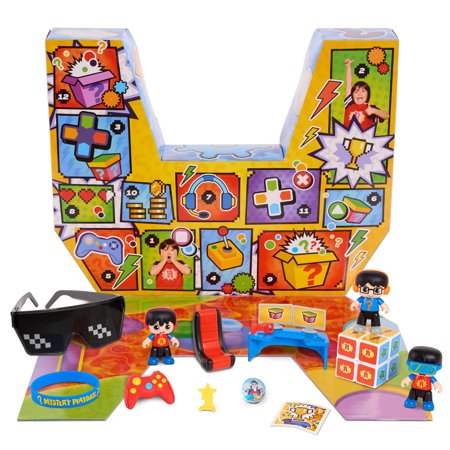 Average rating:4.7out of5stars, based on30reviews30ratings
4.7 out of 5 stars
30 total reviews
5 stars
22
4 stars
6
3 stars
2
2 stars
0
1 star
0
Most helpful positive review
My son loves watching Ryan. When he got the toy he was so surprised. The toy is worth the excitement. Great quality toys. It comes with 3 mini figures that are cute but small so recommend to older children. 4-5+ [This review was collected as part of a promotion.]
Average rating:5out of5stars, based on0reviews
Natosha p, November 20, 2019

Most Helpful Review
Average rating:5out of5stars, based onreviews
My son loves it!
My son loves watching Ryan. When he got the toy he was so surprised. The toy is worth the excitement. Great quality toys. It comes with 3 mini figures that are cute but small so recommend to older children. 4-5+ [This review was collected as part of a promotion.]
1-10 of 30 reviews
Average rating:5out of5stars, based on0reviews

My kids really like to watch Ryan on youtube and on TV. So, this was ana awesome product. It had 12 different spots to open and investigate. I couldn't keep them from doing all of them so they just opened it all together. There was a couple small pieces that my 8 year old took but plenty of options for my 3 year old as well. They love playing with the action figures and take turns wearing the awesome sunglasses! [This review was collected as part of a promotion.]

I received this game to make a 100% honest review. My daughter loved this toy, is one box with more toys in one. And is good to go to everywhere with this toy because they can storage the toys in the box. [This review was collected as part of a promotion.]

This toy is super cute. I've got three girls aged 2-12 and they all love Ryan's YouTube channel. There are 12 doors to open so it was easy to alternate each kid opening the next surprise. All three girls loved it! [This review was collected as part of a promotion.]

I would have never thought of a toy like this existed. This is an actual countdown to a special event (playdates with friends, going on a trip, Christmas even). We used it to countdown a cousin get together this past weekend.

My daughter is 6, and although she's familiar with the days of the week, she doesn't fill comprehend how long that actually is. So instead of her bugging me daily asking when it's time to go see her cousins, we used this super awesome Ryan's World mystery playdate. She had such a blast opening one every day. I will admit, I was worried about the preforated pieces not being easy enough to open, but my daughter opened them with no problem. In fact, she was so excited about this countdown surprise she would wake up and ask if she could open one, and then she would count backwards to each number she was to open next.

Spoiler alert, I'm going to tell you what's in the box.

Inside this fun filled pack (that as you can see is shaped like a controller), are the following:

2 accessories for the mini figures (a remote and trophy)

And finally, a desk with dual screens for the mini figures.

I would absolutely recommend this to family and friends. This was just as much fun for me to see what's behind the doors, as it was for my 6 year old. [This review was collected as part of a promotion.]

Perfect gift for any young child!!!! Ended up getting this for my newly adopted nephew & he's so in love with this game that he falls asleep playing on it all night long. He's 6 years old so this is the perfect game for someone his age or older. He loves everything that is provided in the box & he's also a huge fan of Ryan's games!!!! This product came with a lot of items like the Countdown the days to your birthday, favorite holiday, special vacation, or the start of Ryan's Mystery Playdate Season 2 with the Ryan's Mystery Playdate Gamer Mystery Countdown Controller. Gamer themed articulated figs, like VR Goggle Ryan, Gamer Ryan! The packaging that the product comes in is shaped just like a game controller, very colorful, it also has a picture in the middle of the products that are inside of the package. The design of the package has little designs of a game controller & surprise boxes with question marks & opened boxes to let you know what's inside is full of fun & surprises!!!! [This review was collected as part of a promotion.]

The controller box very easy to prop up for the kids to pop open the little suprises hidden within. Each department is very easy to push open to retrieve the toys inside! My kids had so much fun counting from one through thirteen! Plus so much heavy laughter from getting to poke open the slots. The toys inside the controller box are also very well made, and easy to attach the accessories to their hands. The little game room set up is just so adorable, and my kids are having so much fun toting around the little ryan figures.

Put a smile on my sons face!!!

We got the Ryan's Mystery Playdate Gamer Mystery Countdown Controller and to be honest I really didn't know what to expect. I had seen Ryan on a talk show and heard about his products and youtube success. My son is 7 and he loved it. I was pleasantly surprised at the quality of the 13 items you pop out of the controller, as was my son! He loved getting a new surprise in each spot and putting it all together as a scene to play with. Personally the game controller eraser is my favorite one. I would definitely recommend it to my friends and family!!! [This review was collected as part of a promotion.]

The packaging itself is part of the product which was confusing to me. I ended up ripping open day 5 just trying to get thing thing open because I didn't realize it was just the top flap that you open. I almost took the whole thing apart before I realized it, but luckily I was being careful because I was so unsure so I was able to put it back together with just the one tear. The concept is pretty cool, but I think my 3 year old twins will just end up ripping them all open at once wanting to get the toys out. The whole thing is just a cardboard “controller” with punch out squares for each day that has a toy in each spot. So don't go trying to open the whole thing like I did. Also the numbers aren't in a row. They're kind of scattered everywhere which makes my ocd not happy lol It says for kids 3+ but I think it would be better for kids 5 and over. [This review was collected as part of a promotion.]

I got this as a sample and both my kids liked it though i wish it didn't have some small pieces as kids are curious but the big ones they still play with could be better and there should be. A variation of gift not 3 ryans [This review was collected as part of a promotion.]

We've had this about 2 weeks. My 9 year old doesnt care much for it but my 6 year old loves it. The element of surprise keeps the younger kids entertained. The toys are not quite as exciting as I would have liked but it depends on the age of the kids. None of the toys excited anyone above the age of 6. The toys are made of rubber so they're fairly durable but theres no sound or excitement.... only the element of surprise. [This review was collected as part of a promotion.]

Written by a customer while visiting justplayproducts.com
00

About our prices
We're committed to providing low prices every day, on everything. So if you find a current lower price from an online retailer on an identical, in-stock product, tell us and we'll match it. See more details atOnline Price Match.
webapp branch
Mobile apps
Walmart Services
Get to Know Us
Walmart.com
Customer Service
In The Spotlight
Shop Our Brands
© 2020 Walmart. All Rights Reserved. To ensure we are able to help you as best we can, please include your reference number: ZK6228TQNO
Thank you for signing up!