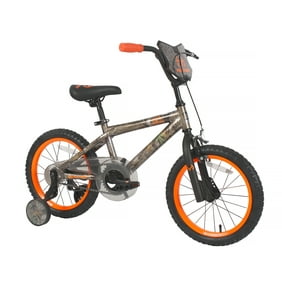 The Granite Peak Mountain Bike by Roadmaster is an excellent all-around mountain bike that is right at home on a rugged unpaved path or cruising the streets in your neighborhood. It sports a steel mountain frame and a front suspension fork, ensuring that each ride is comfortable and easy to navigate. The knobby tire treads provide plenty of security on pavement or dirt roads, while alloy rims offer added durability and stability. This mountain bike comes with 18-speed twist shifters and a Shimano rear derailleur, allowing maximum shifting performance out on the trail. Experience the freedom of taking your Granite Peak all over town. Roadmaster has been a trusted American value in recreational bike riding for decades... have some fun on your next ride.

What others said when purchasing this item
Price
Penny, purchased on September 9, 2020
For my kid
Vinh, purchased on July 16, 2020

Nice bike for a nice price.

I'm 35 years old I weigh 175 pounds. I'm only 5 foot. The reviews I read said get the 24 inch bike so I did. But I think the 26 inch would be better. Its a great bike for the price! I love riding around on my bike with the kids.

This is awesome. The seat in the lowest position is not too high for my son of 4'-8". And the weight of the bike is only 32lbs. I detached stickers on the frames and it looks classy. When shifting gears, sometimes the chain is out, but my son and I really love it.

For the price this bike really has been great! It looks good and rides decent for an around the neighborhood kind of bike. Definitely a little chain adjustment and bolt tightening if you get a pre-built one, but nothing too crazy.

Very good bike for my 10 year old son. Be sure to keep an eye on the cables for the brakes/gears - they may need to be tightened at some point to keep the bike working well. For the price, this is a really good value.

My 9 year old Grandson loves this bike. He has had it over a year. No problems. Since this bike was problem free we bought the lime green one for his brother when he turned 8.

If your front tire won't spin, read this!

After a lot of frustration trying to figure out what was wrong with the assembly, I have finally figured it out. When purchased online, the bike arrives mostly assembled- you just need to attach the tires and handlebars, basically. But the front brakes were not sitting correctly so the front wheel would not spin. I was nearing the point of setting the front brakes so loose that they didn't work at all, when we spotted an issue with the pre-assembly of the front brakes. The cable from the handlebar brake lever to the brake assembly was wrapped around the top of the fork, causing it to sit completely off center. This isn't covered in the instructions because it's a pre-assembled part. Based on the other reviews of how easy it was it put together, we must have just been unlucky. We disconnected the cable, unwrapped it from around the fork, and problem solved! If your front tire won't spin because the brakes will not release, you probably got unlucky too. Now it is all working and looks great! I included a picture of the cable that was wrapped around the top of the fork (where the black meets the gray under the R badge) so you know what to look out for. Ps- the bike comes with a kickstand so you don't need to purchase one separately.

Got this bike for my 11 year old. He loves it. However, the left brake does not work. The wires to it are shredded at the end. The right break works good though. Also the handlebars continue to come loose.

The brakes broke the second time my son used the bike

1. No, this doesn't come assembled.
by CommunityAnswer
Helpful?
2. No, it doesn't come assembled.
by CommunityAnswer
Helpful?
3. The bike will come partially assembled. You will need to attach the handlebars, seat, pedals, and front wheel. Assembly instructions as well as the initial adjustments are outlined in detail in the owner's manual. We are also available Monday-Friday 8am-5pm CST to help with your questions. Thanks, Jen
by SchwinnCustomerSupport
Helpful?
3 Answers