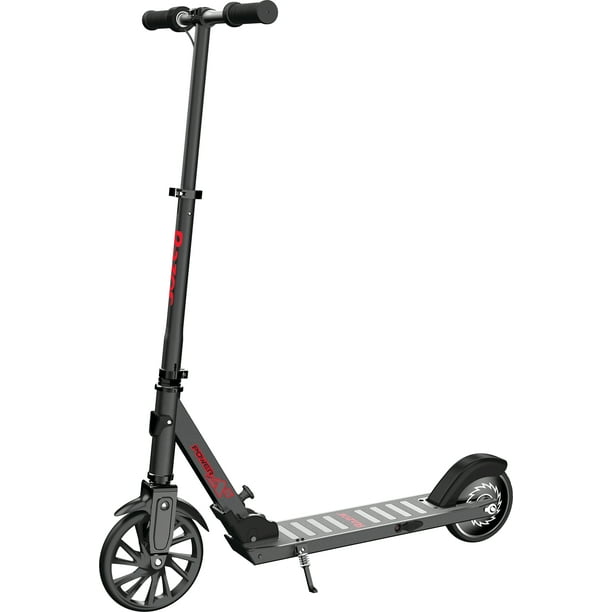 We aim to show you accurate product information. Manufacturers, suppliers and others provide what you see here, and we have not verified it.
Parked at your desk or cruising the neighborhood, the Razor Power A5 Black Label electric scooter makes a stylish statement. With a kick-to-start, high-torque, brushless hub motor that maintains speeds of up to 10 mph (16 km/h) for up to 40 continuous minutes of (permitted) uses, you?Äôll be riding to work, running errands, or hitting the town in style. An extra-large, 8?Äù (200 mm) urethane front wheel and abrasion-resistant, airless rear tire smooth the road so you can travel in total comfort and a patent pending anti-rattle folding mechanism provides a quieter ride, as well as easy portability and storage. Elevate your ride with the Razor Power A5 Black Label electric scooter. 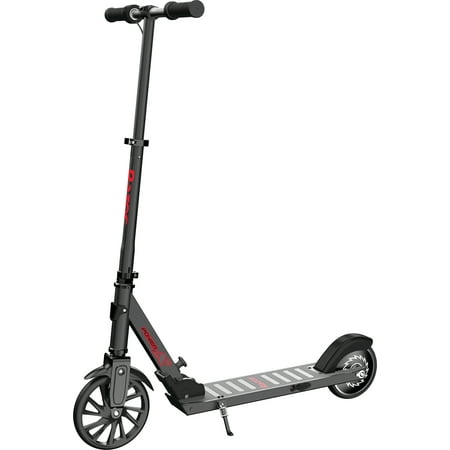 This is Very Cool! It is definitely not a toy, however. This is for sure a motorized device that goes about 10 miles per hour and safety gear is required. A basic knowledge of how to ride bikes or skateboards would also be helpful. Be sure to buy the correct device for your needs. This particular model has an adjustable handlebar so that it better suits the height of the rider. It is easy to assemble and took maybe 20 minutes of time to put together. It takes about 10 hours of charge time on the battery. I think it would be helpful to have a second battery, which we intend to get, just to assure lots of ride time. Perfect for zipping around the neighborhood!

Overall, this scooter is very fun. The kids loved it!

It's very easy to assemble. A 13-year old actually did open the package and assembled the scooter all by herself. She said it was obvious to her how to put everything together and she did not need the directions at all until it came to the handlebars. Once the scooter was assembled, it was plugged in and charged fully before taking it on the first ride. She practiced folding it a few times and that was not difficult.

They took the scooter for a spin around the neighborhood. They said it was nice and smooth on the way up a hill, but not very fast which is probably good for safety. And the scooter was very fast on the way downhill, but the ride got a little bumpy. The handlebars vibrated a lot, but they said the scooter always felt in control. They also noticed that the scooter stopped very quickly when the breaks were pushed. Because it's so much heavier, the kids did comment that it was hard to do tricks with, which from a parent point of view is probably nice.

Overall, it was a total hit. The kids enjoy riding the scooter before school and after school every day. They did notice that the scooter stayed at full power for only about 20-minutes before it started slowing down. That's probably the only area of opportunity. It does not take long to power the scooter back up, but the limited battery power means that they cannot go very far.

One nice feature is that you can still use it like a regular scooter when it does run out of power. I thought it might have drag but they noticed that if they did a few leg pumps along with running the motor, the battery lasted significantly longer.

Overall, great scooter! Great for kids 8-14. I think much older and they would want something faster. Much younger and they might not be ready for it.

This is the coolest electric scooter ever! For the following reasons: 1) Black color looks really nice with brand name written in red 2) The height of the handlebar is perfect 3) Enough space for your feet to be comfortable 4) The ride is extremely smooth 5) Once you push down on the thumb throttle, it feels wonderful. 6) Kickstand is convenient and functional. I also love the size of the wheels. The only dislike I have is that during the initial charging the LED was always green and remained green throughout! So I had to keep tab on time to complete suggested charging time. When I recharged after initial use, the LED was red but didn't take too long for it to turn green. The suggested recharge time is 8 hours even if LED turns green!!! I don't like that I can't rely on LED, I wish they had made this better. This is still minor issue compared to the performance of the scooter. I love it with whole heart.

I received the scooter last week. My 10 year old nephew was our “tester” and he loves it. He's been using it daily ever since. It's light, fast enough for him (10mph). Easy for him to control. It definitely folds up easy, which is a super plus. It also looks good! From a power point of view, it does well on the paved streets around our driveway & neighborhood. As always with rechargeable gizmos, I am a bit concerned about battery depletion, so I'll be watching the battery for the next couple of months. But overall, great electric scooter.

Freaking awesome scooter! Also, I must say, I love Walmart. They go above and beyond every time. Absolutely love Walmart. I don't go anywhere else. I buys everything at Walmart. Literally everything. Even my oil changes and tires. I go to Walmart daily. Even through the Coronavirus epidemic. I always make sure to wear a face mask. Heading there now actually to get paw patrol clothe to make pillow cases. Thank you so much Walmart, from the bottom of my heart. Your blessings are greatly appreciated.

I like this product, My son 8 years old got that as birthday present. He is very happy with that scooter.

My 13 year old son loves this scooter. I also just purchased one so I can ride with him. It?s a very quiet scooter and it can easily go between manual and electric.

So I'll start off by saying how much fun this electric scooter is! I was not expecting it to be as awesome as it is! My (soon to be) 8 year old daughter hasn't put the thing down except when it needs charged or when I pry her off from it! Her father and I even had a great time “unboxing” it when it first came in the mail!

Upon opening you should charge it for 12 straight hours, which we did, and then the battery has its fullest life supposably. I left ours charging for 24 hours and it didn't over heat such as a hover board would. The battery life on the scooter is longer than we had expected as well. We rode on gravel and in the grass, but mostly on pavement and it lasted a good 40 minutes. The only complaints I have about it is the bulkiness and the weight. My daughter obviously can't carry it herself and it is harder to fit in the shed where we store it. Also, I wish they would make the tires more on/ off road, that comes in handy at the parks where we live due to all the pot holes and terrible upkeep of the grounds. But all and all, it's a great product and we enjoy it daily!

I know the company and manufacturer only recommends this scooter for ages 8 and up, but as long as you have proper safety gear and supervision, I would say 6 year olds and up could use this scooter with very little problems. The handle bar comes down short enough that even the smallest 8 year old can ride it safely. My daughter was so excited to try it out I didn't get the chance to take some of the wrapping off before she started using it, and she quickly found out that 10mph is much faster than just scooting around. The bottoms of her boots are a little worn out now.

The construction of this scooter is impeccable. I wouldn't expect anything less from Razor brand though, and I'm happy to report, they live up to their expectations. It's heavy though, and hard to set up if you have arthritis in your hands. The lever to unlock the drive bar is kind of tough to pull. I had a tough time with it. Took me about 3 minutes before I figured it out, even with the directions. I also feel like the throttle is set a little awkwardly, but that could be just because I'm used to driving a motorcycle where you don't have to arch your hand to push the throttle with your thumb.

Aesthetically, the black finish is sleek, and even more so, the design of the scooter! I looks cool enough for an adult to ride to work and a kid to just use to get to the nearest convenient store for a snack. The battery lasts fair distance so unless you live in the boonies, I wouldn't worry about the battery dying from use. Even if it did, manual scooting is ridiculously easy! Perks of darn good bearings!

This is a great scooter!! The new design is sleek and much smaller than the original. Only negative thing I can say is the wheels are hard so everyone bump is felt but the kids dont truly seem to mind.