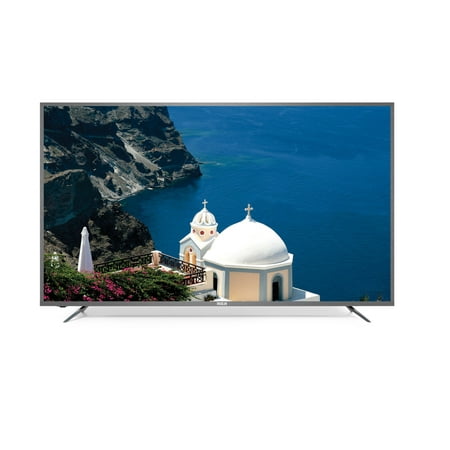 We aim to show you accurate product information. Manufacturers, suppliers and others provide what you see here, and we have not verified it.
Don't just watch TV. Fully experience your favorite shows on the 75" RCA 4K TV. The RCA 75" 2160p Class LED 4K UHD TV features a brilliant 2160P 4K Ultra high definition picture for your viewing pleasure. 4K Ultra High-Definition displays have four times the number of pixels as a Full HD display, turning your shows into the ultimate UHD viewing experience. Time to take your entertainment experience to a new level! The unequaled color and clear brilliance of 4k will provide more natural and lifelike images than have ever been viewed on your screen. See it all with enhanced picture quality, including a wider spectrum of colors. The RCA 2160p LED 4k UHD TV has a true 16:9 aspect ratio, so you can view your movies as the director intended and see a clear picture from anywhere in the room. It also has a built-in digital tuner. Four HDMI ports allow you to connect multiple devices at once, so you can stream, browse, and listen to all of your favorite multimedia.
RCA 75" Class 4K Ultra HD (2160P) LED TV (RTU7575):

Incredible deal - didn't cost much more than a lot of 65" out there! This thing is HUGE - 75" is sooo much larger than my old 65". Picture is fantastic - great color and detail (you would expect that from a 4K TV). Really pleased with purchase.

Perfect TV, well worth the money!

Absolutely my favorite TV. It's huge, obviously, but the picture is great. The sound is decent, but if your not willing to get a good sound system -then why bother getting a 75" TV? The remote is shabby and I haven't really found a decent remote on ANY TV other than the tiny remote for the ROKU TV's I've bought from RCA as well. Ok, so the reviews saying lines on the screen and all the other crap about it being broken, cracked, upon receipt, that sucks but you should just return the TV and get an ACTUAL WORKING TV, silly people. Now fro the picture and overall watchability... When your watching older movies it looks amazing, and newer movies it also looks amazing but, you can definitely tell the slight difference between, say, a newer Sony HDR 4K TV, same with live sports, the TV does great and you will love it, but you would definitely notice a slight difference between the newer 4K TV's out there, (but you'll have to pay 3 or 4 times as much$$$). I have had super expensive 4K TV's where it feels like I'm always watching 3D and the picture just seems 'fake' for lack of a better term, you DO NOT get that from this TV. If your watching a new movie or live sports, which pretty much everything is in 4K for now, (probably soon going to like 8K or something crazy) the picture is awesome, you will be amazed! You will not get a crazy detailed 4K picture from this, it feels like more of a 1080p style picture, but it works amazing for movies and sports! I'm pretty sure it has an optical audio out for your receiver or soundbar and has multiple HDMI inputs for BluRay, Firesticks, etc. It's by far the best bang-for-your-buck TV out there. So, yes the remote isn't great, but it's good. The sound isn't great, but it's good. The TV itself, awesome!!

I'm enjoying my early Christmas present to myself. I love everything about the 75” television. I feel like I'm sitting in a movie theater watching the big screen. The only thing that I don't like about the television is the sound quality. I'm going to invest in a great sound bar or surround speakers to make up for the sound quality. For the low price that I paid for it on Black Friday, I can't really complain.

Bought this tv on sale, the price was very good for the size.

When I first turned on the tv I was pleasantly surprised by the quality of the picture. Colours are vibrant and the blacks are deep. I was worried about the blacks because I was switching from a plasma tv. Unfortunately the uniformity is poor on this tv. It's particularly bad when watching hockey, the ice appears "dirty" in spots. It's a bit hard to live with if you watch sports. I'm on the fence about returning this tv, just don't know what other tv I should get?

Ps This tv does not have an HDR mode

You probably can't beat it for the money, BUT the screen has a bunch of vertical stripes in it. I read this is other reviews and hoped I wouldn't have this problem, but I do. It's still a great tv for the money.

Purchased this a few days ago. Really cool TV ....but the vertical lines and poor sound quality make this a sketchy purchase.

For Plain Display, It's ok.

Here's the bottom line: If you need a 75" screen TV for simple PowerPoint presentations, this RCA TV will do. But if you're buying it to enjoy movies, don't even think about it. The picture across the screen is inconsistent no matter how much you adjust it. This will annoy you. If you want a budget 75" with a crispier and sharper picture, Hisense might be your better choice. It offers HDR technology and in general, its build quality is better than RCA's. I have no interest in promoting either brand since I'm not fond of either. The better TV's are made by Samsung, LG, Sony, etc... But they're more expensive of course.

I bought this TV in January 2018. When I received the TV it had vertical lines through the display. I contacted the company right away and sent everything the requested. Pictures, proof of purchase, all my personal info. Now it's been 2 months and I have heard nothing back from the “warranty” department. I keep calling RCA to follow up... but there warranty department doesn't have a contact number, I can only contact through email. So the rca number I call and only report that I've called but I can't be transferred. It's very frustrating. When you buy a TV you want it to work properly. I WOULD NOT BUY THIS TV! It would be great if it worked right.. but if not there's no support.

Big TV at reasonable price, but not as advertised

This 75" Tv was purchased on the Boxing week sale for a great price. The drawbacks are many however....The sound is horrible and will need to add a sound bar if you wish to watch any shows with dialog. This TV is advertised at 120HZ, and I have exhasted all options and settings and 60Hz is all the TV is able to run at. The screen is big, and tweaking the colours did help with the quality, however this is far from the quality of my LG TV. Price is great, but for a reason.

Known issue with it. Gray lines!

As soon as I bought this TV I noticed faint gray lines in the picture. Watching hockey games the screen looked dirty at times. Had this dark film to the picture. I finally after almost a year of owning it I decided to call RCA to have them return it for a refund. They were actually very good with the warranty process. I went out and bought a 75 inch Samsung UHD HDR+ TV and absolutely love it. What a difference in picture and quality. The actual picture clarity of the RCA wasn't that bad, after reading several other reviews about the "dirty look in the picture" and faint gray lines, I knew this was a manufacturer default in these TVs. Spend an extra few hundred and get yourself a better quality TV.

Written by a customer while visiting walmart.ca
00

1. No, this model does not have a silver/chrome bezel.
by CommunityAnswer
00
1 Answer

1. Yes, this does have HDR.
by CommunityAnswer
00
1 Answer

1. I did not want to buy a piece of furniture to hold up this T.V., so I got a Magnolia mount , stuck it on the wall .Looks just fine.
by chapulin
00
1 Answer