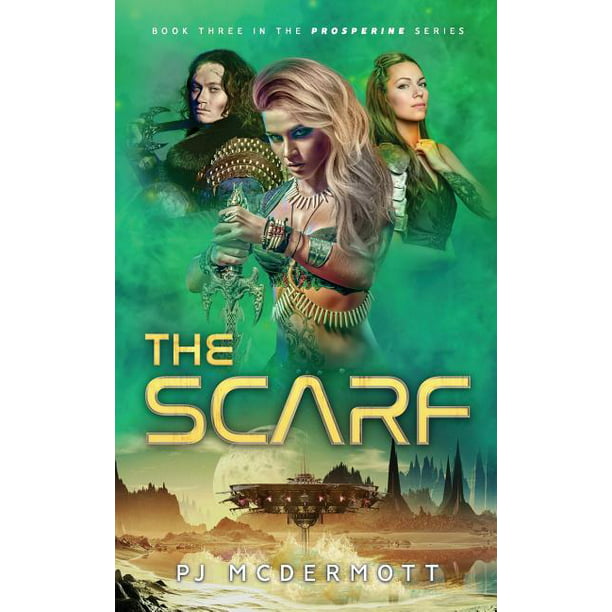 The high-tech sword of the long dead heroine, Connat-sèra-Haagar lies hidden in a remote corner of the planet Prosperine. Alarm bells clamor within the Galactic Alliance when a Bikashi jet is spotted in the area. The sword is a symbiotic weapon that bestows great power on any who wield it and in the hands of the Bikashi Empire, it would pose a dangerous threat to Earth.

The Alien Corps' Hickory Lace and her team are sent to investigate. Their destination is an area known as the Scarf--six hundred miles of floating islands and reefs on the equator covered with swamp and jungle.

In this, the third episode of the highly recommended sci fi series, Prosperine Hickory faces her greatest fear, discovers the secret to the planet's past, and unravels the mystery of the Teacher.

If you enjoy scifi books with strong female characters, then you'll love this science fiction space adventure by PJ McDermott. The Scarf is a young adult scifi mystery that's guaranteed to keep you guessing until the last page.

Join Hickory in her quest for galactic truth!

Although The Scarf is great to read as a stand-alone adventure, PJ McDermott's fantastic space adventure series is best read in chronological order:

What readers are saying about this series.

"A Great read. Had me at the first chapter. Did not want to stop. Love the plot, the storyline, the action!!"

"Great characters; storyline with action, drama, and fast-paced intrigue; and unique description of an alien planet, society and its population. Highly recommended. I would get other books in the series."

"McDermott creates a very original and hopeful future world similar to the kind of sci fi I grew up loving. His alien characters are delightful and believable. I could not wait to read the second book, Rise of the Erlachi which is even better!"

"This is a full-blown outer space action adventure. Well described characters and a story that has a nice flow to it. I read it straight thru cover to cover."