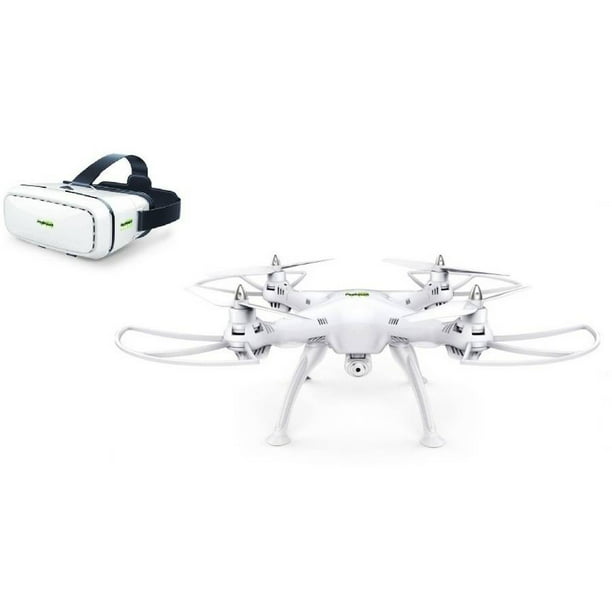 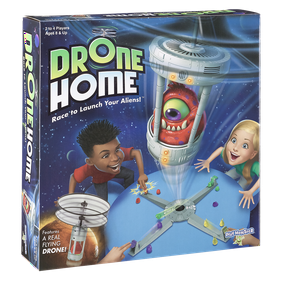 We aim to show you accurate product information. Manufacturers, suppliers and others provide what you see here, and we have not verified it.
The Promark Virtual Realty Drone takes you to the air by combining our easy-to-fly HD camera drone with our premium Promark VR 3D Goggles (included). With its own built-in WiFi signal, the P70-VR Virtual Reality drone allows you to stream, record and photograph live 720p HD footage direct to your smartphone via the FREE Promark VR aerial photography app. Want to get up in the air yourself? Switch the app into 3D mode and see the world from a higher plane with the fully immersive Promark VR 3D Goggles (included in every set). With auto takeoff and landing, headless mode, one-button 360-degree flips and a powerful Li-Ion rechargeable battery, this drone is easy to fly and perfect for capturing life's greatest moments from the skies above. For more how-to's, tips, and tricks, check out out our Promark VR YouTube channel: https://www.youtube.com/channel/UCZIE6EbY7wL75m-hWbx-_1g

This product may require registration with the FAA prior to operation. To learn more, please visit www.faa.gov/uas/registration

I did my research before buying this quad, and for the money this one had the best set of features available in the price range. Has the longest distance of 300 m or roughly 900 feet it has built-in streaming, and had one of the longest flight times at 12 minutes or so. The only thing it lacks is a GPS functionality for returning to its take off point automatically but I didn't really feel I needed that and it hasn't been an issue for me at this point. It is very easy to fly it almost flies itself is very easy to keep track of his long as you keep it within a line of sight. It is Laura enough that you do need to contact the FAA and spend the $25 to register in the FAA in case you fly anywhere near an airport. I have been able to fly mind a couple times now and I am not disappointed. This is a great quad and super fun to fly .

It's great for beginners like me and very easy to use. Please note that there is a clear film over the camera lense that you need to take off for a clear picture and DO NOT use your phone's outlet adapter because it won't charge all the way.

Awesome Product for the money. It is much more than I expected. The one thing I would like to mention is there is a clear film over the camera lens that you must remove before using camera. Make sure you don't use your iPhone charging block when charging drone. It will not fully charge and you will only have about a 4 minute flight. This is a really cool drone and the 720p is gives you an awesome view with lots of vivid colors in HD. I highly recommend this drone to anyone that is serious about flying one. Not suggested for younger kids. With patience this is a great for a beginner learning to fly using a camera with real-time video streaming!

Great drone for a great price.

Very pleased with my purchase I got it on Black Friday. This Drone comes with everything and is very easy to fly. Takes good video and pictures. I have a full unboxing and review video out on YouTube you can watch for reference. If you not sure this is a great product Walmart has in the stores. There is a quick snapshot I took in my backyard. You wont be disappointed. Keep in mind this is a larger drone and will need to be registered with the FAA.

This is my second drone, and to be honest I love it. It works great, as long as it's not raining outside or super windy. It's very easy to fly due to the flashing lights to indicate where the front is, as long as you have some drone flying experience. I recommend an open field when using it, for beginners. For the price it is very durable considering I have flown it into a house, and a tree it still flies. With my only having to replace a blade. The battery life is about 10-15 minutes on a 2-3 hour charge at most. I am very happy with this drone. I highly reccomend it.

This was my first drone purchase. I could have spent less but didnt want a small drone that would be pushed around in light breezes. I could have spent much more but didnt want an expensive drone that id be devastated if I crashed and broke it. This drone is ideal.It holds its own in windy conditions and is easily repared when as a beginner I crash it. Thankfully it comes with spare parts. Camera and video is fine for what you purchased. If you need high dollar camera shots buy a high dollar drone.

I purchased this product as my first Drone. At first I was Leary about flying but after research I found I have to register with the FAA. No big deal at all. First call to airport asking if I could fly was scary then they said ok you can fly...Off the bat controls were smooth and ez to control. Took a picture. Then waited until sunset and got some awesome sun set shots ...with watching the how to videos you to can be up and flying like a champ in no time! Here are the first 2 pics I took from my new drone!

I got this Drone as my first and i have a lot of fun with it. it does everything that it claims to do. Only thing is that the phone download is a little hard to work(no user friendly) but once you get it going its cool to fly the drone with the VR Goggles. But the goggles aren't required to have to still have fun and or operate the drone. Camera is cool but don't use it that much. Best thing was and recommend is to get the 2 year free replacement plan. best $15 ever spent. i have used it twice. HAHAHA

This is an okay drone if you only want to spend about $100, and you only want to fly it at very short distances , and you're kinda sorta interested in the VR goggle experience, and you're satisfied with low quality images and short flight times. Before you choose this - or any other - drone, do some careful reading first about the wide range of products available so you'll know exactly what you're getting (and not getting). I see that some people complained about the smartphone app not working, but I had no trouble with that. The real limitation was that this drone is incapable of delivering satisfying aerial photo/video results. I returned it after realizing I need to spend quite a bit more money on something that will deliver what I personally am looking for.

We bought this on Thanksgiving night for a Christmas present for our son. He would be thrilled. When he opened it he was excited. Imagine the disappointment when it would not fly correctly - one of the arms would not light and the propeller would not spin correctly. So it "flew" across the garage and into the work bench. We went to return it and there were no more in stock. He was quite disappointed. They promised me the first one that came in for an exchange. In the meantime, I ordered one online and picked it up on vacation out of state. When we tried it - it flew - only sideways and would not respond properly to the controls. Finally it landed (hard) and when we picked it up and one of the legs fell off. It looked like the screws had been overtightened in the assembly process. When the third one finally came in (and we tried it), it flew perfectly - up, down, side to side, etc. The only problem was that on this one the camera didn't work!!! It wouldn't move like the other ones did. SO, we returned them and are off to the hobby store to buy a REAL one!

1. From what I gather the Syma drone accessories match up with this drone perfectly.
by Worm
Helpful?
2. From my research, it looks like the Syma propellers are completely DIFFERENT from the Promark blade. It appears to be the wrong size and wrong mount so be wary of that advice!
by ColorRedFansDad
Helpful?
3. Just to add - Syma x8 DOES appear to be the same, however, others like Syma x5 are NOT the same.
by ColorRedFansDad
Helpful?
4. You can now order spare parts on line at Walmart.
by droneman
Helpful?
4 Answers