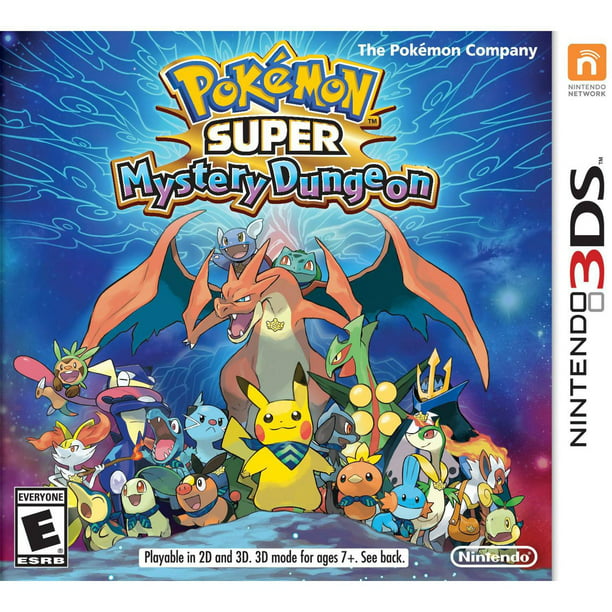 We aim to show you accurate product information. Manufacturers, suppliers and others provide what you see here, and we have not verified it.
The definitive Pokemon Mystery Dungeon! Prepare yourself for a grand adventure where you become a Pokemon and battle alongside Legendary and Mythical Pokemon to help save the world! Befriend Pokemon and explore ever-changing mystery dungeons with them! Players are suddenly transformed into a Pokemon and sent out to a world inhabited only by Pokemon. From a group of twenty Pokemon including the starters from core RPG Pokemon games plus Pikachu and Riolu, you can choose your Pokemon and your partner Pokemon! Battle alongside your partner Pokemon who will become your best friend as you investigate ever-changing dungeons. Befriend and interact with all 720 known Pokemon as you attempt to save the world from a crisis in a tale of unprecedented scale! The possibilities are limitless!

This was a Birthday present for my Grandson. He loves this game. Walmart.com is easy and reliable. As Grandparents it's not always easy to even know what an eight year old wants, let alone where to find it, or what it looks like. This site helps out a lot. Thanks for making us the "Cool" Grandparents.

Great title and great price, I bought it before Black Friday and got it for $26!

My daughter absolutely loves this game and I got it at a cheaper deal then you would at the main store. Well worth the price. Very happy customer.

My son loves this game. Only problem is he got this same game from someone else also, so I must find a replacement. Hopefully the return will be as painless as the purchase/pick up.

Best price around. This is a Christmas gift for our grand daughter. I was told that even Adults are into Pokémon.

Enjoyable game with a decent storyline.

This is a gift

This is a gift but I'm sure my granddaughter will love it.

GREAT GAME FOR YOU KIDS TO ENJOY IF THEY PLAY POKEMON. SOMETHING DIFFERENT FOR A CHANGE.

My opinion may be a bit biased considering the old edition of Pokémon Mystery dungeon (Explorers of Sky) is my all time favorite game, and while the graphics have been intensely heightened with 3d modeling and a whole new story has been introduced with the mystery dungeon concept still intact, I was honestly a little disappointed. I mean this game and it's story are pretty great and I had a lot of fun with it, but in comparison to the older versions (other than the graphic quality) everything was a bit lacking, almost none of the old charm carried over, the characters were very scripted and felt lifeless, the sense of adventure was lost with all the hand-holding the game does, there was no feeling of danger that the old game presented, and all together the game was over very quickly with nearly nothing to do post-game. Being $40 when I bought it, I had a few regrets with this purchase. When doing a remake of a game, it is imperative to IMPROVE on the previous concepts, and while the game did add it's own spin with mega evolution and newer generations of pokemon, it did nothing to recreate the immersive adventures, fond characters, or self accomplishment that it should have had. I gave the game 3/5 instead of 2/5 because if it did, at least, have an interesting story.

Haven't played so far but it seems OK

If you would like to share feedback with us about pricing, delivery or other customer service issues, please contact customer service directly.
1-2 of 2 questions
by smokeyNovember 15, 2015